Joe Biden was sworn in Wednesday as the 46th president of the United States. Newsday's Faith Jessie took us through the ceremony live from our new studio. Here's a look back at the highlights of the coverage. Credit: Newsday

WASHINGTON — Joseph R. Biden was sworn in Wednesday as the 46th president of the United States, assuring a nation confronted with competing crises that "unity is the path forward."

"Democracy has prevailed," Biden said in his first address as president. His declaration was delivered from the west front of the U.S. Capitol, where two weeks earlier a violent mob, heeding the calls of outgoing President Donald Trump, stormed the halls of Congress looking to upend Biden’s victory.

Biden and Vice President Kamala Harris, the first female elected to the post, took the oath of office in a scaled-back ceremony that reflected the struggles of an ongoing pandemic and a bruising election.

Masked lawmakers and dignitaries, screened hours earlier for COVID-19, sat several feet apart, underscoring the monthslong battle to contain the virus. National Guard troops lined the perimeter of the U.S. Capitol complex looking to ward off threats of violence that have emerged in the wake of the Jan. 6 attack. The National Mall, where thousands of spectators gathered to celebrate previous inaugurations, was instead lined with thousands of miniature flags representing the Americans who could not attend because of coronavirus restrictions and the recent security lockdown.

What typically has been a ceremony attended by some 200,000 lawmakers, dignitaries and presidential supporters was pared back to 2,000 attendees.

The most notable absence was Trump, who opted to skip the inauguration and fly to his Palm Beach, Florida, estate, making him the first outgoing president in 152 years to miss his successor’s swearing-in.

Trump, the nation’s first twice-impeached president, promised in a brief speech at Joint Base Andrews: "We will be back in some form."

A forthcoming impeachment trial in the U.S. Senate will determine if the incitement of insurrection charge approved by the U.S. House last week is upheld and whether Trump should be barred from ever holding public office. 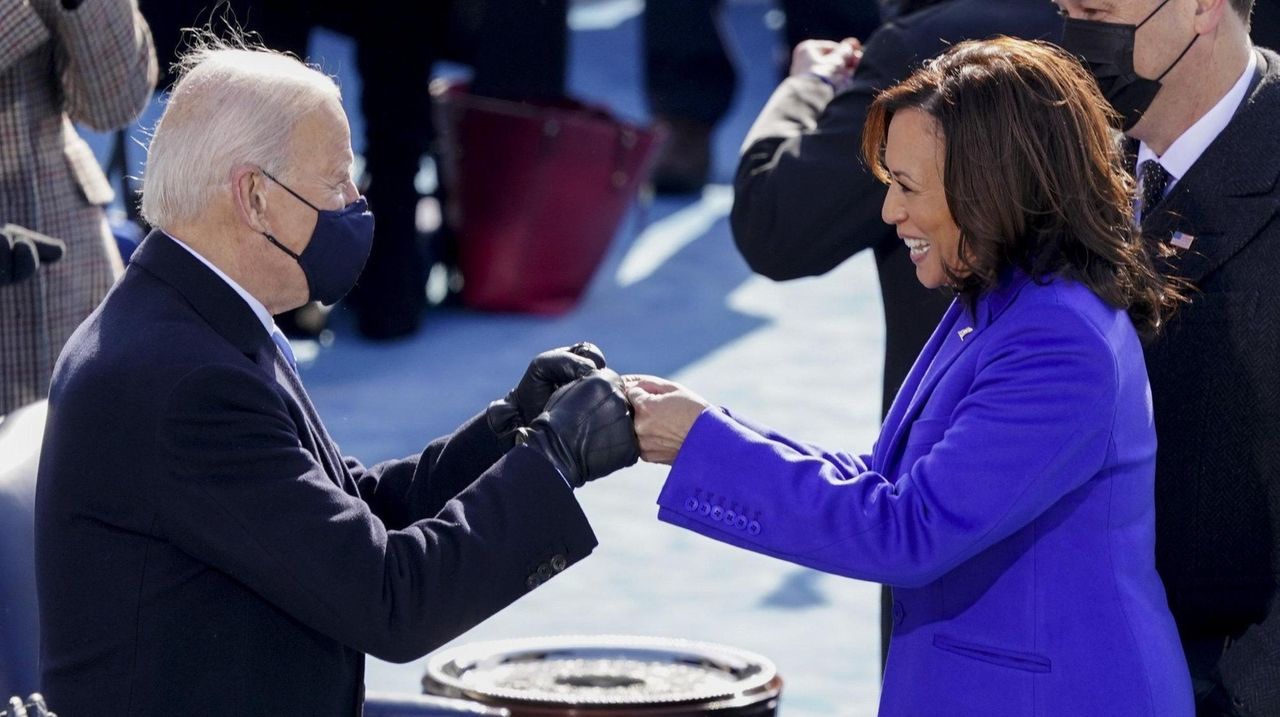 LIers react to the inauguration of Joe Biden and Kamala Harris Long Islanders and some of the politicians that represent them weighed in on the beginning of the Biden-Harris administration. Cecilia Dowd reports. Credit: Newsday / Laura Figueroa Hernandez; Howard Schnapp; AP; Facebook / Joe Biden; Twitter / The White House

The White House said Trump maintained the tradition of leaving his successor a note before departing. Biden, asked about the note, said it was "a very generous letter."

Biden did not name Trump in his 21-minute speech; instead he pledged to move the country past what he described as a polarizing period where "there are lies ... told for power and profit."

"Politics need not be a raging fire destroying everything in its path," Biden said. "Every disagreement doesn't have to be a cause for total war, and we must reject a culture in which facts themselves are manipulated and even manufactured."

Promising to be a "president for all Americans," Biden appealed directly to those who did not support his candidacy, asking them to "hear me out as we move forward. Take a measure of me and my heart. And if you still disagree, so be it." 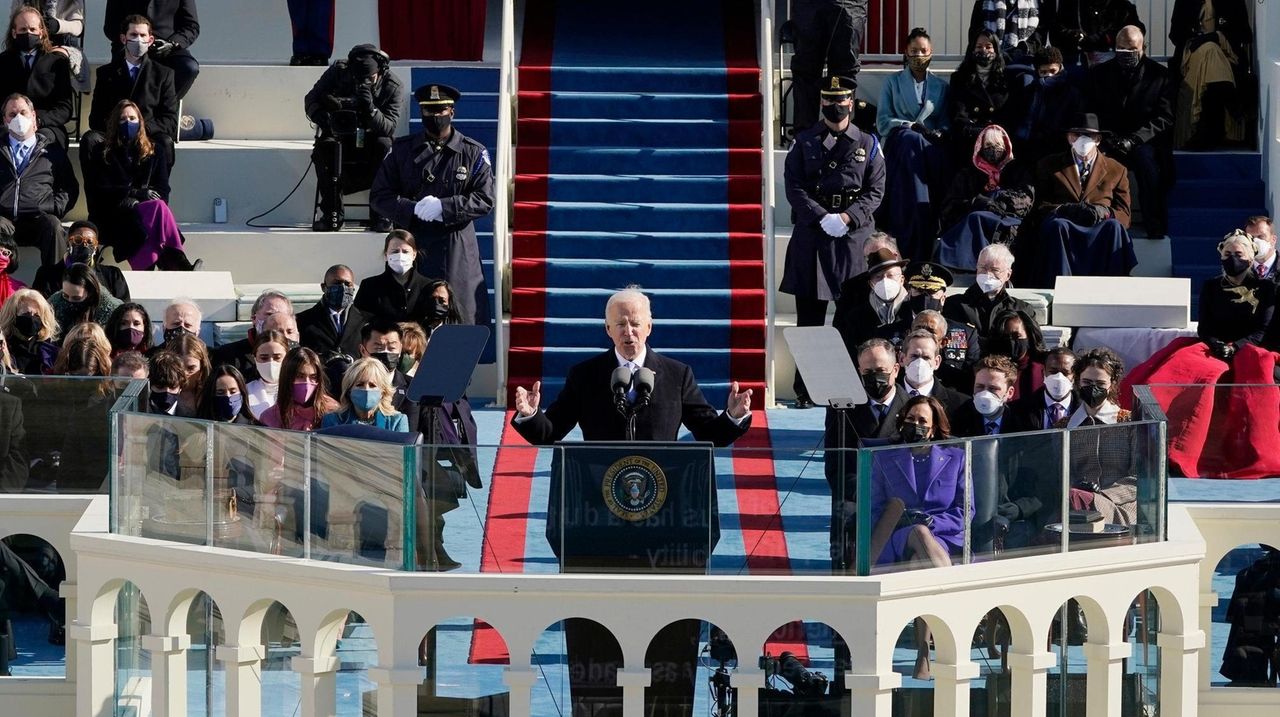 Watch: Joe Biden calls for unity in inaugural address President Joe Biden assailed "a rise of political extremism, white supremacy, domestic terrorism, that we must confront and we will defeat." Credit: AP

"The right to dissent peaceably, within the guardrails of our Republic, is perhaps our nation's greatest strength," Biden said. "Yet hear me clearly: Disagreement must not lead to disunion."

Throughout his speech, Biden, 78, took the tone of consoler-in-chief, telling a nation fraught with widespread unemployment and a coronavirus death toll of more than 400,000 that he understood "many Americans view the future with some fear and trepidation."

He called for an end to "this uncivil war that pits red against blue, rural versus urban, conservative versus liberal."

After a summer of nationwide protests calling for policing reforms in the wake of high-profile officer-involved deaths of Black Americans, Biden said he believed the country could reach "racial justice."

Newsday's inauguration coverage recap Joe Biden was sworn in Wednesday as the 46th president of the United States. Newsday's Faith Jessie took us through the ceremony live from our new studio. Here's a look back at the highlights of the coverage. Credit: Newsday

"I know speaking of unity can sound to some like a foolish fantasy," Biden said. "I know the forces that divide us are deep and they are real. But I also know they are not new."

The entire Long Island congressional delegation was on hand for Wednesday’s ceremony, taking in the day’s events — including performances by singers Lady Gaga, Jennifer Lopez and Garth Brooks — as snow fell sporadically on a blustery day.

"I really have great confidence that Joe Biden is going to bring people together," Suozzi said, noting that he endorsed Biden minutes after he entered the crowded 2020 presidential race.

Last year, Biden emerged the victor from a field of more than 20 Democratic presidential hopefuls, eventually tapping Harris, a U.S. senator from California and the daughter of Jamaican and Indian immigrants, to be his running mate.

"I hope it is the start of a new era in Washington, where we finally put the politics of hate and division behind us," Rice said. "I hope it is when we can begin to heal and come together once again."

Rep. Andrew Garbarino (R-Bayport) was among 16 freshman House Republicans who penned a letter to Biden promising to "work together on behalf of the American people."

"We firmly believe that what united us as Americans is far greater than anything that may ever divide us," the lawmakers wrote in the letter.

Garbarino, who succeeded longtime Rep. Peter King (R-Seaford), said the freshly minted group wanted to "make sure we have a good working relationship in the future" with the new administration.

Rep. Lee Zeldin (R-Shirley), a staunch Trump supporter who two weeks ago objected to the certification of Biden’s Electoral College victory, said in a statement "there will be many vibrant debates to be had over the next four years," before adding, "Let us work towards ensuring they will always remain in the spirit that serves the betterment of our great country."

After the swearing-in ceremony, Biden and Harris visited Arlington National Cemetery to pay homage to the country’s fallen soldiers. They were joined by Clinton, Bush and Obama. Biden’s late son, Beau, who died of brain cancer in 2015 at the age of 46, was a major in the Delaware Army National Guard and served in Iraq.

The president and vice president and their spouses also walked briefly along Pennsylvania Avenue, in a scaled-back version of the parade that usually leads the way for both to enter the White House. At night, they participated in a primetime televised celebration hosted by actor Tom Hanks that featured performances from Bruce Springsteen, John Legend, Jon Bon Jovi and others.

Biden, who served eight years as vice president under Obama and who spent more than three decades as a U.S. senator, returned to the Oval Office and took a seat behind the Resolute Desk as the nation’s new commander in chief.

In a sign of the times, Biden swore in via a Zoom teleconference hundreds of political appointees who will staff his administration, and also signed a series of executive orders, including mandating masks on federal property, rejoining the Paris climate accords and providing "support for underserved communities."

Biden eyes ambitious agenda on pandemic, economy, racial equalityThe top priority will be a proposal for a $1.9 trillion pandemic relief and stimulus package. Biden's inauguration goes off with no security issuesLaw enforcement officials contended not only with the potential for outside threats but also with rising concerns about an insider attack. Officials were monitoring members of far-right extremist and militia groups, increasingly concerned about the possibility such groups could stream into Washington and spark violent confrontations, a law enforcement official said. 5 things to watch for at the Biden/Harris inaugurationBiden is expected to amplify his appeal for unity in the wake of the attack on the Capitol. 1600: At high noon, Biden to offer hopes of a united USAAfter taking the presidential oath, Biden plans to call on politically divided Americans to unite to heal the nation's wounds from health and economic crises.