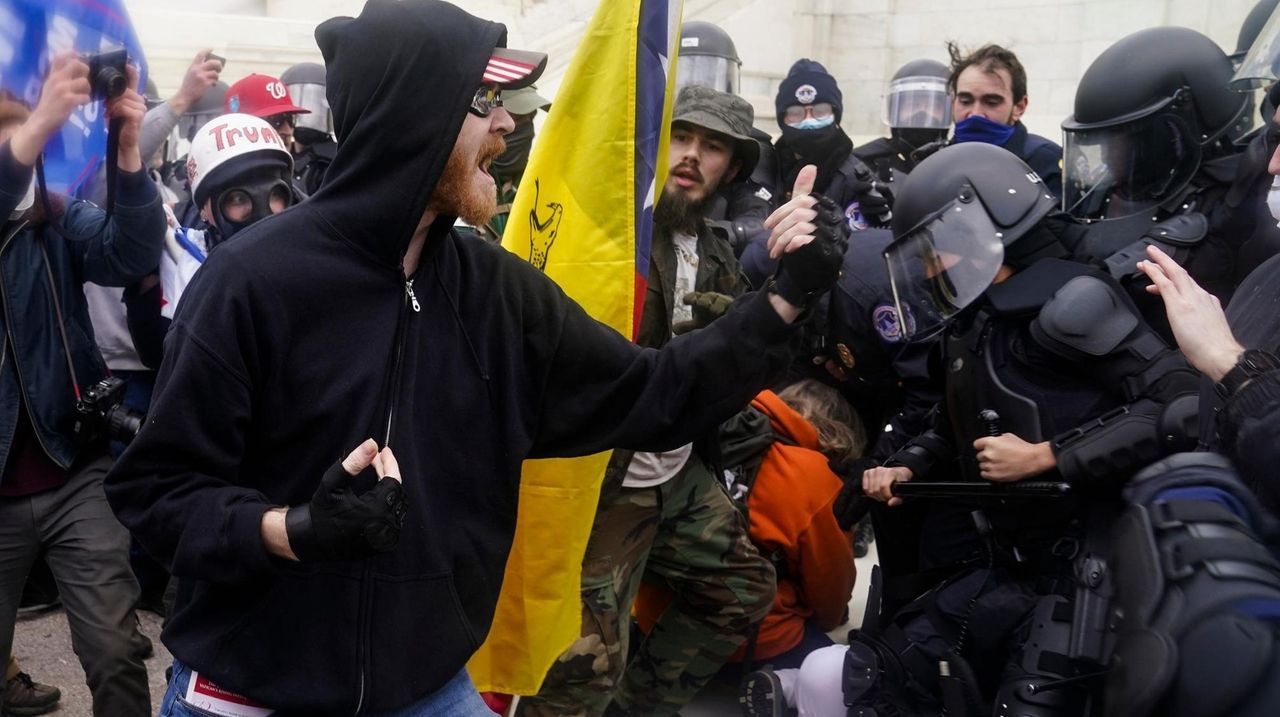 WASHINGTON — President-elect Joe Biden, Democratic lawmakers and civil rights groups on Thursday decried what they described as dramatically different responses by law enforcement to the Trump supporters who stormed the U.S. Capitol on Wednesday, compared with those who gathered at Black Lives Matter marches last summer.

"You can’t tell me that if it had been a group of Black Lives Matter protesting yesterday, they wouldn’t have been treated very differently than the mob of thugs that stormed the Capitol," Biden said during a news conference in Wilmington, Delaware. "We all know that is true. And it is totally unacceptable. Totally unacceptable. The American people saw it in plain view."

Images and video posted to social media of Wednesday’s attack on the Capitol showed pro-Trump demonstrators overwhelming U.S. Capitol police, with officers in several instances stepping aside as the crowd spilled into the hallowed halls of Congress.

Lawmakers and activists said those images were a far cry from the phalanx of riot-gear wearing officers who deployed tear gas and batons to push back Black Lives Matter supporters outside of Lafayette Park for a Trump photo-op outside of St. John’s Church last June.

Sen. Kirsten Gillibrand (D-N.Y.) said there needs to be "a hard look at why the planning" for the pro-Trump protest on Wednesday was so different from the planning for the Black Lives Matter protests.

"During Black Lives Matter protest, I saw pictures of police forces and other personnel with military-style weapons and uniforms lined up in significant numbers on the Capitol grounds to protect the Capitol grounds," said Gillibrand in a news conference, adding that on Wednesday, "We did not use that same show of force."

Civil rights groups including the NAACP and ACLU said there was a disproportionate response, noting that despite all the damage to the Capitol complex, including shattered windows, broken benches and stained statues, there were only 26 arrests made on the Capitol grounds on Wednesday compared to the 88 arrested at a Black Lives Matter protest earlier in the summer.

"We shudder to think how police departments would have responded had Black and Brown people stormed a government building to protest police brutality," the American Civil Liberties Union wrote in a tweet.

The FBI on Thursday called on Americans to contact the bureau with information identifying those who breached security and entered the Capitol building.

Derrick Johnson, president and chief executive of the NAACP, one of the nation’s oldest and largest civil rights organizations, drew contrasts between Wednesday’s response and the Aug. 23 shooting of Jacob Blake, a Kenosha, Wisc. Black man who was left paralyzed after being shot in the back by police. Tuesday a Wisconsin prosecutor announced he would not bring charges against the officer who shot Blake.

Johnson in a tweet wrote: "The day after we watched a complete travesty of justice in the shooting case of #JacobBlake, an unarmed man shot IN THE BACK after attempting to break up an incident, we see ARMED TERRORIST storm the Capitol of the USA with little to no recourse! #ThisIsAmerica."

The NAACP also took aim at Trump and his supporters who for years criticized former NFL star Colin Kaeparnick and other pro-athletes for taking a knee to silently protest police brutality against Black Americans.

"And you thought ‘Taking A Knee’ was too much!?!" the official Twitter account for the NAACP tweeted.

The organization posted a video on its Twitter account showing a U.S. Capitol police officer agreeing to take a photo with one of the protesters who forced their way into the Capitol building.

"It’s a dark day in America when a UNITED STATES Capitol police officer decides to take a selfie with a TERRORIST! And they wonder why WE don’t feel safe!," The NAACP wrote in a tweet.

Dennis Kenney, a professor at John Jay College of Criminal Justice who has advised police departments in the U.S. and abroad, said any investigation into the Wednesday’s security lapses should include examining whether there was "deliberate foot dragging."

U.S. Capitol Police Chief Steven Sund defended the response on Monday, saying "the actions of the USCP officers were heroic given the situation they faced.″ Hours later, he stepped down from his post.

The department said more than 50 officers were injured during Wednesday's attack, adding that several officers were "hospitalized with serious injuries."

Biden urges restoring decency after 'assault' on democracyBiden had planned to deliver a speech focused on how to revive an economy and provide financial relief for small business owners reeling from the coronavirus pandemic from his native Delaware. Zeldin to object to count of electoral votesHe endorses claims of fraud, despite Trump repeatedly failing to prove that in court. What to know about Electoral College vote countJan. 6 marks the official Electoral College vote count for president. But the largely ceremonial process that takes place in a joint session of Congress is being challenged this year by President Trump and allies.