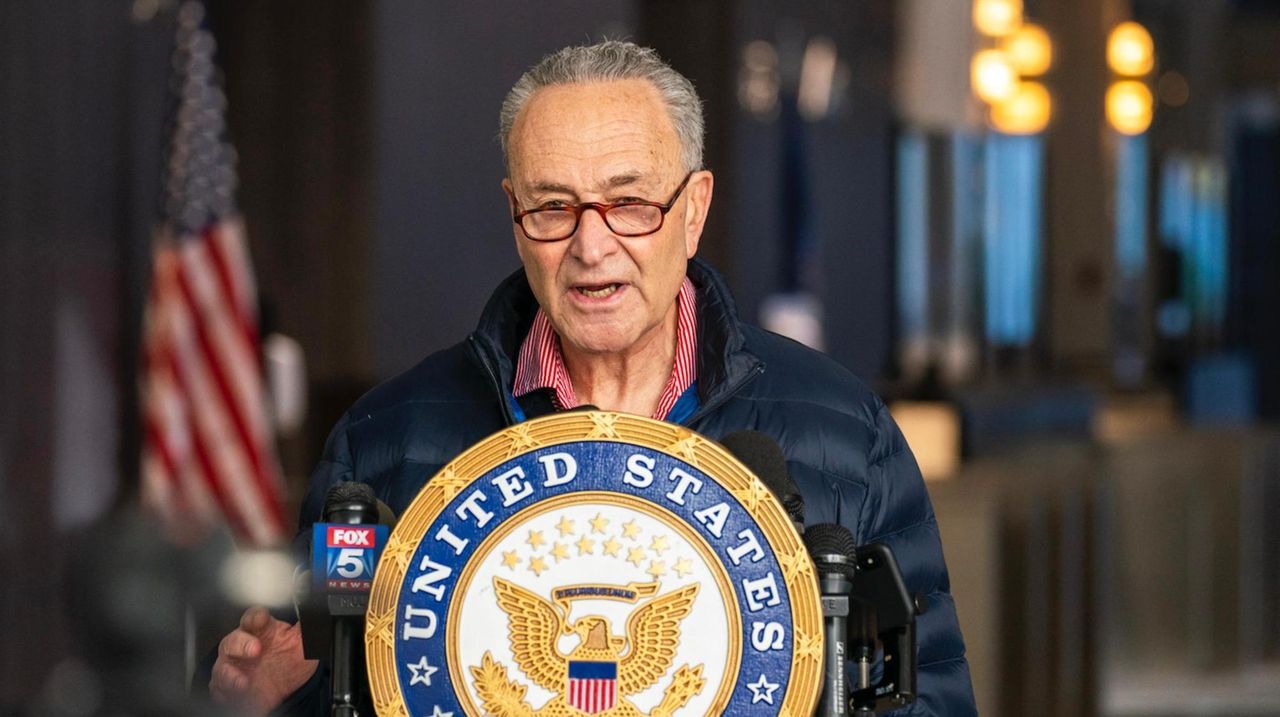 Sen. Chuck Schumer (D-N.Y.) spoke in Manhattan on Sunday about plans for the next three weeks, which include proceeding with an impeachment trial of former President Donald Trump, confirming President Joe Biden's Cabinet appointees and approving a COVID-19 relief bill. Credit: Corey Sipkin

WASHINGTON — Sen. Chuck Schumer became Senate majority leader on Wednesday, reaching the pinnacle of his political career, but it’s not exactly how he envisioned he would reach that peak or the many challenges that would confront him.

In his first floor speech as Senate majority leader — following the mostly virtual inauguration of President Joe Biden during a pandemic and protected by tanks and troops from another feared deadly insurrection — Schumer exhaled a deep breath and grinned.

"I need to catch my breath, so much is happening," Schumer said.

From the moment the Brooklyn Democrat realized he would lead the Senate after the improbable runoff victories by both Georgia Democratic Senate candidates on Jan. 5, he has faced test after test of his skills as a leader, a strategist and a negotiator.

He's been locked in talks with Senate Minority Leader Mitch McConnell (R-Ky.) over how the two parties, each with 50 senators, will share power and whether to protect the legislative filibuster. He’s just begun winning approval for Biden’s nominees while an impeachment trial lies ahead.

And in the next two years before he is up for reelection, he will be confronted by more challenges, notably his need to advance Biden’s ambitious agenda, which includes a $1.9 trillion relief and stimulus package, a massive infrastructure bill and a sweeping immigration overhaul.

"It's a tremendous responsibility but a tremendous opportunity, really," Schumer said in a phone interview Thursday. "I'm ready to move forward."

At age 70, Schumer has been an elected official since he was 23, and over the years he has climbed his way up the ranks from the New York State Assembly to the U.S. House in 1980 and finally to the U.S. Senate in 1998, earning praise and criticism along the way.

He would not be in his position now if in 2015 then-Senate Democratic leader Harry Reid of Nevada hadn’t surprisingly tapped Schumer to be his successor, leapfrogging him over Sen. Richard Durbin (D-Ill.), who conceded Schumer had just outworked him for the job.

That set up Schumer to become majority leader after the 2016 election, but the tide that swept Donald Trump into the White House also washed out a chance for a Democratic majority, until this year.

Schumer as minority leader largely kept his caucus unified on key votes, despite its spread from center to left, and he said he believes he will be able to do that now even though it will be harder because he can’t afford to lose one vote.

"We have a leadership team that meets every Monday night with our two most liberal members, Elizabeth Warren and Bernie Sanders, and our two most conservative members, Joe Manchin and Mark Warner, and then people in between," he said.

"We discuss things and realize that coming together in a unified position is the best way we can help people. And it succeeds," Schumer said. "We're going to continue to do that."

Schumer said the caucus has his back as he battles with McConnell over an agreement on the new Senate’s organization.

"It’s probably sooner than he expected, but this is a key test of Schumer’s leadership," said Jim Manley, a former top aide to Reid.

McConnell has demanded that the agreement include protection for the filibuster, which requires 60 votes to end and would require Schumer to round up nine Republicans to add to the 50 caucus votes and Vice President Kamala Harris’ tiebreaker.

Though Manchin of West Virginia said the filibuster should be preserved, Schumer said, his caucus is united in keeping the possibility to weaken or end it. "We're not going to go along with McConnell's demand that we take it off the table," Schumer said.

And Schumer said caucus members are ready to use reconciliation, a complicated budget-related parliamentary procedure, to pass legislation if Republicans block it.

"When and where we can, we're going to try to be bipartisan because that's how the Senate works best. But we will not forsake our goals for big, bold legislation," Schumer said. If necessary, he said, "we will use it and that will only require 51 votes."

But Schumer and McConnell on Friday did reach agreement on McConnell's request to give two weeks to Trump attorneys to prepare for an impeachment trial, now set to start Feb. 8, and to allow votes to continue on Biden's nominees in the meantime.

Along with the cracks of disagreement within the Democratic caucus comes pressure from outside allied groups, many of them further to the left, to pass sweeping legislation that fundamentally changes the way government works.

One bill many will watch closely for Schumer’s handling is the immigration legislation the White House announced on Wednesday, which progressive activists call impressive but Republicans and conservative groups decry as a non-starter.

Lorella Praeli, president of Community Change Action, a national activist movement, said she expects Schumer will step up on this bill because he always worked on immigration, as he did in 2013 when a bipartisan Senate vote passed a major overhaul.

Schumer will be joined in the partisan negotiations, stand offs and successes by two key partners — House Speaker Nancy Pelosi (D-Calif.), who battled together against Trump, and Biden, a longtime colleague.

Schumer worked with Biden on the major 1994 crime bill and the violence against women legislation in the 1990s and served with Biden on the Senate Judiciary Committee for 10 years before Biden became vice president in 2009. Even then, they stayed in touch.

"I talked to him two or three times a week. Now, I think we’ll both agree that we’ve got to help working families and average middle-class folks, we’ve got to heal the divisions in America, and that we need bold acts given the extent of this crisis," he said.

Despite disagreements and fights to come, McConnell on Thursday congratulated Schumer for his "historic milestone" in becoming Senate majority leader.

"His pride and emotion were palpable yesterday as this self-described ‘kid from Brooklyn [and] son of an exterminator and a housewife’ became the first Jewish member of Congress to lead either chamber," McConnell said.

Schumer acknowledged he choked up Wednesday on his first day as leader on the "awesome, in the Biblical sense, responsibility" he now has.

"I got a little emotional on the floor of the Senate because it's such a heavy-duty responsibility, but it was amazing," Schumer said. "This is not the path we thought we'd get there but we got there. And here we are."