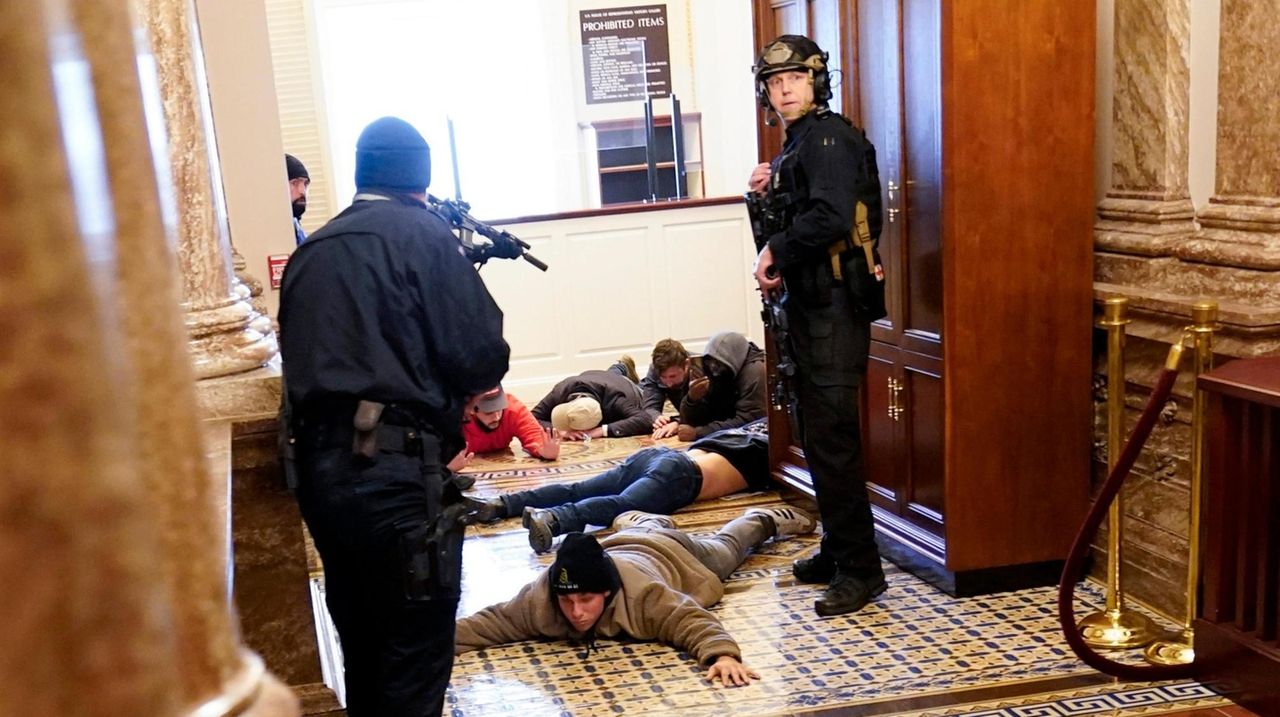 WASHINGTON — As President Donald Trump’s supporters breached security and entered the U.S. Capitol Building on Wednesday, Rep. Tom Suozzi said lawmakers who were assembled in the House chamber were soon told to take cover on the floor.

"There was a standoff at the door, we were told to evacuate," Suozzi said in a phone interview shortly after being evacuated to an undisclosed "safe" area away from the historic chamber.

Suozzi described a scene of mayhem. As lawmakers were shuttled out by Capitol Police, they could hear protesters banging on doors nearby and saw some protesters already detained by police lying on the floor.

As the country was thrust into an unprecedented crisis on Wednesday, and law enforcement struggled to maintain control of an unruly crowd of protesters, Suozzi said Congress should insist on certifying Joe Biden’s Electoral College victory as was initially slated to occur.

For weeks, Trump has been urging congressional Republicans to decertify the election results, and called on his supporters to descend on the nation’s capital for the certification vote.

"I feel very strongly that we have to get back to chambers," Suozzi said. "We have to certify this election."

Inside the chamber, lawmakers were instructed to hold on to gas masks that are normally placed inside the chamber for emergencies, Suozzi said, noting that there were reports of tear gas being used in the marble corridors of the Capitol.

Rep. Lee Zeldin (R-Shirley), who signed the objection to Arizona’s electoral slate, was in the House chamber where he planned to speak in favor of it when Trump supporters burst into the room and House leaders called a recess and began to clear the room.

Zeldin was safely evacuated and later condemned the violence of the protesters, saying in a statement that "there must be ZERO tolerance for violence in any form" and urging everyone to cooperate with Capitol Police.

"This should never be the scene at the US Capitol. This is not the America we all love," Zeldin said in a statement.

"We can debate and we can disagree, even on a January 6th following a Presidential election," Zeldin said. "But in our republic we elect people to represent us to voice our objections in the House and Senate on this day."

Earlier in the day, Zeldin announced his decision to sign on to the objections to the election certification on Twitter shortly before Congress was scheduled to meet to certify states’ electoral votes that gave Joe Biden 306 votes to Trump's 232.

"To all my fellow Americans on the left, in the center & on the right, it’s time for us to have one big family talk in the Capitol & beyond. I just signed off on objections to make sure this conversation takes place TODAY. If not now, when?" Zeldin tweeted.

After the Capitol complex was secured on Wednesday evening and Congress reconvened, Zeldin tweeted that he would continue to raise his objections to Arizona's electoral college results. "This debate is necessary," he wrote.

The initial debates in both the House and Senate chambers were abruptly cut short as a crush of Trump supporters, many wielding Trump 2020 flags, stormed the Capitol steps and made their way into the building, prompting the Capitol Police to evacuate Vice President Mike Pence from the grounds. Police issued an alert to lawmakers on their phones advising them: "Move inside office/lock doors, seek cover and remain silent."

From the Capitol, Rep. Kathleen Rice (D-Garden City) tweeted shortly after 4 p.m.: "For those asking, my staff and I are safe. Thank you."

Rice's spokesman Stuart Malec, in a phone interview, said he has spoken with Rice and she had been evacuated to a "safe location" but citing safety concerns he said he couldn't disclose more information.

Rep. Andrew Garbarino (R-Bayport), who was just sworn into office on Sunday, reported that he was safe.

"I am safe and so is my staff," Garbarino tweeted. "Resorting to violence and disobeying law enforcement is never the answer, no matter which side of the aisle you are on. This is un-American. We are a country of law and order. I'm praying for the soul of our nation."

Garbarino called the riot "un-American" and "insane" and the kind of thing that "happens in third-world countries."

He said he agreed with Wisconsin Rep. Mike Walker, who said the problem stemmed from Trump supporters erroneously claiming Congress could overturn the election results.

"He’s right. That’s the problem. I’m still getting emails saying ‘stick with the President. We can still win.’ I say, what do you mean? We can’t win," Garbarino said.

Rep. Gregory Meeks (D-St. Albans), the newly appointed chairman of the House Foreign Affairs Committee, wrote on Twitter: "The world is watching as the greatest democracy braces against an attempted coup, stirred by its leader who'd rather watch the country burn than transition power."

"We are calling on President Trump to demand that all protestors leave the U.S. Capitol and Capitol Grounds immediately."

Trump, in video posted on Twitter, told his supporters to "go home," but continued to issue his incendiary claim that the election he lost by 7 million votes and 74 electoral votes was "stolen."

Sen. Kirsten Gillibrand (D-N.Y.) in a tweet said she and her staff were "in a secure location" and safe.

Gillibrand wrote: "Today's events are disgraceful but will not change the fact that Joe Biden will be the President of the United States on January 20."