WASHINGTON — The White House on Thursday said President Donald Trump had done "nothing wrong," a day after his former attorney Michael Cohen said Trump had directed him to make hush money payments to two women with the express purpose of "influencing the election."

White House spokeswoman Sarah Huckabee Sanders told reporters the president has "done nothing wrong" and stressed, "There are no charges against him."

She also called it "a ridiculous accusation" to suggest the president lied when he said he didn't know about the payments at the time they were made.

Asked whether Trump was concerned about what Cohen might tell the special counsel investigating alleged Russia election meddling, Sanders replied: "I don't think the president is concerned at all." 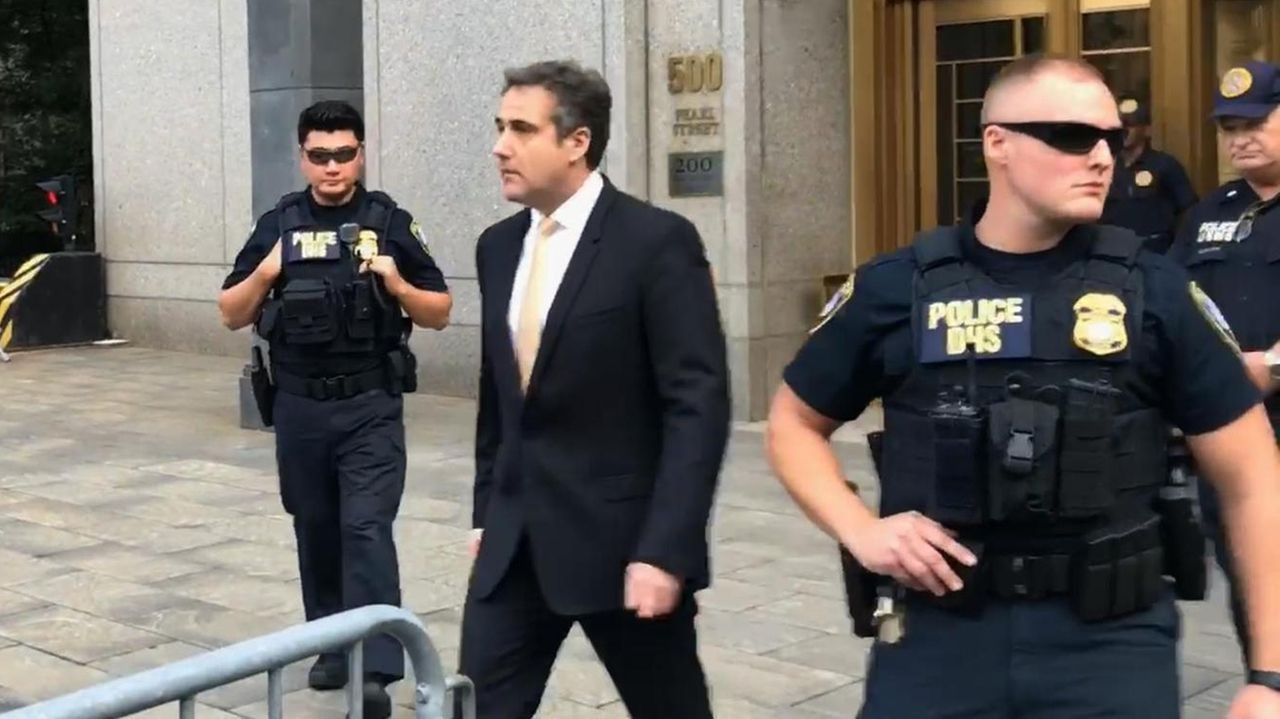 Sanders' defense of Trump came a day after Cohen, who grew up in Lawrence, pleaded guilty to violating campaign finance laws by arranging payments to two women for their silence about alleged affairs with Trump in the critical weeks before the 2016 election.

The Cohen and Manafort cases stemed from Mueller’s Russia probe.

Trump made his first comments about Cohen's plea deal on Wednesday.

"If anyone is looking for a good lawyer, I would strongly suggest that you don’t retain the services of Michael Cohen!" Trump tweeted.

But Trump praised Manafort, calling him “a brave man.

Trump tweeted, “I feel very badly for Paul Manafort and his wonderful family." He said, "Justice’ took a 12 year old tax case, among other things, applied tremendous pressure on him and, unlike Michael Cohen, he refused to ‘break’ — make up stories in order to get a “deal.” Such respect for a brave man!”

Cohen told reporters earlier this year that Trump was unaware of the payments to former adult film star Stormy Daniels and Playboy model Karen McDougal, and that he acted without consulting Trump.

But Trump in May acknowledged to reporters that he reimbursed Cohen $130,000 for payments made to Daniels, while denying he ever had an affair. Trump and Cohen can also be heard discussing a $150,000 payment to McDougal in an audio tape captured by Cohen at Trump Tower that was leaked to CNN last month.

Trump and his legal team maintained that the nondisclosure deals with Daniels and McDougal were not tied to the campaign. But Cohen in court on Tuesday said the payouts were arranged at the direction of the "candidate"  to aid his election bid.

The president, on Twitter, argued that the two campaign-finance-related charges against Cohen “are not a crime” and argued that former President Barack Obama had campaign finance violations that were “easily settled!”

Trump was referring to a 2013 decision by the Federal Election Commission to levy $375,000 in fines against Obama’s 2008 campaign operation, after the FEC determined the campaign missed certain deadlines to report donations over $1,000 in the final days of the election campaign.

But Cohen's attorney Lanny Davis said on CNN Wednesday night that Trump displayed an “incorrect understanding of the law” relating to the payment to Daniels when he told a Fox News interviewer such a payment would not be illegal if it didn’t come from campaign funds.

“What the prosecutors found was the money was paid two weeks from the election, motivated by a fear and a threat from Ms. Daniels that she was going to go public right before the election,” Davis said in an interview with Wolf Blitzer.

“So the finding of the prosecutor, subject to a jury and a trial, is that the motivation as a principal political purpose made that donation illegal and a felony," Davis said. "And if it’s a felony for Michael Cohen, my client, who pled guilty, it’s certainly a felony for the man who, according to the prosecutors, directed and coordinated the payment.”

Davis also said Cohen had information that could be useful to Mueller, who has been probing possible links between Trump’s campaign and Russian operatives to influence the outcome of the 2016 election.

“I believe that he observed and saw Mr. Trump being aware of the use of emails to damage Hillary Clinton’s campaign that could only have been derived from illegal hacking through a Russian agency called WikiLeaks,” Davis said.

“I believe that there is some information that Mr. Cohen could provide to Mr. Mueller that would be of interest to Mr. Mueller," said Davis. "I don’t know if it’s a smoking gun or how decisive it is but I am suggesting is that Mr. Cohen was an observer and was a witness to Mr. Trump’s awareness of those emails before they were dropped, and it would pertain to the hacking of the email accounts.”

With Zachary R. Dowdy and The Associated Press