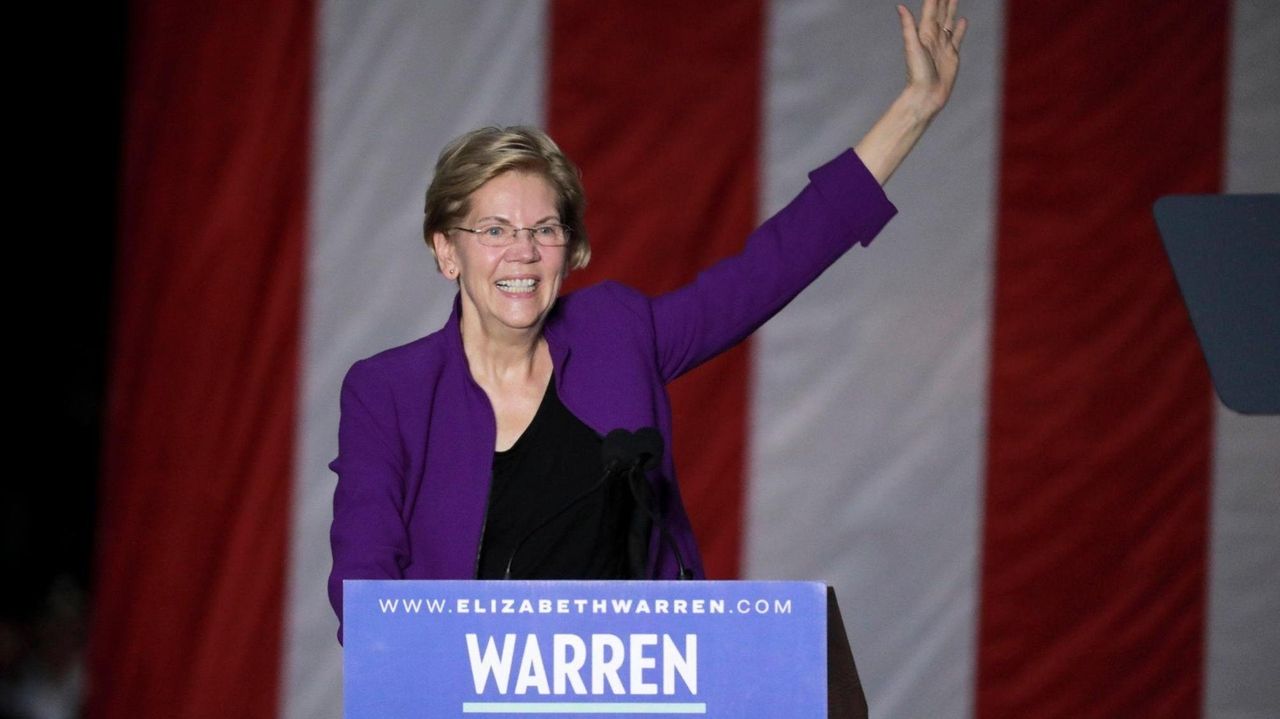 Democratic presidential candidate Sen. Elizabeth Warren, at a rally Monday night in Washington Square Park, detailed how she would combat corruption in government if elected to the White House. Credit: Newsday / Yeong-Ung Yang

Democratic presidential candidate Sen. Elizabeth Warren, at a rally Monday night in Greenwich Village, detailed how she would combat corruption in government if elected to the White House.

“We must root it out and return our democracy to the people,” the Massachusetts Democrat said from under the ornate marble arch of Washington Square Park. “And, yes, I’ve got a plan for that.”

Her signature “plan” line — a nod to her comprehensive policy proposals — drew cheers from the thousands of supporters who packed the plaza with signs reading, “I’m a Warren Democrat.”

Warren reinforced her call for “big, structural change,” a push for revolutionary policies over the incremental approach championed by centrists in the race including the front-runner, former Vice President Joe Biden.

Her campaign said her anti-corruption initiative, modeled on a bill she championed last year, is central to her bid for president.

Warren, Biden and Sen. Bernie Sanders of Vermont make up the three highest-polling candidates seeking the Democratic nomination. She spoke in New York City on the same day she earned the endorsement of the progressive Working Families Party, which in 2016 had backed Sanders.

At the rally, she ticked through the ways she sought to “end lobbying as we know it” and curb the corrupting influence of money in Washington, D.C.

“Let’s start with the obvious. Donald Trump is corruption in the flesh,” Warren said, asking her backers to acknowledge, however, that influence-peddling was a problem before the Republican president’s election. Trump, who himself campaigned on a pledge to “drain the swamp,” has called Warren “nasty” and also labeled her “Pocahontas,” ridiculing her claim of Native-American ancestry.

She said she seeks a lifetime ban on politicians working as lobbyists after they leave office and an end to the hiring of corporate lobbyists for federal government positions. She also seeks to make meetings between lobbyists and elected officials a matter of public record and to ban campaign contributions and contribution-bundling by lobbyists.

“We’re going to take down the ‘for sale’ signs hanging outside every federal building in Washington,” Warren said.

Warren, 70, of Massachusetts, spoke at a park known historically as the gathering place for demonstrators, including those marching for workers’ rights and women’s suffrage.

Her rally was held near the site of the 1911 Triangle Shirtwaist Factory Fire that killed 145 laborers, including immigrant women. She lauded Frances Perkins, who witnessed the fire and went on to lead organizing efforts for safer working conditions. She would become the first woman appointed to the U.S. Cabinet.

Warren, whose campaign launched in February amid criticism over the Native American ancestry issue, has climbed steadily in public polls as other candidates experience plateaus, dips or only momentary spikes in their support.

Warren earlier Monday unveiled online the sweeping anti-corruption proposal that she said would be the first major piece of legislation she would seek to get passed. Her plan laid out nearly 100 ways to address corruption, including “fixing the criminal laws to hold corrupt politicians to account, and ensuring our federal agencies and courts are free from corrupting influences.”

Andrew Eliot Jacobs, 34, of Smithtown, who took the Long Island Rail Road to be at Warren’s rally, said he had wanted her to run for president in 2016. He had supported Sanders in that Democratic primary election and then Hillary Clinton under the Working Families Party line in the general election.

“Senator Warren is better at selling the progressive ideas than Senator Sanders,” Jacobs said. “Her research and her policy team make pipe-dream ideas into reality.”

WFP endorses Warren this time, not SandersThe impact is limited, however, because the party has chapters in only 14 states.