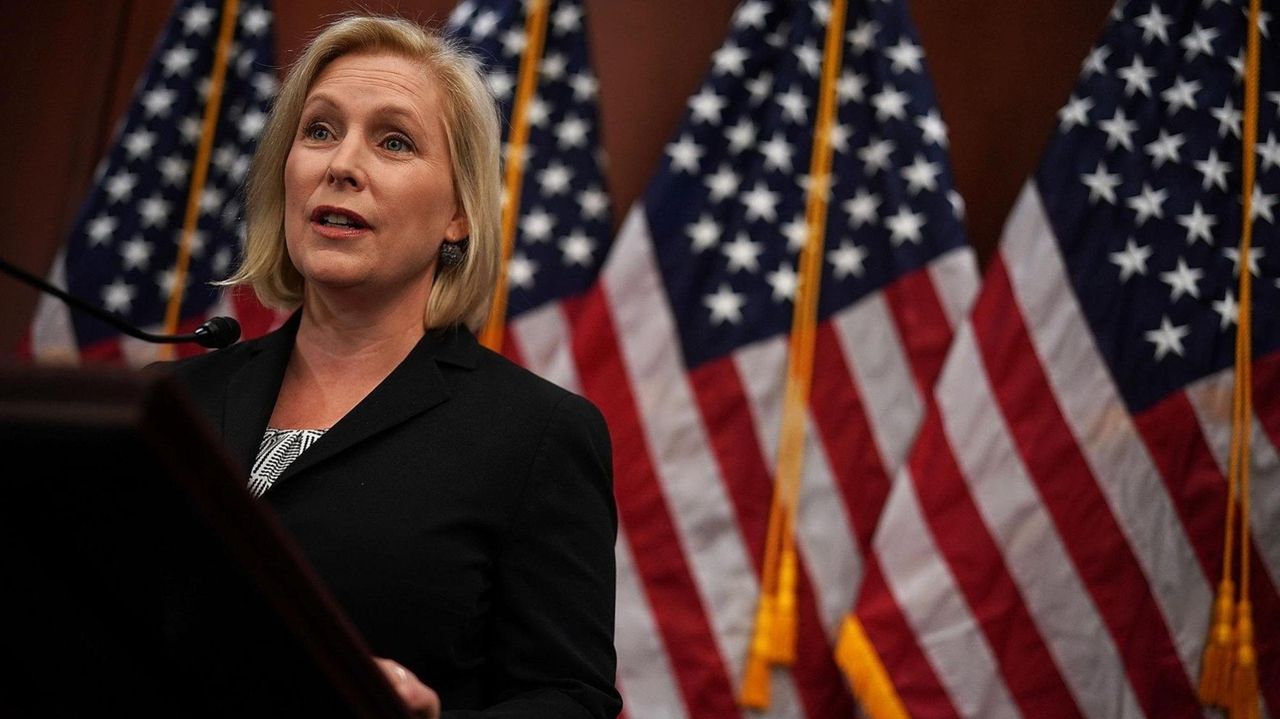 Sen. Kirsten Gillibrand (D-N.Y.) said after a debate in Manhattan Thursday that she’ll serve her six-year term if re-elected, making the remark amid speculation that she’ll run for president in 2020. Her opponent, Republican nominee Chele Farley, predicted Gillibrand will have a change of heart. Credit: Newsday / Emily Ngo

Sen. Kirsten Gillibrand pledged Thursday to serve out her full U.S. Senate term if re-elected, responding to a debate question that was a nod to the floating of her name as a potential 2020 challenger to President Donald Trump.

“I will serve my six-year term,” Gillibrand said during her first and only debate against Chele Farley, the Republican mounting a long shot bid to unseat New York's junior senator.

“I don’t believe that, considering the fact that this is the third day she’s been in New York in the entire month of October," Farley countered. "She’s been in five other states, including New Hampshire, this month.”

Gillibrand and Farley faced off at the WABC-TV studios in Manhattan. The 30-minute debate that is set to air statewide Sunday at 11 a.m. on “Up Close with Bill Ritter.”

Gillibrand, 51, of Brunswick, appointed to the Senate in 2009 and now seeking her second full term, has been far outpolling and outraising Farley, 51, of Manhattan, a former financier and New York GOP fundraiser. A Quinnipiac Poll released earlier this month showed Gillibrand ahead among likely voters by 25 percentage points. Federal Election Commission filings showed that, as of Sept. 30, she had $10.5 million more cash in hand than Farley.

Gillibrand on Thursday called Trump “divisive” and accused him of putting “hate into the climate.” Trump has praised Farley and her bid against the senator.

But Gillibrand also was forced to defend herself against Farley’s criticisms that she has put her ambitions for higher office over New Yorkers' interests.

“I still want to serve this state because there’s so much work left to be done,” Gillibrand said, ticking off national paid leave, better workforce training, stronger health care provisions and getting “the money out of politics” as among her priorities.

Farley attacked Gillibrand on her call to abolish ICE, the U.S. Immigration and Customs Enforcement agency, at a time when the immigrant members of the MS-13 street gang are threatening communities and a migrant caravan is making its way toward the United States from Central America.

“People are calling it a caravan; I call it an invasion,” Farley said. “We can’t allow open borders. We don’t know who’s coming across our border.”

Gillibrand responded that she believes immigration is one of the country’s greatest strengths.

“They should be allowed to have asylum claims be reviewed by judges who are not beholden to the attorney general,” she said of those in the caravan. “They should be processed properly in a humane way.”

Farley then pressed Gillibrand on how she proposes to finance her Medicare for All push. Farley put the projected cost at $32 trillion over 10 years.

“The amount of money that people spend today on health care is more than that amount you cited,” Gillibrand responded, adding that insurance companies should be taken out of the equation because “money should be going directly to health care.”

Farley, who seeks an increased cap on state and local tax deductions as well as an itemized tax deduction on monthly rent, called the GOP tax code overhaul a "bad deal for so many New Yorkers." She said she would have done better.

"I negotiate for a living, and that's what I will do," Farley said.