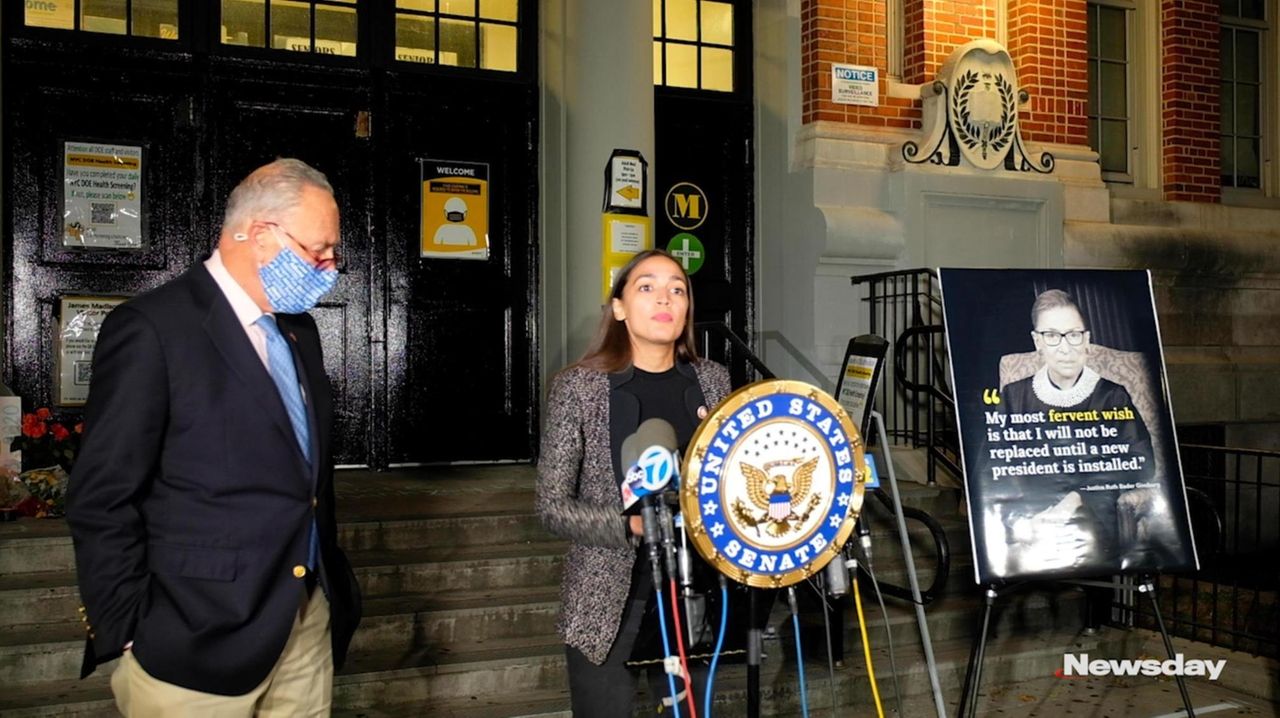 WASHINGTON — Republicans and Democrats on Sunday previewed the fierce political battle shaping up to replace the late Supreme Court Justice Ruth Bader Ginsburg, as Republicans vowed to press ahead with a vote on President Donald Trump’s selection and Democrats pledged to fight a vote before the presidential election is decided.

Senate Minority Leader Chuck Schumer (D-N.Y.) and Rep. Alexandria Ocasio-Cortez (D-Bronx), in a joint news conference held at Ginsburg's Brooklyn high school alma mater, said Democrats were united in their effort to keep a nominee from being confirmed before the election. They called on Democratic voters to mobilize and call GOP senators to urge them against a vote before the outcome of the election is decided.

"We are here to protect voting rights and the civil rights of so many people and people have of color. We are here because the American people want those rights preserved, " Schumer said.

Ocasio-Cortez added: "We need to make sure that we mobilize on an unprecedented scale to ensure that this vacancy is reserved for the next president."

"We must act in unprecedented ways to make sure that our rights are stabilized," Ocasio-Cortez said. "To [Senate Majority Leader] Mitch McConnell we need to tell him that he is playing with fire."

Their remarks came hours after congressional Republicans and Democrats drew their battle lines on the Sunday political talk show circuit.

"We will move forward without delay," said Sen. Tom Cotton (R-Ark.) on "Fox News Sunday." Cotton is one of more than two-dozen Republicans Trump has named as potential Supreme Court nominees.

House Speaker Nancy Pelosi, asked if House Democrats would look to delay a vote this year by opening impeachment proceedings into Trump or Attorney General Bill Barr, told ABC's "This Week": "We have arrows in our quiver that I’m not about to discuss right now."

Trump on Saturday told reporters within the next week he expects to name a nominee to replace Ginsburg, the longtime liberal justice who died on Friday at 87.

Speaking at a campaign rally in Fayetteville, North Carolina, on Saturday night, Trump told supporters his yet to be named choice will be a woman.

Amy Coney Barrett, a federal appellate court judge and abortion rights opponent from Indiana, and Barbara Lagoa, a federal circuit court judge and a Cuban American from Florida, have both been floated as possible nominees, with Trump telling reporters on Saturday both are "highly respected."

The push to fill Ginsburg's seat comes with six weeks left until the election and as some states have already commenced early voting in the race between Trump and former Democratic Vice President Joe Biden.

Biden, delivering a campaign address in Philadelphia, argued the Senate should not act on the nominee until the election results are known because the "voters of this country should be heard."

"This appointment isn't about the past, it's about the future," Biden said.

Democrats making the rounds of the Sunday political talk shows called on Senate Majority Leader Mitch McConnell (R-Ky.), to abide by the precedent he set in 2016, when he blocked President Barack Obama’s nomination of Merrick Garland nine months before the 2016 presidential election, following the February death of conservative Justice Antonin Scalia.

McConnell at the time argued that the choice for the Supreme Court should be decided by voters via their vote for president, but has since reversed course on that standard with the election weeks away.

Former President Bill Clinton, who nominated Ginsburg to the nation’s highest bench in 1993, called McConnell’s move "hypocritical" in an interview with CNN’s "State of the Union."

"You can't keep a democracy if there's one set of rules for one group and another set for everybody else," Clinton said.

Marc Short, the chief of staff to Vice President Mike Pence, appearing shortly after Clinton on CNN said he rejected "the notion of hypocrisy."

"The American people wanted Donald Trump to be in a position to make these nominations and it’s his obligation to do so," Short said.

Sen. Ted Cruz (R-Texas), who also landed on Trump's prior list of potential Supreme Court nominees told ABC's "This Week" the vote should move forward because voters have repeatedly re-elected a Republican Senate majority in the last three congressional elections.

"A major issue in each of those elections is the American people voted and said, we want constitutionalist judges," Cruz said.

At least two Republican senators — Sens. Lisa Murkowski of Alaska and Susan Collins of Maine — have announced the opposition to scheduling a vote before the election. Republicans, who hold a 53-47 advantage in the chamber can only afford two more defections before Trump's nominee is derailed.

On the Sunday show circuit Ginsburg was remembered as a "force for equality," and a "cultural icon," by those who knew her well.

"She was a force for equality for men, as well as women," Clinton said, adding that "she was highly respected because she bent over backwards to work with the other judges when she could."

Hillary Clinton, appearing on NBC’s "Meet the Press" said she recommended Ginsburg to her husband because of Ginsburg's "groundbreaking litigation, both as a lawyer and a law professor," and "her razor-sharp intellect."

Irin Carmon, who co-authored the best-selling book Notorious RBG, and interviewed Ginsburg on several occasions, said Ginsburg embraced the name -- a play-off the name of the late Brooklyn rapper the Notorious B.I.G. -- because "she enjoyed connecting with younger generations."

"I think it was also about this broader project of helping more people understand what it was that the court was doing," Carmon told CNN’s "State of the Union." "When I think about what it was that young people saw in her and not just young women, but also young men, and not just young people, and people of all generations, it was who she was and it was what she stood for. And what she stood for was more than just middle class white women getting jobs, it was a broad vision of gender equality and reproductive freedo

Trump says he'll announce nominee to replace Ginsburg in coming weekThe president told reporters at the White House, "I would say that a woman would be in first place. Yes, the choice of a woman I would say would certainly be appropriate."