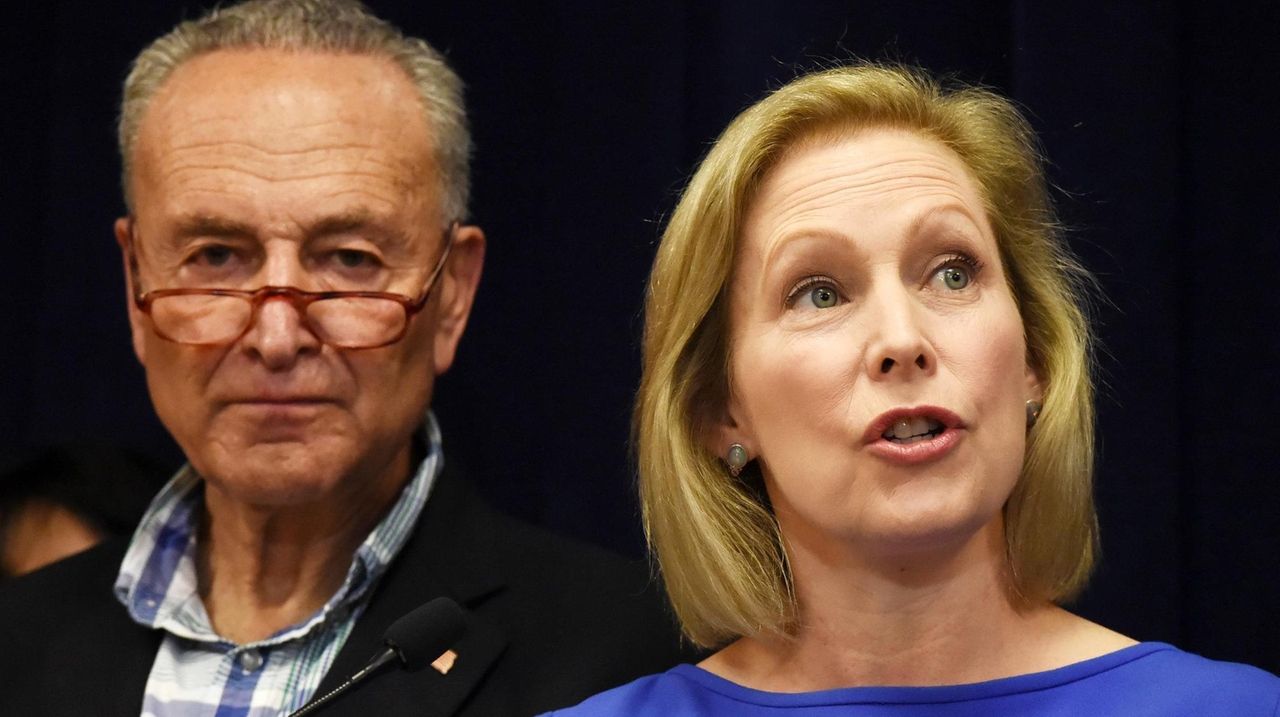 Surrounded by mass shooting survivors and those whose family members were killed by guns, Sens. Chuck Schumer and Kirsten Gillibrand on Sunday said they’d ramp up pressure on Senate Republicans to bring a vote on legislation that would expand background checks.

Robert Gaafar, 35, of Rockville Centre, was a few minutes from leaving a Las Vegas music festival in 2017 when he “heard a couple of pops.” He thought it was fireworks until the sound continued, and he realized it was gunfire, he said at Schumer’s Manhattan news conference.

As he took cover, he felt a “strange pressure” above him, he said — he realized it was the shockwave of bullets passing over him, part of the deadliest mass shooting in recent American history, which killed 58 and wounded hundreds more.

“When you experience gun violence, you see the world differently. I don’t want to live in a country where mass shootings have become as American as apple pie,” he said. “I was angered by the lack of leadership” on gun control, said Gaafar, who was at the festival as part of his job for Anheuser-Busch. He is now a fellow for Everytown for Gun Safety, which advocates for gun control laws.

Schumer, speaking at his Manhattan office, said he and Speaker Nancy Pelosi had spoken to President Donald Trump earlier that morning to ask him to push for a vote on the House-approved bill. But Schumer said he had gotten no commitment from the president.

“It’s the right thing to do, it’s the just thing to do,” as well as politically popular, Schumer said he told Trump.

Gillibrand, who pulled out of her bid for the Democratic presidential nomination late last month, said: “Nothing was done after Sandy Hook, Orlando or Las Vegas or Brownsville or El Paso or Dayton, the list goes on. It doesn’t end and the Senate has shamefully refused to take any action on behalf of families and communities that are so deeply suffering.”

Senate Majority Leader Mitch McConnell’s office on Sunday pointed to comments the Kentucky Republican made last week, in which he called a push by Pelosi and Schumer a “stunt” and said the president had said he’d veto the law.

McConnell has declined to hold a vote on the bill, which was approved by the Democratic-controlled House in February. He said it’s not clear the Senate would be able to pass the legislation or that Trump would sign it into law, according to The Associated Press.

The bill would expand background checks to cover private sales, such as one that allowed a Texas shooting suspect to purchase his weapon before killing seven people last month.

Schumer deflected a question about whether he supports mandatory gun buybacks.

“We’re focusing today on the issue of universal background checks,” he said, before adding that he hadn’t heard of other Democrats who supported that.

Gillibrand said she didn’t believe a mandatory buyback would be necessary because a ban on assault weapons would make it illegal to use them and people would voluntarily sell them back to the government. “You don’t need to start there because it would make people anxious,” she said.