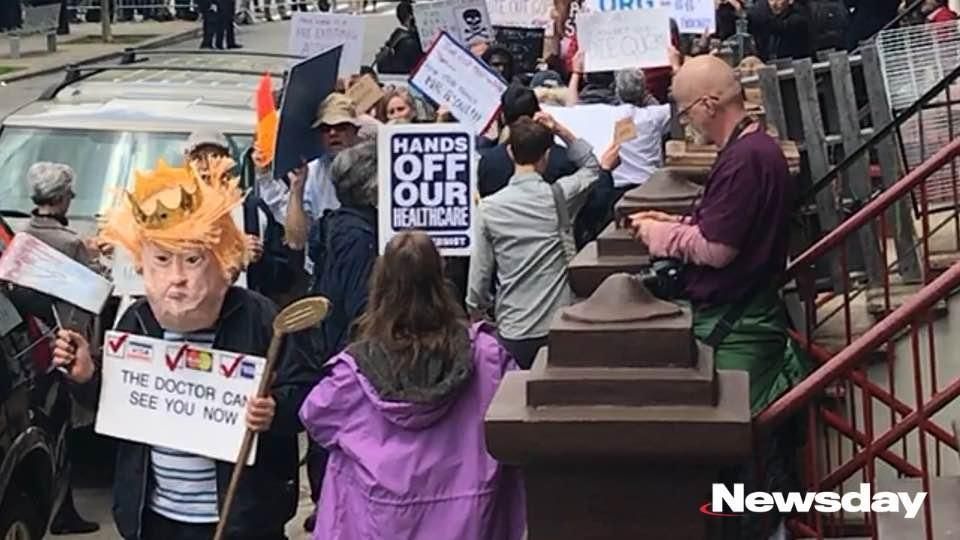 Speaker Paul Ryan toured the Success Academy charter school in Harlem where he was met by protesters on May 9, 2017. (Credit: Newsday / Laura Figueroa)

Ryan (R-Wis.) visited Success Academy 1 charter school — part of a network of charter schools run by Eva Moskowitz, who was once under consideration to serve as President Donald Trump’s education secretary.

His hourlong visit on National Teachers Day also included a brief meeting with special-needs students at P.S. 149, a public school that shares a building with the charter school.

Ryan, in a statement issued after his visit, described the tour as “special.”

“These remarkable kids are getting a great education,” Ryan said. “That’s what matters — giving every kid a fair shot at the American dream.”

The event was closed to media, but Mindy Rosier, a special-education teacher at P.S. 149 told reporters that Ryan spoke with autistic students at her public school.

“The class they went into is an extremely friendly class,” Rosier said when asked to describe how students reacted to Ryan.

Outside there was a less friendly crowd.

More than 100 protesters, including New York City Public Advocate Letitia James, rallied across the street from the school, on West 118th Street. They waved cardboard cutouts of tombstones bearing messages that denounced Ryan’s push to repeal and replace the Affordable Care Act. They chanted “health care for all, not just for Paul.”

Nearly a dozen police officers stood guard outside the school.

Margot Becker, 56, an Upper West Side resident, said she wanted to send the message to Ryan that the GOP and Trump agenda was “not welcome in New York City.”

“We do not want Paul Ryan in our city visiting a school on Malcolm X Boulevard, a school with mostly minority children, to have a photo op,” Becker said.

Moskowitz, in a statement issued after the visit, said she was “pleased to welcome Speaker Ryan,” so that he could “see firsthand what is working,” with the charter school system.

Several big names have visited Success Academy in the past, including Ivanka Trump in November and House Majority Leader Kevin McCarthy (R-Calif.).

Laura Figueroa covers New York City politics and government. She joined Newsday in 2012 after covering state and local politics for The Miami Herald.