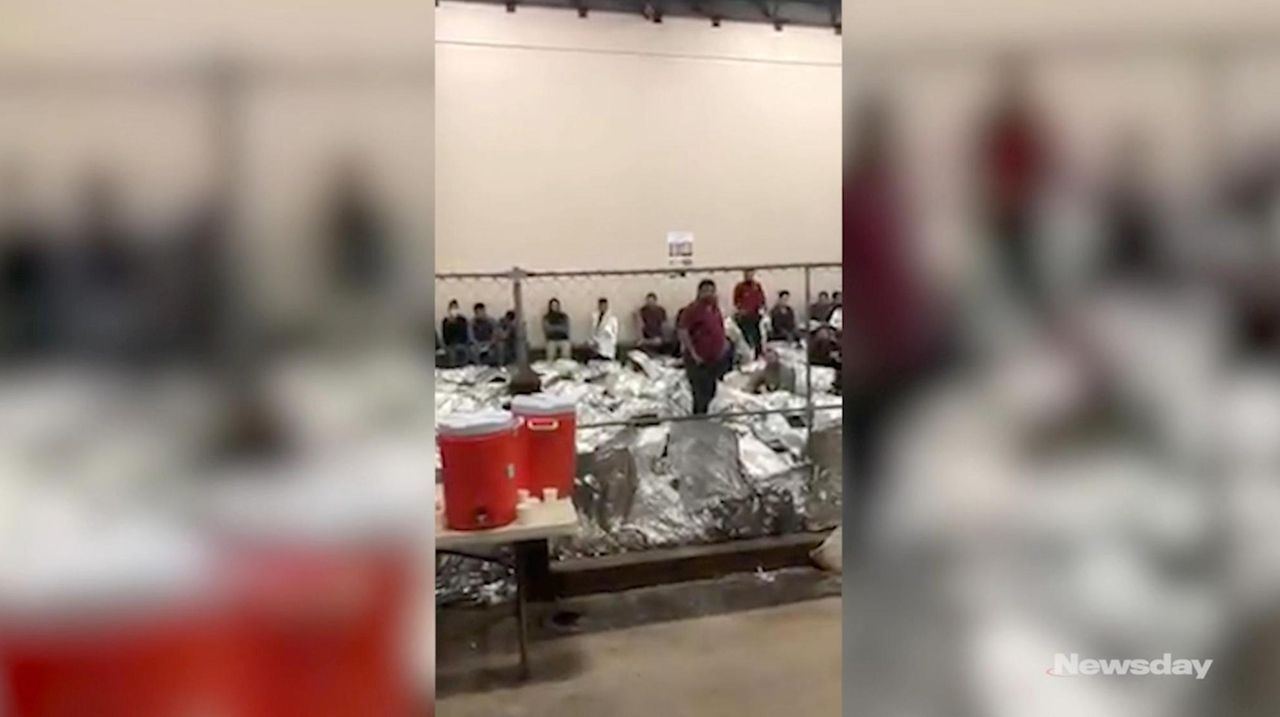 Rep. Tom Suozzi traveled to the U.S. Border Patrol Processing Center in McAllen, Texas, where he filmed a video of the migrant-holding pen while his guide, Chief Patrol Agent Rodolfo Karisch, explained the scene. Credit: Office of Congressman Tom Suozzi

WASHINGTON — Rep. Tom Suozzi said he saw men sleeping on a bare concrete floor and heard children without parents talking, crying and coughing behind chain-link fences in a visit Saturday to two overflowing migrant detention centers on the southwestern border.

Suozzi, the Glen Cove Democrat, said he joined 15 other House Democrats on the trip to McAllen and Brownsville, Texas, with a side visit to Mexico, to see firsthand the U.S. Border Patrol stations that are overwhelmed by an influx of Central American migrants seeking asylum.

“It’s just awful,” Suozzi said in a phone call from Brownsville late Saturday afternoon. “These are below the standards of what we would expect for the United States of America. And the system is all broken.”

Immigration has surged as a national issue, as Democrats clamor for more humane treatment of migrants at the border and President Donald Trump, in his crackdown on illegal immigration, orders raids to begin Sunday to arrest noncitizens with deportation orders.

At an emotional House hearing Friday, Rep. Elijah Cummings (D-Md.) said subpoenaed records showed at least 18 infants or toddlers under age 2 had been taken and kept from their parents for up to six months and 241 children had been detained longer than the 72 hours permitted by law.

Fissures in Congress over what to do about the crisis at the border and the millions of people living in the United States illegally have created partisan battles and even clashes between progressives and moderate Democrats.

Suozzi, a moderate, joined the most recent Democratic congressional delegation making the trip to the border. It came just days after some constituents at his town hall meeting last week complained about his vote for a $4.6 billion emergency funding bill, saying it had too little humanitarian aid.

Suozzi said the trip to Texas and Mexico did not change his mind on the necessity of that vote. “That had to be done,” he said. “They need the resources down here.”

Suozzi and the others in his group went to the processing center at the McAllen Border Patrol Station that Vice President Mike Pence toured on Friday — a visit that prompted Pence to describe the overcrowded holding pen and lack of cots, bedding and, until Thursday, a shower, as “tough stuff.”

Later Saturday afternoon, at the Ursula processing center, also in McAllen, Suozzi took and posted on his Facebook page a video that shows scores of children on green mats, many lying under Mylar blankets, behind chain-link fences.

As the visiting lawmakers, wearing respiratory masks, surveyed the scene, the tour guide, Chief Patrol Agent Rodolfo Karisch, can be heard on the video saying that the fencing allows air flow and provides security.

“It’s not completely ideal,” he said, “but it’s not a lot of the horrible things that you hear about some of our facilities.”

One of the big problems, Suozzi said he was told, is that the border patrol stations were built to process incoming migrants, not to hold them. By law, he said, the patrol must process the migrants within 72 hours, but instead they end up detaining them for weeks and months because the U.S. Immigration and Customs Enforcement facilities have no room to take them.

Later, on a short visit to Mexico at the Brownsville crossing, Suozzi called to say he was surprised to learn that only 20 or 30 migrants seeking asylum are processed each day,  which appears to have aggravated the overcrowding.

“It actually provides an incentive for people to cross in between ports of entry and be apprehended and then turn themselves in to seek asylum,” Suozzi said. That, in turn, lands them in the detention facilities.

Suozzi said he and the other lawmakers on the trip were moved by what they saw. “We’re already talking about what we can do together as a group to try and bring attention to this and pass legislation,” he said.

But any legislation, he said, must fix the humanitarian crisis, ensure border security, deal with the poverty and violence in El Salvador, Guatemala and Honduras that is pushing out the migrants, and address the millions of people living in the United States without legal status.

“And the partisan sniping and the rhetoric from both sides, you know, really, the president mainly, but from both sides, is not contributing towards a reasoned effort to address this problem,” Suozzi said.

“I think only if people's consciences are touched that we will solve this problem,” he said. “This is much bigger than that anybody's individual political agenda.”

Brand: Zimmerman makes 'statement' to SuozziRobert Zimmerman harshly criticized Rep. Tom Suozzi for failing to back efforts to get guarantees in the Senate bill to protect immigrant kids.