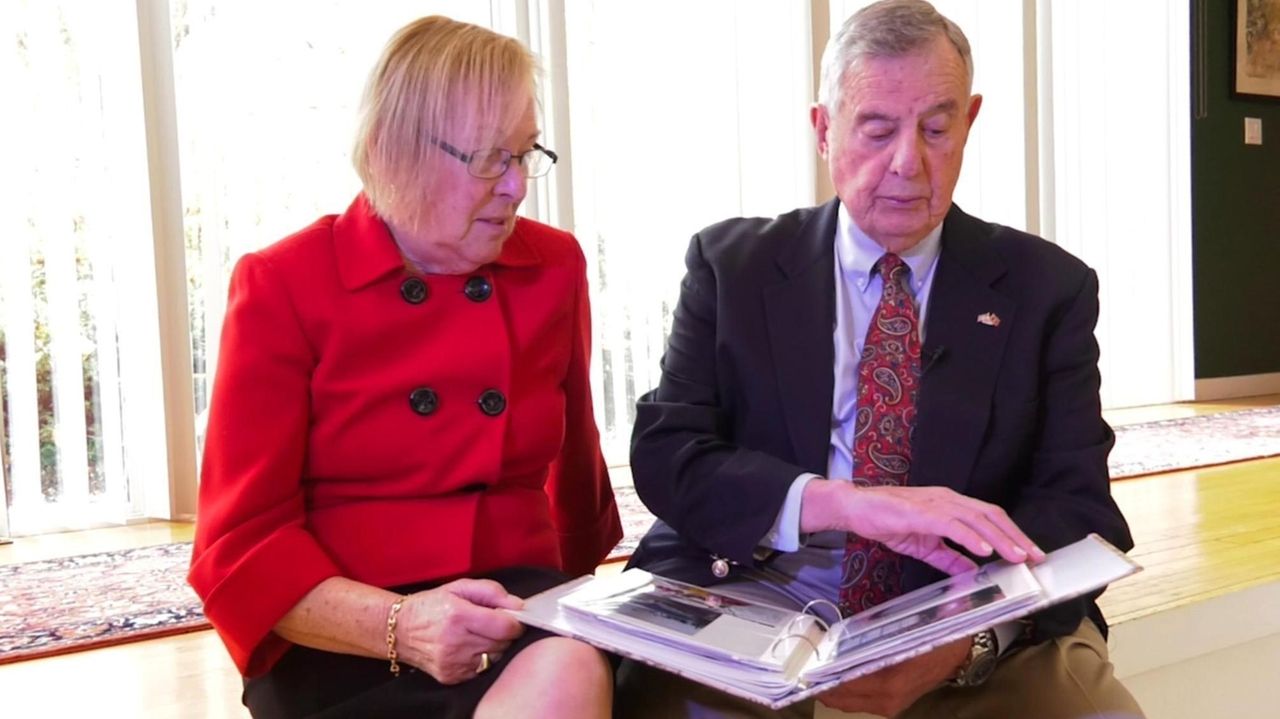 Former Nassau GOP Chairman Joseph Mondello sat down with Newsday to speak about his time as the former appointed U.S. ambassador to Trinidad and Tobago, during Donald Trump's presidency.  Credit: Newsday / John Paraskevas

The pair of Caribbean islands had been deemed by intelligence officials as a primary recruiting ground for the Islamic State terrorist group, and the United States was looking to stop the pipeline.

Thousands of Venezuelan migrants, beset by food shortages and a crumbling economy, arrived and continue to arrive on the shores of the islands seeking refuge.

China and Russia also have been looking to exert their influence over the region, with China spending massively on developing a port in Trinidad and Russia aligning itself with the regime of authoritarian leader Nicolás Maduro of Venezuela, a country whose northern coastal border is mere miles from Trinidad.

All the while, the country’s leaders shared a tense relationship with Mondello, which often played out in the local newspapers.

"There might have been a time when it was a quiet tropical island and a place for fun … but this was not that," Mondello said in an interview with Newsday. "When you've got the country that produces the most ISIS fighters per capita, when you've got a country that's six miles away from Maduro and what he's done in Venezuela, when you are in a country where the Chinese are coming in and building ports and a new embassy, and they're bringing their own people in to do all the work, and when you've got Russia landing planes six miles away [in Venezuela], with troops and everything … it was a hotbed."

Mondello, 83, stepped down shortly before President Joe Biden was sworn into office in January. Even if Trump had won the 2020 presidential election, the grandfather of five said he and his wife, Linda Crabtree Mondello, had always planned to return to their Oyster Bay home after 2½ years of living more than 2,200 miles from Long Island.

"When I first went there, a part of me said, ‘Well, maybe I am going to go to a tropical island and will walk around the beach in my bathing suit,’ " Mondello said. "Not for nothing, that’s not the way it was, and it’s not the way it’s going to be in the future. Not with what’s going on."

From Oyster Bay to Port of Spain

Mondello and his wife arrived in the Trinidadian capital of Port of Spain in October 2018. Three months earlier the U.S. Senate confirmed his nomination with bipartisan support. Former Rep. Pete King (R-Seaford) and Democratic National Committeeman Robert Zimmerman both offered their endorsement of Mondello before the Senate Foreign Affairs Committee.

For 35 years Mondello had served as the head of the powerful Nassau Republican Committee, and he also served a three-year stint as state party chairman in the early 2000s, two roles that saw him play an outsized role in shaping the roster of Republicans running for state, local and federal elections.

"As chairman you’re trying to coordinate the whole political operation and you’re also dealing with a lot of the egos, and trying to keep everyone on the same page, so I think those jobs prepared him for being ambassador," said King, who has known Mondello since the 1970s when both served on the Hempstead Town Board.

In 2016, a month before New York’s Republican presidential primary, Mondello became an early endorser of Trump, giving a boost to the real estate mogul’s insurgent campaign at a time that national Republican Party leaders were fighting to block his path to the party’s nomination.

Trump, who had met Mondello on several occasions before his presidential bid, chose the native New Yorker over moderate Ohio Gov. John Kasich and conservative Sen. Ted Cruz of Texas.

U.S. presidents from both parties have long offered prime ambassador positions to allies and fundraisers, and by the fall of 2018, with his Senate confirmation in hand, Mondello was on his way to representing the United States' interests in one of the Caribbean's wealthiest countries, an oil-producing nation of more than 1.3 million people.

Before heading to Trinidad and Tobago, Mondello, 80 at the time, had to undergo seven weeks of diplomatic crash courses at the State Department’s Washington, D.C., headquarters and with other federal agencies.

Trinidadian news reports at the time of Mondello’s arrival described a warm initial meeting between him and the country’s prime minister, Keith Rowley, a member of the country’s center-left political party.

Eventually the relationship between Mondello and Rowley grew strained, in part over the country’s positions on Venezuela.

Rowley in public statements acknowledged Maduro as Venezuela’s leader, a position at odds with the United States, which recognized opposition leader Juan Guaidó as the country’s leader.

Mondello, on behalf of the Trump administration, also raised concerns to Trinidadian officials after Venezuelan Vice President Delcy Rodríguez visited the country and met with leaders there in March 2020. In a statement issued by the U.S. Embassy, Mondello argued that allowing Rodríguez to visit might have violated a decades-old treaty among the United States and several South American and Caribbean countries that would have prohibited her travel there because of sanctions imposed on her and other Venezuelan leaders by the United States.

Trinidad and Tobago officials defended the visit, arguing that they were discussing the influx of Venezuelan migrants to the island.

One of Trinidad’s daily newspapers — also called Newsday — reported that Rowley and other top officials met with Mondello at the embassy in May 2020 "to soothe troubled relations."

"The United States of America remains an important ally and we continue to have a good working relationship with mutual benefits to our two countries," Trinidad and Tobago’s National Security Minister Stuart Young said in a statement at the time.

"His attitude was very poor toward our country, and so I had a very bad relationship with him … we were kind of fighting all the time," Mondello said.

Asked about Mondello's comments, Trinidad's Ministry of Foreign and CARICOM Affairs issued a one-page statement to Long Island's Newsday, saying his remarks "convey a complete lack of understanding and grave misinterpretation of the normal conduct of affairs between two countries."

"Trinidad and Tobago has a long-standing, very fruitful and productive relationship with the United States, having enjoyed extensive relations with many areas of cooperation and success between the two countries," the memo said.

Anthony Maingot, a professor emeritus of sociology and anthropology at Florida International University, who hails from Trinidad and has studied the country’s politics, said Mondello did "very well" in his position, despite going "mano a mano" with officials.

Ambassador Mondello meets with Trinidad and Tobago's Health Minister Terrence Deyalsingh in early 2019 to discuss initiatives to improve its health sector, including promoting and ensuring the well-being of the Venezuelan migrant population. He visits the Golden Grove prison in 2019. Credit: U.S. Embassy in Trinidad & Tobago

"The years that he was ambassador were years in which there were two specific items on the agenda both for the Trinidad government and for the U.S. — one was addressing the ongoing drug trade … the other was that Trinidad was the largest recruiter per capita of members of ISIS … so those were two significant issues to have to deal with in your first time as an ambassador," Maingot said in a phone interview with Newsday.

Mondello is not the only Long Islander with diplomatic credentials. David M. Friedman, a bankruptcy lawyer who grew up in North Woodmere, served as Trump’s ambassador to Israel for four years.

Businessman and Democratic fundraiser George Tsunis of Matinecock has been nominated by Biden to serve as ambassador to Greece. Tsunis, 53, is still waiting for a Senate panel to schedule his confirmation hearing. He was previously nominated by former President Barack Obama to serve as ambassador to Norway, but Tsunis withdrew his nomination after fumbling questions about the country during his Senate hearing in 2014.

Former Rep. Steve Israel (D-Huntington) was floated as a potential nominee for ambassador to Israel after Biden won the presidency, but the former congressman, who is opening a bookstore in Oyster Bay, withdrew his name from consideration, citing his desire to spend more time with his family on Long Island.

Back on Long Island

Upon returning to Long Island, Mondello rejoined the Garden City law firm of Berkman Henoch, and has been mourning his son Joseph Nestor Mondello, who died on Sept. 21 of an aneurysm, leaving behind a wife and son.

While Mondello remains in touch with Nassau GOP officials, he said it’s largely because of the personal connections he’s made over the years, not to reprise his role as party chairman. That role is now held by Joseph Cairo, who had worked closely with Mondello as a vice chairman of the county committee.

"Thirty five years was enough," Mondello said, noting that on election night, as Nassau Republicans racked up a series of victories, he was invited to a gathering with party leaders, but decided not to attend. "I thought, leave it to the current chair and vice chairs, it’s time to take a back seat."