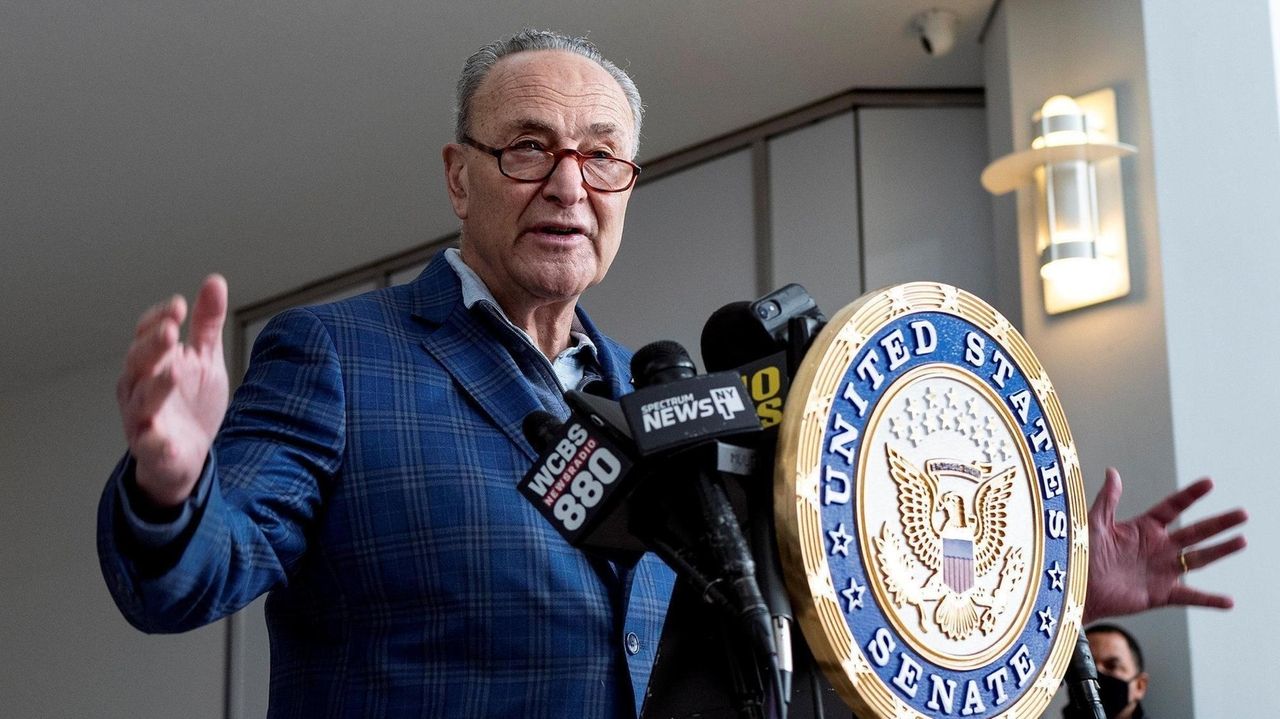 This story was written and reported by Rachelle Blidner, Tom Brune and Jesse Coburn.

Nassau would receive $397.7 million while Suffolk would get $286.38 million, Schumer said. Other Long Island local governments, including towns and villages, and school districts would also receive a cut of the funding, although details were not available Sunday.

"The robust basket of aid that we have been able to put together and pass yesterday will affect just about every aspect of New York life where there has been trouble," Schumer said at a news conference in Manhattan. "I say to beleaguered New Yorkers, help is on the way."

The House will take up the Senate version Tuesday, said House Majority Leader Steny Hoyer (D-Md.). He said he expects the Democratic majority to approve it and send it to the White House for President Joe Biden’s signature this week.

The federal funding could come to Nassau and Suffolk counties after Curran and Bellone spent months advocating for its need.

"The coronavirus continues to have devastating health and economic consequences," Curran said in a statement Sunday. "Nassau County urgently needs this relief to ensure we have the resources to assist our residents and business community."

"The American Rescue Plan returns some of our tax dollars that we send to Washington every year so that we can continue to effectively battle the COVID-19 pandemic and begin the work of recovery over the next several years," Bellone said in a statement.

Expected coronavirus-related revenue losses prompted Nassau to refinance its debt and cut spending in its 2021 budget.

In Suffolk, budget cuts were expected to be much deeper. The 2021 budget includes plans to eliminate 500 full-time jobs, cut law enforcement classes, curtail bus and disability transit services and reduce funding to community clinics, public health agencies and nonprofits. Bellone has said the cuts, expected to take place in July, could be averted with more federal aid.

The relief package as approved by the Senate would provide Nassau with nearly quadruple the funding it received from the CARES Act last year — $103 million — while Suffolk would get about $2 million more than the $284.3 million it got in CARES funding. CARES Act money could be used only for pandemic-related expenses.

Local governments could use the relief package funding for a larger variety of purposes, including assistance to households, small businesses and nonprofits, as well as impacted industries, such as tourism, travel and hospitality, Schumer spokesman Angelo Roefaro said. It could also go toward providing "premium pay" to front line workers and investments in water, sewer and broadband infrastructure.

Hempstead Town was the only town in the nation large enough to receive CARES Act funding. Other Long Island municipalities had to make do without additional federal aid while generally seeing lower revenue and higher costs during the pandemic, including for increased public safety responses, added staff overtime and testing sites, Schaffer said.

The relief package would provide about $825 million in aid to New York's towns, villages and small cities, Schumer's office said.

In total, $23.8 billion would go toward governments in the state, including $6.14 billion for New York City and $12 billion for New York State, Schumer's office said. Overall, New York would get about $100 billion of the $1.9 trillion stimulus package, including aid for workers, restaurants, small businesses and vaccine programs, according to Schumer, who helped shepherd the deal through Congress in his role as Senate majority leader.

Small business owners, restaurateurs and nonprofits would also be able to apply for grant programs worth billions of dollars.

New York would also get hundreds of millions of dollars for critical infrastructure projects, Amtrak and assistance to the homeless.

The Senate did limit some of the more generous House measures.

And in a compromise that delayed the process until late at night, the bonus for unemployment insurance dropped to $300 from $400.

But the two items Republicans targeted the most will have only relatively small impact on New York.

The Senate parliamentarian stripped the bill of a gradual increase of the federal minimum wage hike from $7.25 an hour to $15 an hour, saying that under the rules for budget reconciliation that wage hike did not qualify as budget-related.

But New York’s minimum wage already is $15 an hour in New York City, $14 an hour on Long Island and in Westchester County, and $12.50 in the rest the state — all far above the current federal minimum wage.

What's in it for New Yorkers