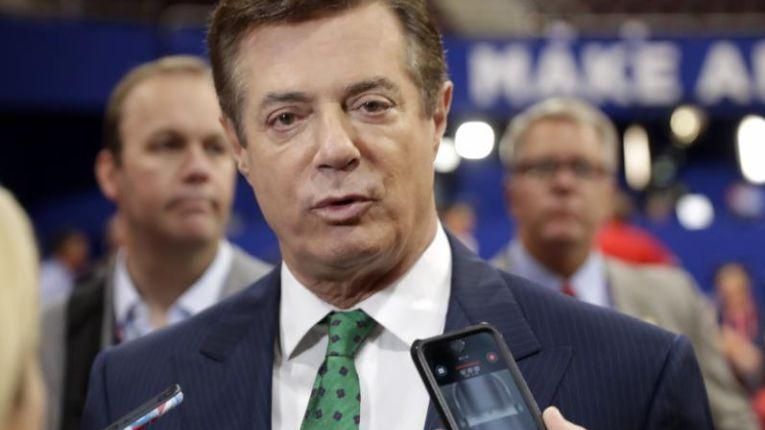 Kevin Downing, attorney to former Trump campaign chairman Paul Manafort, told reporters that President Donald Trump was "correct" in saying there was no collusion between his campaign and the Russian government. He spoke outside the Federal District Court in Washington, D.C. on Monday, Oct. 30, 2017, after Manafort pleaded not guilty to conspiracy against the United States, conspiracy to launder money and other charges by special counsel Robert Mueller. (Credit: Newsday / Emily Ngo)

Manafort’s longtime business associate Rick Gates also was named in the indictment that said the pair laundered millions in revenue from their work as unregistered foreign agents and lied to the Department of Justice about their activities as recently as last February.

Manafort “used his hidden overseas wealth to enjoy a lavish lifestyle in the United States, without paying taxes on that income,” the document alleges.

He spent millions on home improvement and landscaping at businesses in the Hamptons and his sprawling Bridgehampton estate is subject to forfeiture, according to the indictment.

Gates also pleaded not guilty to all charges at federal district court in Washington, D.C.

Both surrendered their passports and were ordered to home confinement. Bond was set at $10 million for Manafort and $5 million for Gates.

The charges against the three men signaled a turning point in Mueller’s monthslong investigation, which includes the examination of Kremlin meddling in the 2016 election and whether President Donald Trump’s campaign played a role.

Mueller was appointed in May and took over the probe begun by then-FBI Director James Comey after Trump abruptly fired Comey.

The president and his aides responded Monday by seeking to underscore that no evidence has been unearthed pointing to collusion between his inner circle and Moscow.

Trump and his campaign are not mentioned in Manafort and Gates’ 31-page indictment.

“Sorry, but this is years ago, before Paul Manafort was part of the Trump campaign. But why aren’t Crooked Hillary & the Dems the focus?????” Trump tweeted.

Still, White House press secretary Sarah Huckabee Sanders sought to minimize Papadopoulos’ role in the campaign as “extremely limited” and noted he was a volunteer.

“It has nothing to do with the activities of the campaign. It has to do with his failure to tell the truth,” she said of his charges.

The president’s tweet that Manafort’s alleged activities took place long before the 2016 campaign clashed with the indictment’s charge that Manafort and Gates conspired to defraud the United States “in or about and between 2006 and 2017.”

Manafort’s attorney, Kevin Downing, told reporters Trump was “correct” in that there was “no evidence” that Manafort, the campaign and Russia colluded.

Gates’ spokesman Glenn Selig said his client welcomes the opportunity to confront the charges in court. “This fight is just beginning,” Selig said.

Manafort, 68, of Alexandria, Virginia, and Gates, 45, of Richmond, Virginia, worked as unregistered agents to the government of Ukraine and the pro-Russia Party of Regions, among other groups, according to Mueller’s office.

They hid the payments from U.S. authorities by laundering the millions through U.S. and foreign corporations, partnerships and bank accounts, including overseas in Cyprus, and Saint Vincent and the Grenadines, the indictment said.

In all, more than $75 million flowed through offshore accounts and Manafort laundered more than $18 million, it said.

Downing called the notion of keeping offshore accounts to bring funds into the United States and conceal them from the U.S. government “ridiculous.”

The indictment alleges opulent tastes on the part of Manafort.

In 2012, he made payments on three Range Rovers and bought a Mercedes Benz, the indictment said.

A summary of the charges encompassed in the 31-page indictment and the potential penalties:

Read the indictmentThe grand jury indictment against Paul Manafort as filed in the U.S. District Court. Feds: Manafort may have to forfeit LI houseManafort's Bridgehampton property would be subject to forfeiture upon conviction, under terms of an indictment. Trump tweets: End Mueller probe, collusion not a crime, moreSee President Trump's latest noteworthy tweets. Latest news: Trump presidencyGet complete coverage of U.S. politics, including the 45th president, his administration and Congress.