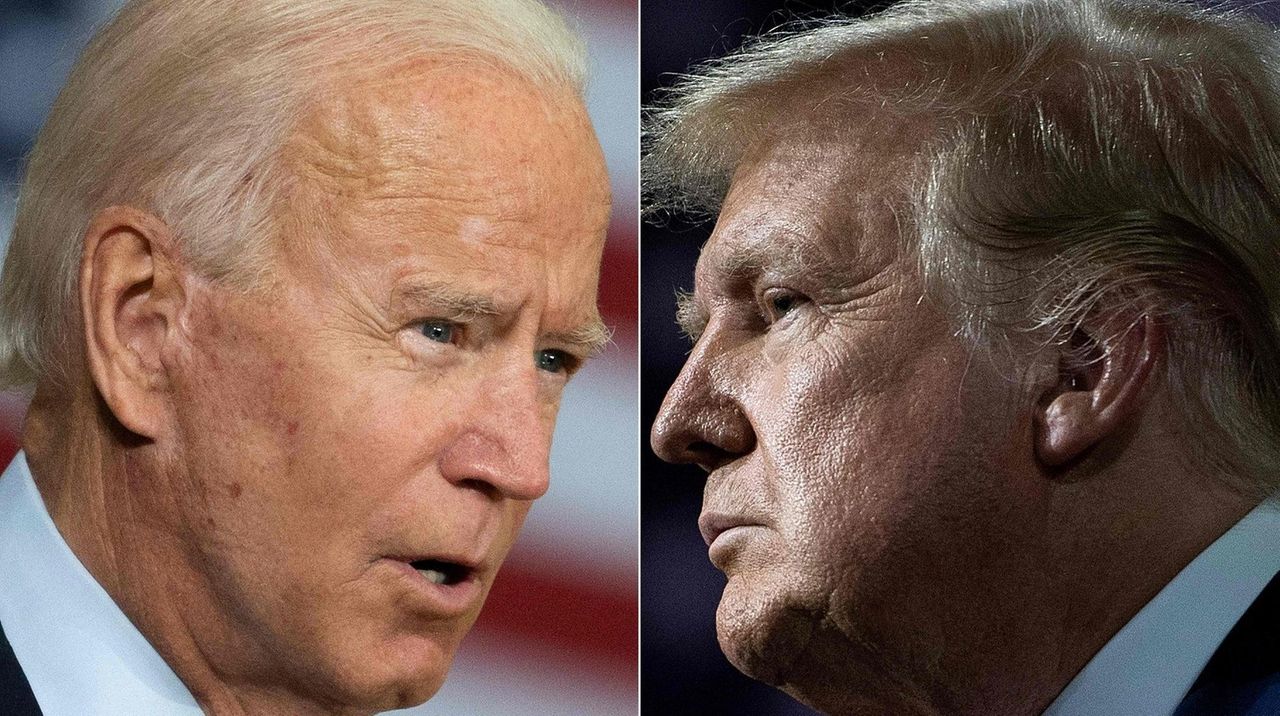 WASHINGTON — President Donald Trump and former Vice President Joe Biden will faceoff Tuesday for the first presidential debate, a showdown that is expected to focus on the makeup of the Supreme Court, the federal response to the coronavirus and the integrity of the election.

In a campaign season defined by the COVID-19 pandemic, Trump and Biden will share a socially distant debate stage with about 80 people in the audience, and skip the customary handshakes, according to the nonpartisan Commission on Presidential Debates, which is organizing the three presidential debates.

Debate moderator Chris Wallace of Fox News last week detailed these possible topics for discussion: The Supreme Court, Trump and Biden’s respective records in office, COVID-19, the economy, the integrity of the election, and issues of race and violence.

But Wallace also said the topics could be "subject to possible changes because of news developments," leaving a possible opening for both men to be asked about a Sunday report in The New York Times that Trump only paid $750 in taxes in 2016 and $750 during his first year in office.

The pitch to undecided voters

With more than a dozen states already mailing out ballots to voters, both campaigns view the 90-minute televised debate as a critical opportunity to sway undecided voters, particularly in swing states where Trump and Biden are polling tight, such as Arizona and Florida.

Mac McCorkle, director of Duke University’s Center for Politics, said with most polls showing Biden leading Trump, the first debate will be one of the last opportunities for Trump to make a substantial dent in that lead, after the party conventions failed to move the needle much for either candidate.

"People are already sending in their mail ballots, so there's a certain diminishment to the importance of debate simply because a lot of people have already decided," said McCorkle. "I think people are getting more used to the notion of an election season rather than Election Day … some people are making their decisions even earlier, and are less prompted to change, all that said though, this is kind of the last main event of the series for President Trump to dent Biden’s lead."

Biden is leading Trump by an average of 7 percentage points according to an analysis by the poll tracking website Real Clear Politics of polls taken between Sept. 12 and Sept. 25.

In 2016, Trump staged a pre-debate news conference featuring three women who had previously accused President Bill Clinton of sexual improprieties. The move was seen as an attempt to unnerve his opponent Hillary Clinton and distract from the scrutiny facing Trump over his lewd remarks toward women made public on an "Access Hollywood" tape.

Biden campaign officials have said they are expecting Trump, a former reality TV star on "The Apprentice," to look for opportunities to rattle Biden, but they contend the former vice president will not be shaken.

“I hope I don’t get baited into getting into a brawl with this guy."

"I hope I don’t get baited into getting into a brawl with this guy," Biden told supporters in a recent virtual fundraiser. "It’s going to be hard because I predict he’s going to be shouting."

On Sunday, Trump offered a preview of the posture he will take Tuesday, suggesting on Twitter that he will demand both candidates get drug tested and making an unsubstantiated claim that Biden’s effective performances in past debates were the result of performance enhancing drugs.

For months Trump, 74, has been hammering away at Biden's age, calling into question the mental agility of the 77-year-old, but the president has pivoted away from that talking point in the past few weeks, describing Biden as a skilled debater instead, a move political analysts say is likely aimed at buffering expectations for Trump's performance.

"That's somewhat of the problem that [Trump] set for himself," McCorkle said. "He has portrayed Biden as totally incompetent, and somebody who's incapable of presenting, somewhat ironically like people to treated [Ronald] Reagan in 1980, and we found that Reagan was able to meet, and maybe exceed that bar."

Trump campaign spokeswoman Erin Perrine told Fox News last week: "We do expect Joe Biden to show up and try and spar against President Trump. Obviously, we know President Trump will show up in grand fashion as well."

Jill Biden, in an interview with CNN, said her husband will respond like a "statesman" should Trump revive his attacks on Biden’s son, Hunter, over his foreign business dealings.

"When the American people see Joe Biden up there on that stage, they're going to see what a president looks like, someone who is … calm, steady, strong, resilient."

John P. Koch, director of debate at Vanderbilt University, said during the 2016 campaign season Trump was "successful in debates by creating moments that are memorable, appeal to his base, and control the media narrative following the event."

The Supreme Court vacancy created by the recent death of liberal Justice Ruth Bader Ginsburg has become a rallying point for both campaigns, and both Trump and Biden are sure to continue to argue about the ethics of Trump nominating conservative Judge Amy Coney Barrett — an appointment that could impact the court for decades — so close to an election.

Trump, who has appointed two conservative justices to the nation’s highest bench and has packed lower courts with conservative appointees, has made reshaping the makeup of the courts a key pitch in his appeal to evangelical Christian voters and conservatives.

Both candidates have used the future of the Supreme Court in their appeals to female voters, with Biden promising to nominate the first Black woman to the nation’s highest bench if elected, and Trump campaign surrogates touting his nomination of Barrett as a move that will be likely motivate suburban women voters.

The debate over the next Supreme Court selection comes as recent polls show a majority of voters believe the victor of the November election should name Ginsburg’s replacement.

A poll by Reuters-Ipsos released two days after Ginsburg’s death found 62% of voters believed the winner of the election should decide the nominee. The poll had a margin of error of plus or minus 4 percentage points.

Biden has spent much of the past week preparing for the debate in closed-door mock sessions, while Trump told reporters he has opted for a less informal preparation schedule, fielding questions from his campaign advisers between campaign events, including from his attorney Rudy Giuliani and former New Jersey Gov. Chris Christie, who were both at the White House on Sunday.

“You know what I do is debate prep every day. I'm taking questions from you people all the time.”

"We had a little debate prep before we came here," Trump said before describing his interactions with reporters as preparation. "You know what I do is debate prep every day. I'm taking questions from you people all the time."

Biden, when asked about his expectations for the debate told MSNBC on Saturday: "I’m prepared to go out and make my case as to why I think he’s failed and why I think the answers I have to proceed will help the American people, the American economy and make us safer internationally."

The ability of Biden to emerge the victor after nearly a dozen Democratic primary debates, and Trump to emerge from a likewise crowded Republican primary field in 2016 bodes well for both candidates, said Koch, a senior lecturer at Vanderbilt.

"In terms of performance, they have both been through several primary and general election debates at this point in their careers and have now become the standard-bearers for their party," said Koch. "This means their debate performances have helped them, or at least not hurt them. Joe Biden is better in two-person debates, as demonstrated by the vice-presidential debates in 2008 and 2012, as well as his debate against Bernie Sanders this year. I would expect him to be prepared and ready for this debate."