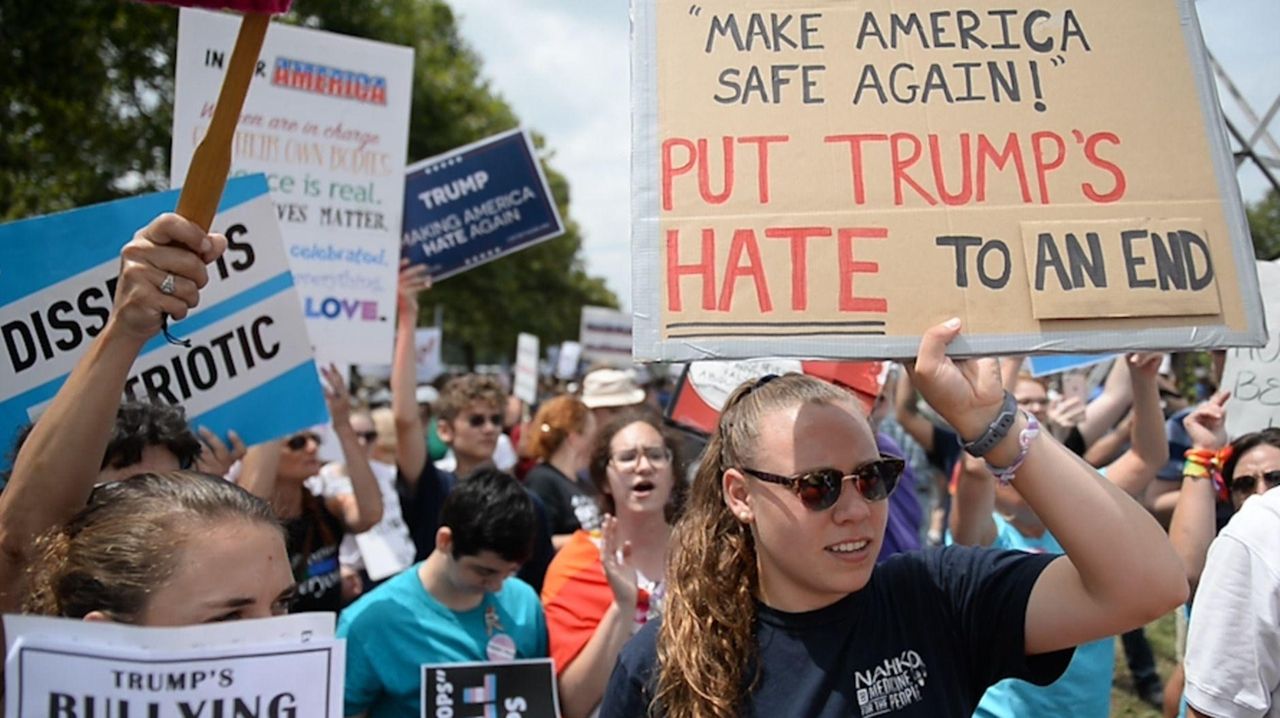 As President Donald Trump addressed police personnel at the Brentwood campus of Suffolk County Community College, protesters gathered outside to rally against his policies, on Friday, July 28, 2017.  Credit: Steve Pfost

About 70 Trump supporters came out too, gathering outside the gates of Brentwood State Park, opposite the protesters who at times chanted “Lock him up” and “Immigrants are not to blame; no terror in our name.”

“I think MS-13 is guilty of great violence and murder and needs to be dealt with, but should not be used as an excuse for his bigoted and racist platitudes,” said Jean Sidebottom, 66, of Ronkonkoma. “It needs to be treated seriously — not for his political agenda.”

Trump supporter James Thompson, 60, a nurse from Miller Place, held a sign that read: “Respect the rule of law. Respect our President! Trump 2020!”

James Thompson, 60, of Miller Place, talks about his support for President Trump at Brentwood rally opposite protests pic.twitter.com/87SCDKW8AI

“I’m here to support the president and the attorney general in their fight against MS-13 and illegal immigration,” Thompson said. “I’m just looking forward to hearing about his support to the takedown of these groups, MS-13.”

The anti-Trump protesters — a coalition of immigrant-advocacy, LGBT rights, women’s rights and labor groups — spoke out against the administration’s crackdown on undocumented immigrants, resulting in a surge of deportations.

“We are suffering through a gang issue right now and in order for the police to solve these crimes and do their jobs right we are going to need the cooperation of the public,” Ramos said. “If they start to terrorize the community with immigration raids, the victims of gang violence will be reluctant to report it. Trump’s visit here is going to . . . impede the investigations and the good work that the police have done.”

Trump’s emphasis on an MS-13 crackdown and deportations has a corrosive effect in the immigrant communities, as the public comes to see law enforcement as a threat, advocates said as about 30 people started the day protesting outside the police department’s Third Precinct in Bay Shore.

“Over the past year, we’ve heard the narratives and rhetoric coming from the new administration: Mexicans are rapists; Muslims are terrorists that need to be banned and, now, Central Americans are criminals coming here to bring violence to our communities,” said Nathan Berger, an immigration advocate with Rural and Migrant Ministry based in upstate Poughkeepsie.

“We know this isn’t true and we know this to be racist,” Berger added, saying to local law enforcement that “if you are going to cooperate with the administration’s requests” on deportations “you are complicit with racism.”

“Let’s be very clear. We’re talking about violent gang members,” Sini said. “We are not going to make apologies for cooperating with federal law enforcement authorities on serious, dangerous, violent criminals . . . We’re focused like a laser on MS-13.”

Sini said he’s “very empathetic” with the immigrant community’s concerns and said only “a very small percentage of the undocumented population” is linked to gangs.

Trump supporter Doodnauth Punwasi, 57, of Central Islip, came to the campus holding a small American flag and hoping to see the president.

Punwasi, who said he immigrated 30 years ago from Guyana, said the killings of four young men in Central Islip earlier this year was near his home and he supports the president’s push to deport immigrants here illegally.

“I think the president’s doing a good job. “If you want to come, come legally and respect the law of America . . . If you come and create violence for other people, it’s not good.”

This story was reported by Sarah Armaghan, Nicole Fuller, Mark Morales and Víctor Manuel Ramos. It was written by Fuller.