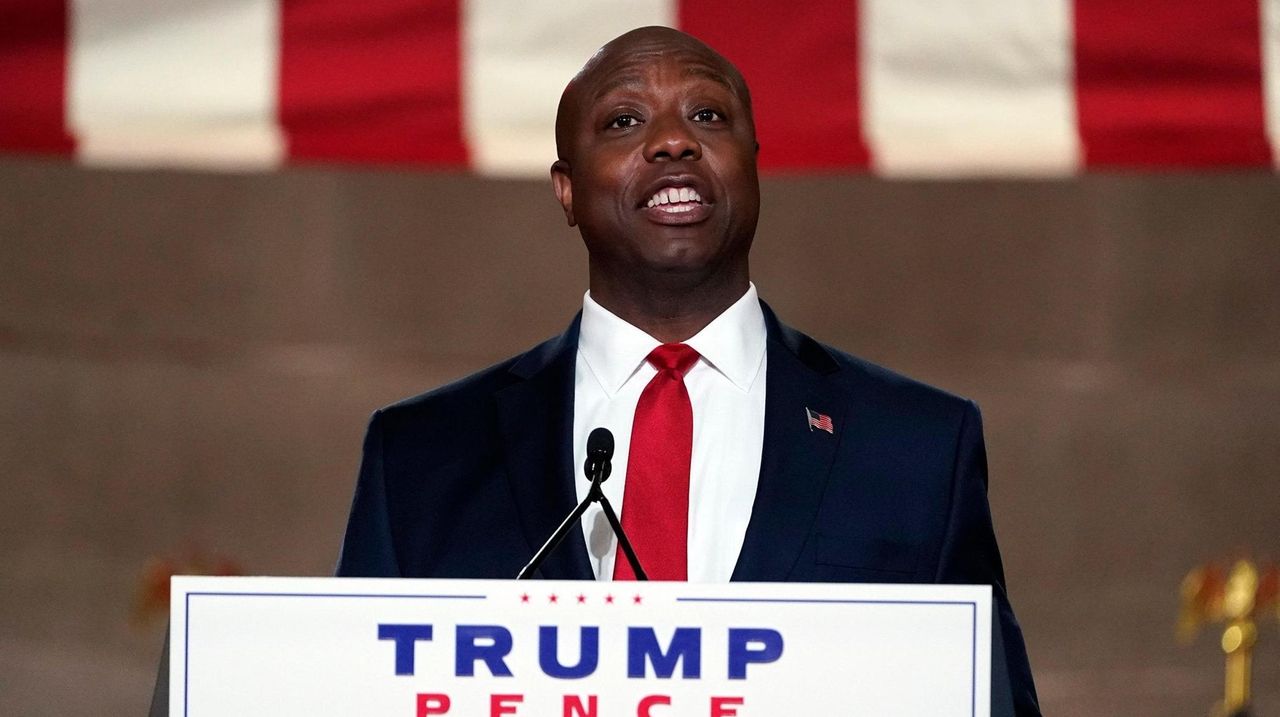 Tim Scott, the only Black GOP senator, was the closing speaker at the Republican National Convention on Monday. Credit: AP

WASHINGTON — Two of the Republican Party’s rising stars, both people of color, offered an optimistic view of President Donald Trump’s leadership on Monday night, closing the opening night of the GOP’s scaled-back convention with a positive message at odds with the dark warnings that dominated much of the night.

While other Republicans predicted a national “horror movie” should Trump lose in November, Sen. Tim Scott and former UN Ambassador Nikki Haley tried to welcome new voters to the party to help broaden Trump's appeal beyond his hard-core base.

“I was a brown girl in a black and white world,” Haley said, noting that she faced discrimination but rejecting the idea that “America is a racist country.” She also gave a nod to the Black Lives Matter movement, saying “of course we know that every single Black life is valuable.”

Scrambling to find a message that sticks, Trump’s team tried out multiple themes and tactics over the course of the night: There were humanizing stories about the president along with the optimistic message about America's future with him at the helm — and plenty of dire talk about the threat posed by a Joe Biden presidency.

Scott, the Republican Party’s only Black senator, leveled the kind of personal attack against Biden that Trump and his white allies could not.

He acknowledged that African Americans have sometimes been victimized by police brutality, but later said: “The truth is, our nation’s arc always bends back toward fairness. We are not fully where we want to be ... but thank God we are not where we used to be.”

Yet efforts to strike an optimistic tone were frequently overshadowed by warnings that Biden would destroy America, allowing communities to be overrun by violence.

Rep. Matt Gaetz of Florida likened the prospect of Biden’s election to a horror movie. 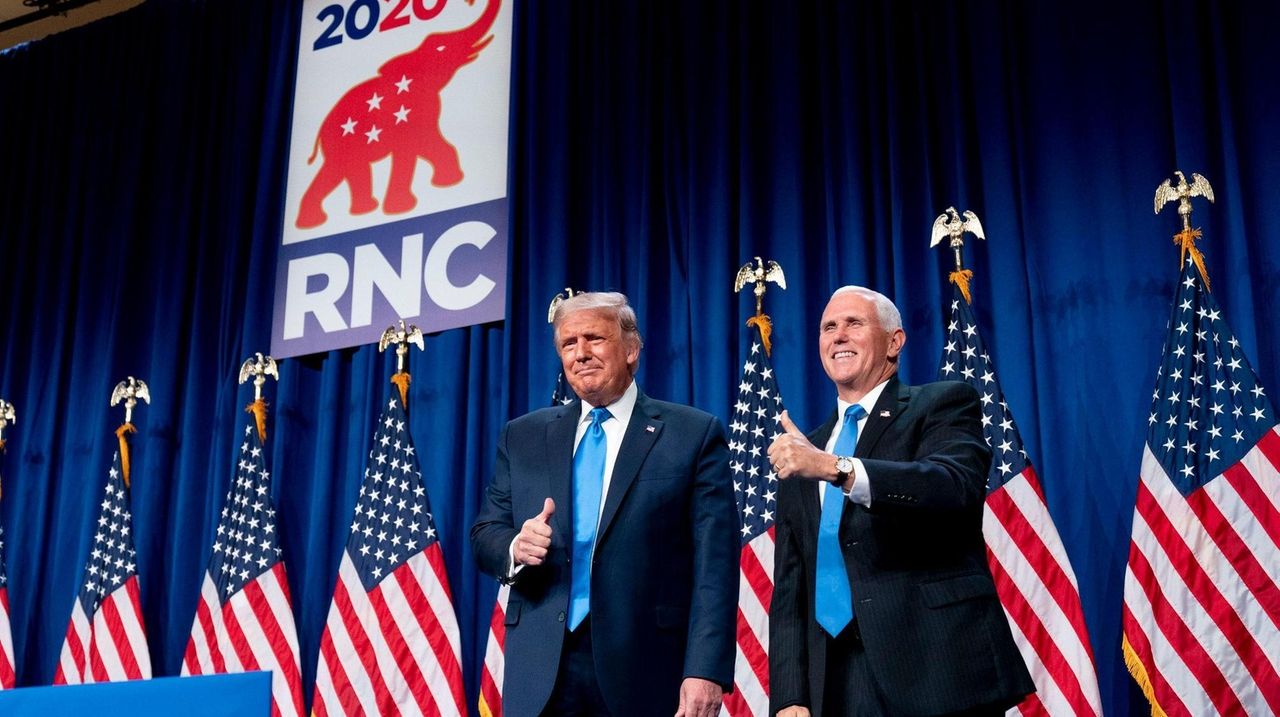 “They’ll disarm you, empty the prisons, lock you in your home, and invite MS-13 to live next door,” Gaetz declared.

Donald Trump Jr. ridiculed Biden with name-calling in a fiery speech to the televised convention.

More broadly, the president's eldest son painted his father's opponent for the presidency as part of a movement aimed at stripping the nation of its most basic freedoms.

"In the past, both parties believed in the goodness of America," the younger Trump said. "This time, the other party is attacking the very principles on which our nation was founded," Trump Jr. said, citing freedom of thought, speech, religion and the rule of law.

The GOP convention marks a crucial moment for Trump, a first-term Republican president tasked with reshaping a campaign he is losing by all accounts, at least for now.

A deep sense of pessimism has settled over the electorate 10 weeks before Election Day. Just 23% of Americans think the country is heading in the right direction, according to a new poll from The Associated Press-NORC Center for Public Affairs Research.

Trump and Vice President Mike Pence both were renominated early in the day. Then Trump, who was not scheduled to deliver his main address until later in the week, made multiple public appearances throughout the first day of the four-day convention. And while the evening programming was carefully scripted, Trump was not.

“The only way they can take this election away from us is if this is a rigged election,” Trump told hundreds of Republican delegates gathered in North Carolina, raising anew his unsupported concerns about Americans’ expected reliance on mail voting during the pandemic. Experts say mail voting has proven remarkably secure.

Trump and a parade of fellow Republicans distorted Trump rival Joe Biden’s agenda through the evening, falsely accusing the Democrat of proposing to defund police, ban oil fracking, take over health care, open borders and raise taxes on most Americans. They tried to assign positions of the Democratic left to a middle-of-the-road candidate who explicitly rejected many of the party’s most liberal positions through the primaries. Trump set the tone with unsupported claims about voting fraud and falsehoods about his own record in office.

The Republican convention comes as more than 177,000 Americans have been killed by the pandemic and millions more have been infected. Coronavirus-related job losses also reach into the millions

Trump and his supporters on Monday night touted his response to the pandemic while standing alongside front-line workers in the White House, although he glossed over the mounting death toll, the most in the world, and his administration's struggle to control the disease.

Organizers also repeatedly sought to cast Trump as an empathetic figure, borrowing a page from the Democrats' convention playbook a week ago that effectively highlighted Biden's personal connection to voters.

The evening program highlighted the tension within Trump's Republican Party. His harsh attacks against Democrats who are trying to expand mail voting and demonstrators protesting deaths in police custody, for example, often delight his die-hard loyalists. Yet the party pointed to a somewhat more diverse convention lineup with a more inclusive message designed to expand Trump's political coalition beyond his white, working-class base.

One of several African Americans on the schedule, former football star Herschel Walker, defended the president against those who call him a racist.

“It hurts my soul to hear the terrible names that people call Donald,” Walker said. “The worst one is ‘racist.’ I take it as a personal insult that people would think I would have a 37-year friendship with a racist.”

Polling shows that Black Americans continue to be overwhelmingly negative in their assessments of the president’s performance, with his approval hovering around 1 in 10 over the course of his presidency, according to Gallup polling.

“Democrats no longer view the government’s job as protecting honest citizens from criminals, but rather protecting criminals from honest citizens," the McCloskeys said in remarks that broke from the optimistic vision for America organizers promised.

They added: “Make no mistake: No matter where you live, your family will not be safe in the radical Democrats’ America."

Those cheering Trump’s leadership on the pandemic included a coronavirus patient, a small business owner from Montana and a nurse practitioner from Virginia.

“As a healthcare professional, I can tell you without hesitation, Donald Trump’s quick action and leadership saved thousands of lives during COVID-19,” Amy Ford, a registered nurse who was deployed to New York and Texas to fight the coronavirus.

Some of the planned remarks for the evening program were prerecorded, while others were to be delivered live from a Washington auditorium.

The fact that the Republicans gathered at all stood in contrast to the Democrats, who held an all-virtual convention last week. The Democratic programming included a well-received roll call video montage featuring diverse officials from across the nation. The Republicans spoke from the ballroom in Charlotte and were overwhelmingly white.

The president has sought to minimize the toll of the coronavirus pandemic and he barely addressed it on Monday, but its impact was plainly evident at the Charlotte Convention Center, where just 336 delegates gathered instead of the thousands once expected to converge on this city for a week-long extravaganza. Attendees sat at well-spaced tables at first and masks were mandatory, though many were seen flouting the regulation.

Mecklenburg County Health Director Gibbie Harris said she had “shared concern about the lack of mask wearing and social distancing in the room” with RNC staff and had “been assured that they are working hard to address these issues.”

While he campaigned aggressively across the country throughout last week’s Democratic convention, Biden made no public appearance on Monday.