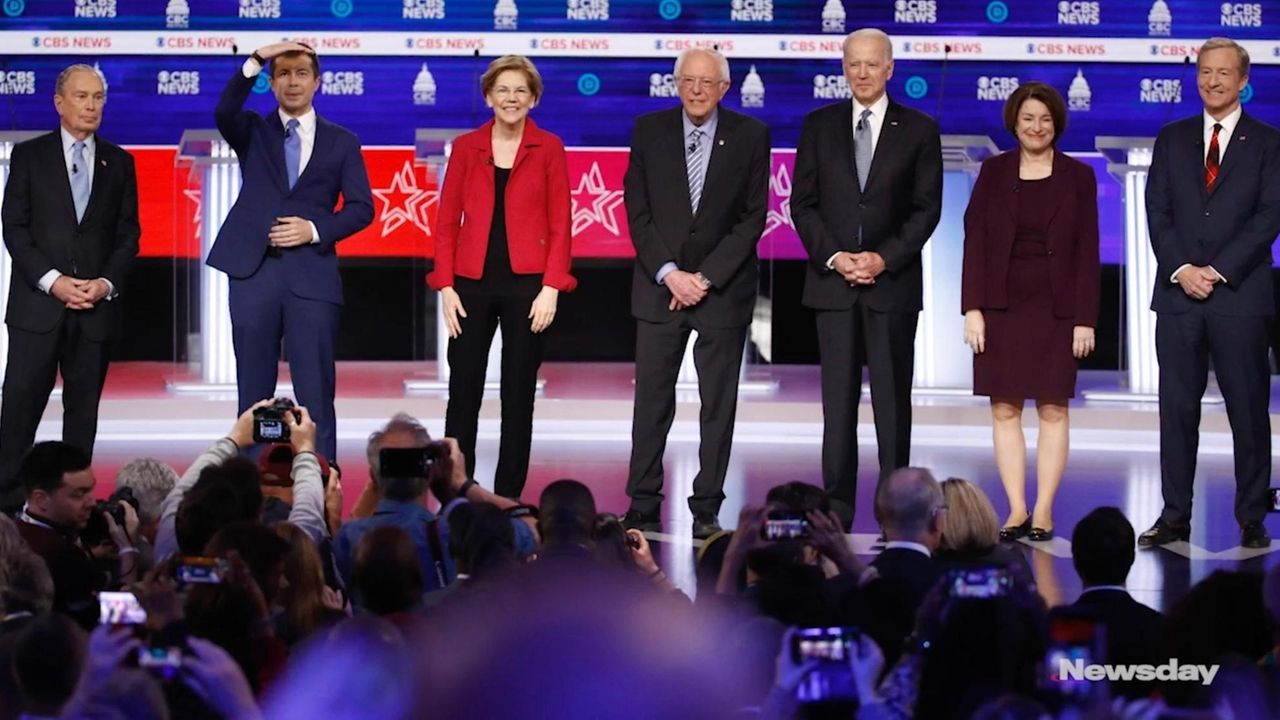 But after a two-hour slugfest, during which the seven candidates often talked over one another, political analysts largely agreed that neither man was vanquished.

William Howell, a political science professor at the University of Chicago, noted the “frantic” tone of the debate's first half and said there was no stand-alone winner of the night, unlike in past debates.

“The conversation was disjointed; it was hard for anyone to emerge from that,” Howell said.

Sanders’ rivals sought to stop his momentum after his victories in New Hampshire and Nevada. They attacked him for recent remarks in which he gave partial praise to the late Cuban leader Fidel Castro’s support for literacy programs, and they tried to paint Sanders as too far left to defeat President Donald Trump in the general election.

Bloomberg, seeking a comeback from his widely panned debate performance last week, immediately took a shot at Sanders. Bloomberg seized on Sanders’ disclosure last week that intelligence officials told his campaign that Russian operatives were seeking to interfere in the 2020 election by boosting his candidacy through social media disinformation campaigns.

“That’s why Russia is helping you get elected,” Bloomberg said.

“Oh, Mr. Bloomberg,” Sanders replied, and then declared, “Hey, Mr. Putin, if I’m president of the United States, trust me, you’re not going to interfere.”

Buttigieg argued that Sanders, if nominated, would hurt down-ballot candidates, saying it would be hard to lure crossover voters with a presidential contender “telling people to look on the bright side of the Castro regime.”

Biden took aim at Sanders’ votes against strict gun control measures, prompting Sanders to concede that his vote against the Brady bill was a mistake.

But Sanders also quipped: "I’m hearing my name mentioned a lot. I wonder why.”

Monica Klein, a New York-based Democratic campaign strategist, said, “After three primary victories, Bernie was the one to take down — and no one managed to land a knockout hit that could leave lasting damage" to his campaign.

“With Bloomberg onstage, Bernie wasn’t the only one taking hits … the overall chaos and crossfire kept Bernie from facing two straight hours of attacks,” Klein said.

Bloomberg back on defense

Bloomberg again was confronted with questions about his record as mayor and as CEO of his giant media company.

Political analysts said Bloomberg appeared to be better prepared for questions about the controversies in his political and business life, but he also struggled with some of his attempts at humor.

“Bloomberg did better this time than he did the last time,” said Howell. “He’s presenting himself as a realist technocrat, and so if you’re undecided and you’re looking for a moderate, and that type of person is attractive to you, you might have something to take away from the night.”

Warren returned ready to attack Bloomberg. Early in the debate, she brought up his past support for Republican candidates, particularly Sen. Lindsey Graham (R-S.C.), a one-time Trump skeptic who has become one of the president's staunchest supporters on Capitol Hill.

“I don’t care how much money Mayor Bloomberg has, the core of the Democratic Party will never trust him. He has not earned their trust. I will,” Warren said.

Bloomberg responded: “I have been training for this job since I stepped on the pile that was still smoldering on 9/11. I know what to do. I’ve shown I know how to run a country. I’ve run the city, which is almost the same size — bigger than most countries in the world … I’m the one choice that makes some sense.”

He noted his vast spending to help flip congressional districts for Democrats in the 2018 midterm election. And he aggressively denied allegations that he once told a pregnant employee to "kill it."

The debate also provided Bloomberg with a chance to respond to policy questions.

He argued against a full withdrawal of troops from the Middle East, saying that doing so in the wake of the Sept. 11, 2001, attacks would be “irresponsible.” He also touted his work on behalf of gun control as founder and funder of the advocacy group Everytown for Gun Safety.

And he was asked if he would seek to implement the ban on sugary drinks he sought as mayor.

"What’s right for New York City isn’t necessarily right for all cities, otherwise you’d have a ‘Naked Cowboy’ in every city,” Bloomberg replied. The line about the Times Square street performer was one of several Bloomberg dropped throughout the night — and fell flat with the audience and among those following along on social media.

Each candidate sought to shore up support among black voters as they headed into the South Carolina primary. Blacks are expected to account for 60% of voters Saturday.

Biden, looking to notch a victory in South Carolina to revive his campaign after losses to Sanders in Iowa, New Hampshire and Nevada, expressed confidence in winning the state, when he was asked about polls showing Sanders gaining on him.

"I’ve earned the vote … I’ve worked like the devil to earn the vote of the African American community,” Biden said.

Buttigieg, who has struggled to gain the support of black voters, noted the lack of diversity in a field of Democrats that once featured Latino, black and Asian candidates.

“I’m conscious of the fact that there’s seven white people on this stage talking about racial justice,” Buttigieg said. “None of us have the experience, the lived experience of, for example, walking down the street or in a mall and feeling eyes on us, regarding us as dangerous without knowing the first thing about us, just because of the color of our skin.”

Buttigieg’s remarks came after Bloomberg was asked about his past support for the NYPD’s stop-and-frisk policing tactic during Bloomberg's three terms as mayor.

Bloomberg, who has since sought to distance himself from the policy and has apologized for its use, noted his recent endorsements from several prominent black lawmakers. He said he had met “with black leaders to try to get an understanding of how I can better position myself, and what I should have done and what I should do next time."

He said that after he discovered the police were doing too many stop-and-frisks, he reduced the practice by 95%. Online fact-checkers, including CNN, pointed out quickly that the dip in cases occurred during the last two years of his 12 years as mayor, following a dramatic increase in stop-and-frisk in the first decade of his tenure.

Klein said that “every minute the debate spends on stop-and-frisk is another minute Bloomberg is losing.”

She continued, “Instead of going on the offensive, Bloomberg was caught flat-footed again — sounding defensive and irritated that he had to answer for his 12-year tenure overseeing the NYPD.”

Klein said Bloomberg struggled to “project sincerity” in his answers.

Former Rep. Steve Israel, a Huntington Democrat who supports Biden’s campaign, said “every candidate left the stage with a sense of accomplishment.”

Bloomberg "rebounded from a very poor debate performance a week ago,” said Israel, director of Cornell University's Institute of Politics and Global Affairs.

“A revitalized Vice President Biden reminded people that he can be relatable but informed," Israel said. "Sen. Sanders took a bunch of punches but didn’t fall flat.”