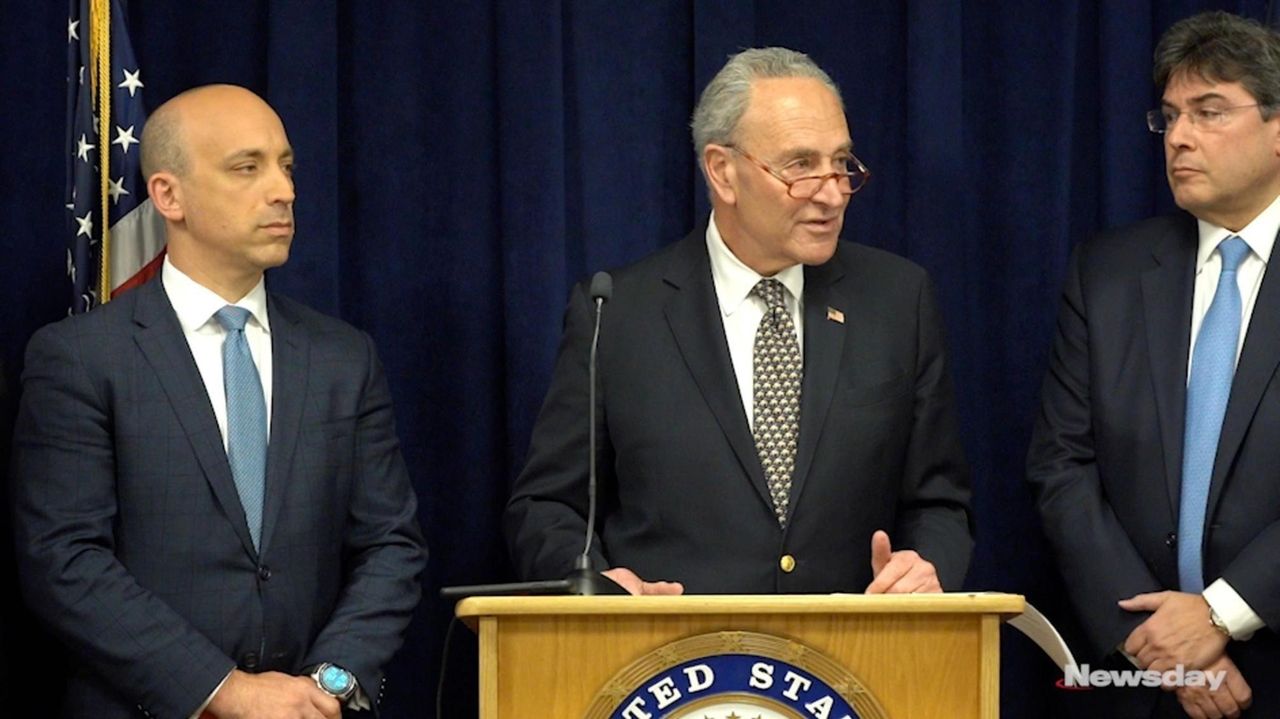 On Monday, Sen. Chuck Schumer responded to the attacks on Hanukkah celebrants in Monsey and worshippers at the West Freeway Church of Christ in Texas, calling on the federal government to boost funding for security at houses of worship and the prosecution of hate crimes.  Credit: Charles Eckert

Sen. Chuck Schumer, responding to the weekend attacks on Hanukkah celebrants in Monsey and worshippers at the West Freeway Church of Christ in Texas, called on the federal government Monday to significantly boost funding for security at houses of worship and the prosecution of hate crimes.

The Senate minority leader, joined by representatives of the Jewish, Christian, Muslim and Sikh communities at a news conference at his Manhattan office, said attacks on churches, synagogues and other religious places in recent years have become “a national crisis.”

“What happened two nights ago in Rockland County and happened in Texas the following night is part of a cascade of violence and intolerance in America,” Schumer continued. “It has risen to a boiling point. We need much stronger federal action.”

Congress agreed to increase funding for not-for-profit security grants, provided to houses of worship and other nonprofit organizations, from $60 million to $90 million for 2020. But in the wake of the weekend attacks on Jewish and Christian worshippers, Schumer said the government should quadruple funding for the grants over the next few months to $360 million.

“Going from $60 million to $90 million had strong bipartisan support,” Schumer said. “I believe this will too.”

Schumer said the funds could be used to hire trained guards or install heavy doors, cameras, fencing and other security systems.

“There has been a need for resources but it hasn’t been funded to the extent is should,” Schumer said. “Five million should go up to $100 million.”

Jonathan Greenblatt, CEO and national director of the Anti-Defamation League, said the spike in anti-Semitic hate crimes in recent years represents an assault on American democracy.

“In a moment where Jewish people are not safe in the supermarkets where they shop, in the synagogues where they pray and in the homes where they celebrate, we all have a problem,” Greenblatt said.

“They are not just anti-Semitic, they are anti-American,” Greenblatt said of the attacks on Jews in Monsey and elsewhere. “They are attacks on all of us. They get to the essence of what is special about our democracy, which is that it celebrates and honors our differences.”

The Rev. Darrell da Costa, pastor of Our Lady of Fatima Roman Catholic Church in Queens, echoed Greenblatt’s statement. “When we target one person, one group, it targets us all. Hate has no reason. Hate is destructive to the fabric of our city.”

Schumer said it was important for leaders of different backgrounds to come together Monday to call for action and condemn the attacks in Monsey and Texas.

“Just the picture of all of us here from so many different backgrounds, it says to the Jewish community, you are not alone,” Schumer said. “But it says to every other community that, God forbid, when you are attacked you will not be alone either.”