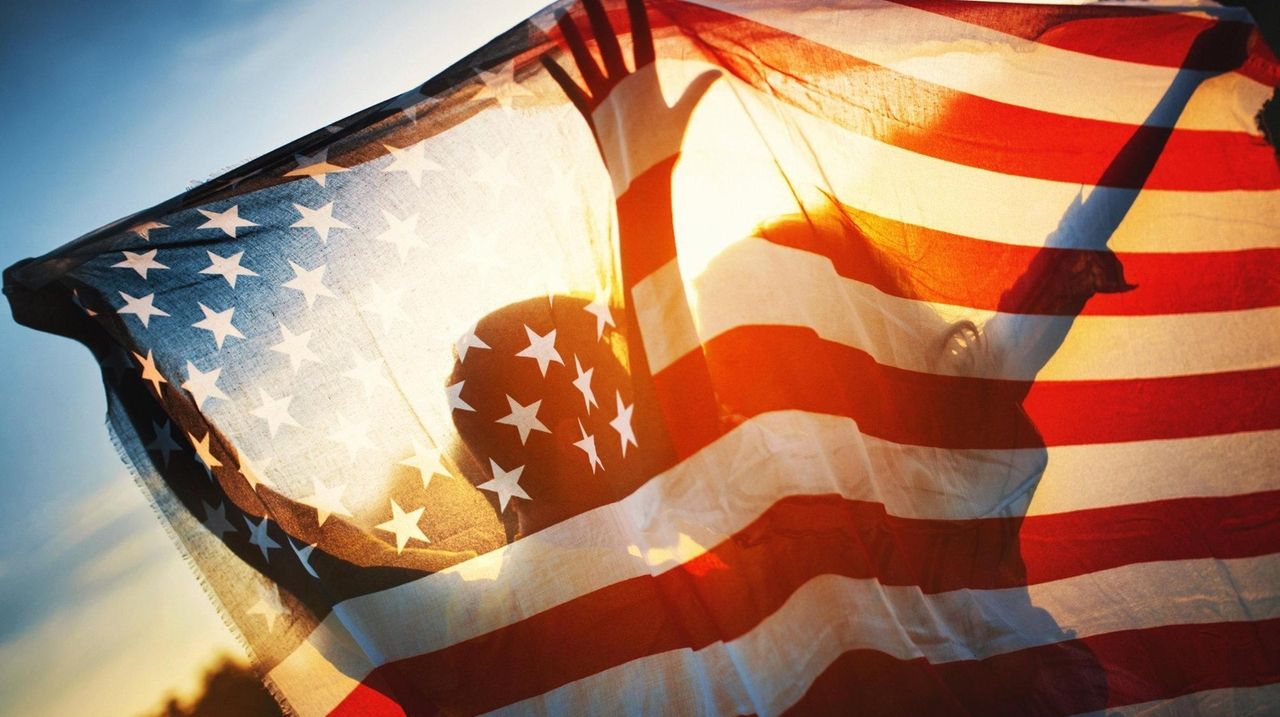 Long Island residents react to the extensive national survey conducted by Siena College which asked 6,000 Americans for their thoughts about what unites us and what divides us. Newsday's Steve Langford reports. Credit: Newsday / Reece T. Williams

Americans share core values and pride in our nation, but profound divisions over race and political issues such as abortion and the 2020 presidential election, along with concerns about a lack of empathy and dedication to the common good, have many worried about the fate of the country, according to a national survey conducted by Siena College.

The study, "America at a Crossroads: Can We Save Our Union?", surveyed more than 6,000 Americans on what divides and unites us, as well as gauging their hopes for the nation’s future.

It also sought to "measure dedication to elements of our central principles," such as liberty, equality and progress.

Siena found Americans, no matter where they live or land on the political spectrum, expressed strong support for core values. They strongly agree with ideas such as all people are created equal, no one is above the law and treating others as you would have them treat you. They say we are held together by our Constitution, Bill of Rights and Declaration of Independence.

And the respondents are hopeful in general: Almost 90%, no matter left or right politically, agreed tomorrow always holds the possibility of a better day.

But we are divided stridently on some high-profile issues, not surprisingly including immigration, abortion and Donald Trump's unfounded claims about his 2020 election defeat, the survey found.

Beyond the survey questions, Siena conducted extensive interviews with 20 respondents, using open-ended questions, to get a sense of their view of the state of the union.

Social media, hardening partisanship, Trump’s false claims about the 2020 election, frustration with an unproductive Congress and the quest for personal enrichment threaten to rip up the nation, possibly even fracturing it permanently, the interviewees said.

"Are we divided? Yes. Do we share core values? Absolutely. Are we proud to be Americans? For the most part. Do we think our great experiment will weather this storm? We’re somewhat hopeful, but concerned," Siena pollster Don Levy told Newsday.

He continued, in a Newsday interview: "Is there anything in our foundational values that will allow us to overcome the level of partisan destruction? Some of our interviewees said we are headed for break-up or even civil war. So, yeah, I think there is every reason to be worried, if not scared. The question is: What can be done about it?"

Chris Gibson, Siena College president and former Hudson Valley Republican congressman, said, "I am really concerned. We’re on a path to come apart and if we want to disrupt that path, then we need to pay attention to this survey and we need to take action."

What gives him hope is the survey shows "America still holds a common language" around liberty, equality and progress that is "consistent with our founding philosophy."

To do the survey, the Siena College Research Institute said it completed online interviews with a representative sample of 6,077 Americans, including respondents from all 50 states and the District of Columbia, from April 23 to May 3. Respondents were selected and agreed to participate via an online panel service while meeting demographic breakdowns on race, gender, geographic region, age and political affiliation that reflect the national electorate. The margin of error on the survey is plus or minus 1.3 percentage points.

There is strong support for principles of equality, liberty and progress, with about 80% of Americans across the board. And there is very little regional variation.

"I think that the belief that as flawed as our nation may be, we're the best approximation of that thing we're aspiring to. So I think we all share this desire that we're not going to give up on the Great Experiment," a 49-year-old woman, an independent voter from Maryland, told Siena, which provided demographic details of interviewees but not names.

"I think we have really strong social infrastructure to participate from the local to the federal level, whether that's in our hometowns, serving on civic elected bodies, or committees, or task forces, or volunteer organizations, and then all the way up to the national and even international levels, to have our voices be heard," she continued. "When we have that 1,000-foot perspective, we know that we can be part of a change that makes humanity better."

"Basically, we want the same thing," an 82-year-old Republican woman from Kansas said. "We want a decent job, a decent education for our kids, reasonable housing and opportunity to go as far as we possibly can on our own abilities."

It’s true people can tend to respond in an "aspirational tone," Levy said, leaving a "gap between values and behavior." For example, 83% of those surveyed said we should look out for the well-being of others, but just 69% agreed with the idea that "no person is complete if they do not give of themselves in service to others."

"One might argue that these values, whether we are talking about perceiving others as equal, being of service to others, saying that Americans should be self-reliant, endorsing free and varied speech, believing that no one is above the law, etc. mean different things to different people," Levy said. "However, we choose to highlight that beneath the current partisan divides, as real as they are, we find an underlying base of not just support for traditional American values, but more importantly, an assertion that those values guide us in our thoughts and actions on a daily basis."

New immigrants and first-generation Americans said Americans don’t realize the flexibility and opportunities they have.

"I’m a minority and I was a minority in another country, so there’s a big difference," said a 40-year-old male, an independent voter in California. "You all have opportunity to get somewhere here."

"I came here as an immigrant and I am excited with my progress," said a 75-year-old woman and an independent voter in Georgia. "You can find your place in this society."

Six questions in the poll provided the biggest differences of opinion and they come as no surprise: Abortion rights, assault weapons, voting rights, immigration, election integrity and "fake news."

While those issues are familiar, perhaps more telling of the American divide is 31% of respondents believe Trump’s unfounded claims that the 2020 election was stolen from him, despite being refuted by dozens of legal jurisdictions and government agencies. Courts have rejected virtually all of Trump’s claims.

Some poll respondents said such claims about the election are the single biggest cause of division among Americans.

"The election has been over for six months now and he’s still lying about winning the election … that people still believe him and the big lie," a 49-year-old Democratic man from Texas said. "You’re going to hold on to something that’s not true, based on someone else’s lie, even though there is no proof."

Dig deeper and respondents say they are troubled by current trends.

They say they see too many people — especially politicians — dividing into "teams" instead of cooperating. Or social media "ripping us apart." Some see a lack of understanding driven by hate speech and prejudice.

While some described Americans as tolerant and good-hearted, others used words such as abrasive, selfish and cutthroat, that it’s all about "I’m going to get mine."

"I actually don't really think there's one common thing or many common things that hold all Americans together anymore," a 40-year-old Democratic man from Illinois said. "But maybe there never was, but it just seems more prominent. I also have gotten older so maybe I'm more aware of those things."

"People were so polarized and now you politically can’t really speak what you believe without at least one person in the room deciding that they hate you," a 22-year-old woman from Colorado said.

Siena, in its analysis, said "race and racism" come up repeatedly as an issue dividing the nation. Some minorities said they feel "powerless."

But one thing was clear: "More than any other divisive factor, politics and politicians were brought up by respondent after respondent."

Politicians generally are seen as stoking divisions, more interested in "divide and conquer" than working together, respondents said. Some thought the fight against COVID-19 would force people to work together, but it hasn’t.

"They are not doing work. Everything is about whether you are a Republican or a Democrat. They can't work together," a 76-year-old Democratic woman from Colorado said. "I feel like everybody else is still stuck in that Trump crap. … Even though people say they want jobs for the population, then that kind of thing doesn't happen."

In contrast, a 55-year-old Delaware woman, an independent, said the four years Trump was in office improved the nation’s standing in the world: "I think the way Trump turned around and brought us back from how bad we were, ensuring we weren't going to take any mess, anything from anybody else and we stood up for ourselves and we took care of our own."

The influence of social media exacerbates the problem, some said.

Given the harsh assessments of current times, many told Siena the political climate will get worse before it gets better. Others said they were still hopeful. Because of the long march of progress over time. Or resiliency. Or the younger generations.

"I am very hopeful because we have already survived so much," said a 75-year-old woman, an independent voter from California. "I think we have a resilience. I hope we have."

"The younger generation. I think they are starting to be more acceptable to other people," said a 66-year-old man, a Democrat from California.

"I think America is in good hands," said a 57-year-old man, a Republican from Texas. "The population will be more diverse, more ethnic minorities, it's going to be a minority majority country, but we're going to still have those shared values and shared things that make us Americans. We're just going to have more and different perspectives. And so diversity is not something to be feared, so I think the way of life is going to be even better than it is now."

A 21-year-old Florida man, a Democrat, said he isn’t hopeful for the immediate future of the United States: "I guess introduction of Trump and his politics seems to be radicalizing more and more people. And in turn, that would radicalize people on the other side of the aisle in an attempt to move away from the right wing, even the GOP itself is somewhat splitting, and I think it's making it harder for America to work together."

Siena said some suggestions for holding together the union include getting Congress to reassert its power as legislators and stop deferring to the president or, even, the courts. Others are to: strengthen voting laws, revamp money’s role in political campaigns, consider congressional term limits and institute national service initiatives. Also, reward political compromises where the parties work together.

"Even though we share values, it’s like a language. If you don’t use it, you lose it," said Gibson, the former congressman. "If we don’t use these values, it’s going to fall out of use."