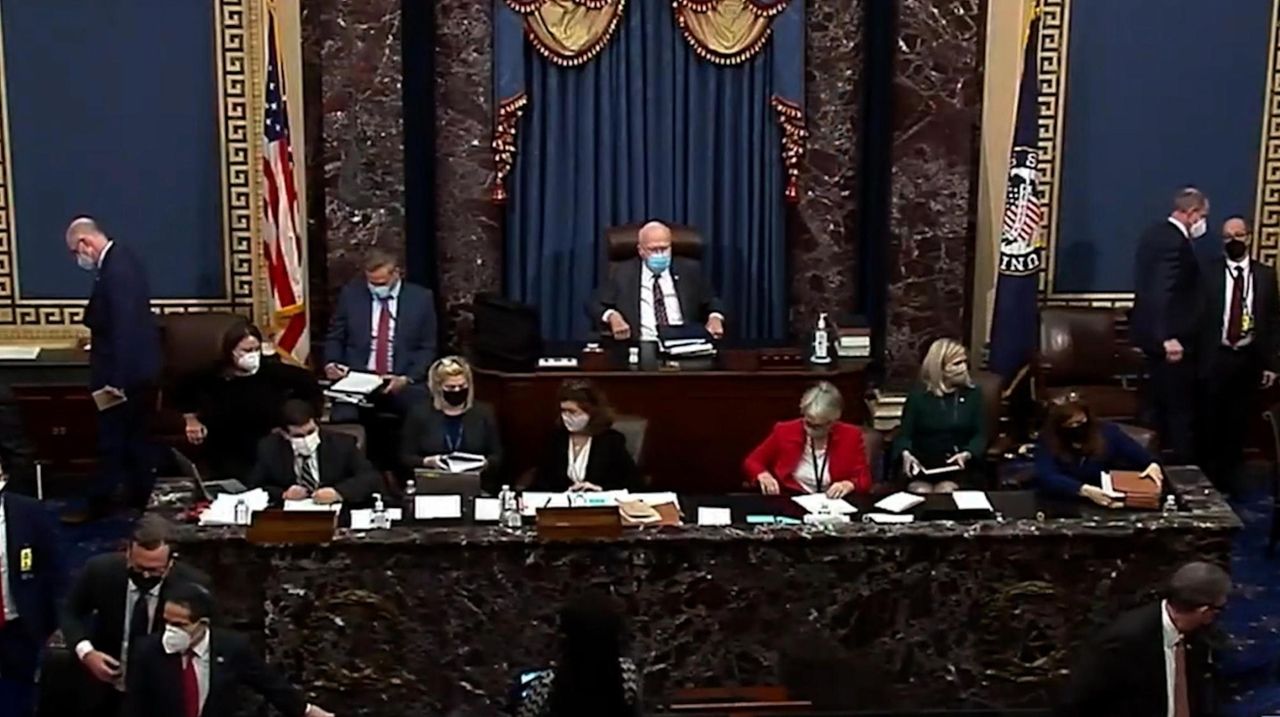 WASHINGTON – The impeachment trial of Donald Trump will go forward after a narrowly bipartisan vote Tuesday affirmed that the Constitution does allow the Senate to try the former president, after all, even though he no longer is in office.

Six Republicans joined the 50-member Democratic caucus in dispatching the first of the two major issues in the case: agreeing that the Senate has jurisdiction under the Constitution to try Trump on the charge of incitement of insurrection for the Jan. 6 ransacking of the Capitol.

The vote came at the end of a four-hour day of arguments that showed a sharp contrast between the well-coordinated and emotional presentation by the Democratic House managers and the disjointed and meandering appearances by Trump’s lawyers.

Trump’s legal defense team, thrown together with a week to prepare, did not appear to be ready to take on the Democrats’ well-honed, video-driven prosecution.

The Democrats didn’t even use the time they saved to rebut the Trump lawyers’ arguments — and that presentation actually lost a Republican vote.

The trial will resume at noon Wednesday, when Democratic House managers begin up to 16 hours of arguments over two days to present their case that the Senate should convict Trump of incitement of insurrection and be barred from future office. Trump’s defense will follow.

Here are some takeaways from the impeachment proceedings.

Democratic House managers said that if the Senate accepted Trump's lawyers’ argument that the Senate cannot hold an impeachment trial for an ex-president, it would create a new constitutional exception. They called it the "January exception." Rep. Jamie Raskin (D-Md.) explained in his opening remarks that a president throughout the vast majority of his four-year term would face an impeachment and trial for conduct of high crimes and misdemeanors. Yet Trump's lawyers are arguing that "if you commit an impeachable offense in your last few weeks in office, you do it with constitutional immunity," he said. "This would create a brand new January exception to the constitution of the United States of America." Trump lawyer Bruce Castor scoffed at the idea. "The idea of a January amnesty is nonsense," he said. "If my colleagues on this side of the chamber actually think that President Trump committed a criminal offense … after he’s out of office you can go and arrest him."

Raskin and his colleagues, Colorado Rep. Joe Neguse and Rep. David Cicilline of Rhode Island, made the case personal, opening with a hotblooded, 15-minute video of Trump’s exhortations to his loyalists that preceded the Jan. 6 ransacking of the Capitol — reminding the lawmakers they had to be led to safety that day. And then Raskin closed on a personal note. He had invited his younger daughter, Tabitha, 24, an algebra teacher, and his older daughter’s husband, Hank, to witness Congress’ certification of Biden’s election on Jan. 6, the day after Raskin and his wife buried their son Tommy, who died by suicide. When Tabitha asked if it would be safe, Raskin said of course, "it’s the Capitol." Yet during the melee, Tabitha and Hank had to hide in an office — "the kids hiding under the desk and placing what they thought were their final texts … They thought they were going to die," Raskin said. Afterward, Raskin told Tabitha it would be safe the next time she came to the Capitol. "She said, ‘Dad, I don’t want to come back to the Capitol," Raskin said. "Of all the terrible, brutal things I saw and heard on that day and since then, that one hit me the hardest."

Trump lawyer David Schoen opened his arguments with a blast at Democrats, accusing them of weaponizing impeachments for political gain. Schoen argued that Democrats denied Trump due process with a "snap impeachment" in the House and would deny him due process in the trial. He disputed the Democrats’ claim that the nation cannot heal until a trial holds Trump accountable for his behavior in inciting an attack on the Capitol and then failing to call it off. "A great many Americans see this process for exactly what it is," Schoen said, "a chance by a group of politicians seeking to eliminate Donald Trump from the American political scene and seeking to disenfranchise 74 million-plus American voters and those who dare to share their political beliefs and vision of America."

Bruce Castor Jr., a former Pennsylvania district attorney and acting state attorney general, opened for the Trump team by lecturing senators on their roles, calling out senators by name and generally meandering as he argued against allowing the trial to go forward. He made some salient points. He pronounced that Trump’s legal team would not defend his riotous supporters and urged senators not to act based on emotion but on the law. But as he spoke in nonlinear fashion, senators could be seen shifting in their seats. A Trump ally told reporters Castor’s presentation aimed to lower the temperature in the room "before dropping the hammer" on the constitutionality question by his colleague David Schoen. "I’ll be quite frank with you: We changed what we were going to do on account that we thought the House managers’ presentation was well done," Castor said. "And I wanted you to know that we have responses to those things."

A week ago, Sen. Bill Cassidy (R-La.) voted for a Republican resolution calling the Senate impeachment trial unconstitutional. But after hearing both sides make their cases, he switched and voted that the Senate does have jurisdiction for a trial. "Anyone who listened to President Trump's legal team saw they were unfocused, they attempted to avoid the issue, and they talked about everything but the issue at hand," Cassidy told reporters afterward. "The House managers had much stronger constitutional arguments." Even Sen. John Cornyn (R-Texas) expressed bewilderment, saying Castor "just rambled on and on and on and didn't really address the constitutional argument."

Police beg help, senators flee in chilling Trump trial videoIt shows the mob breaking into the Capitol, smashing windows and doors and searching menacingly for Vice President Mike Pence and House Speaker Nancy Pelosi as police begged on their radios for help. 1600: Beating impeachment isn't foolproof for TrumpOn the constitutionality of Trump's second trial, his lawyers' arguments failed to impress whereas the Democrats' did, gaining an unexpected GOP senator's vote to proceed. Senate votes to proceed with second Trump impeachment trialSenators voted 56-44 to proceed with Donald Trump's historic second impeachment trial, rejecting arguments by the former president's defense team questioning the constitutionality of the case because Trump is no longer in office. Janison: Twin hoaxes, of virus and votes, start to dieThe beginning of the end beckons for a pair of right-wing hoaxes of 2020.