President Donald Trump pauses during a news conference in the East Room at the White House in Washington on April 12, 2017. Credit: AP / Andrew Harnik

In an interview with The Associated Press, Trump said that while he is not explicitly endorsing Le Pen, the attack played to her strengths.

U.S. presidents typically avoid weighing in on specific candidates running in overseas election. But Trump suggested his opinion was no different from an average observer, saying, "Everybody is making predictions on who is going to win. I'm no different than you." 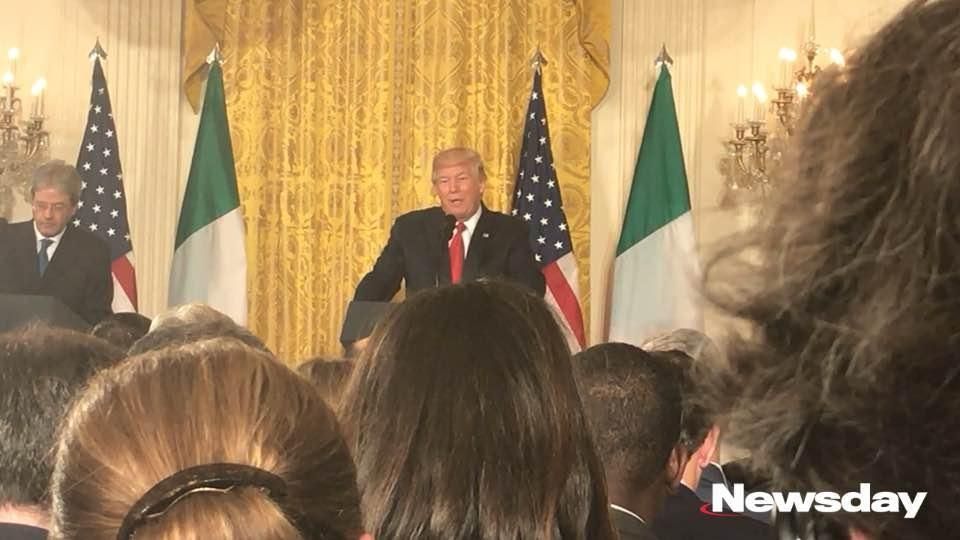 Trump sends condolences to Paris after shooting President Donald Trump speaks about a fatal shooting in Paris, adding of terrorism, "It just never ends." He made the remarks at a joint news conference with Italian Prime Minister Paolo Gentiloni at the White House on Thursday, April 20, 2017. (Credit: Newsday / Emily Ngo)

Sunday's vote is the first round in the French elections, with the top two candidates advancing to a winner-takes-all runoff on May 7. The high-stakes contest is viewed as something of a vote on the future of the European Union, with Le Pen calling for a referendum on France's membership in the bloc.

Le Pen has also echoed some of Trump's hard-line rhetoric on immigration, calling for hardening French borders to stanch what she describes as an out-of-control flow of immigrants.

Former President Barack Obama has also gotten involved in France's election, offering centrist candidate Emmanuel Macron his best wishes in a phone call Thursday, though he, too, stopped short of a full endorsement.

Macron's team released a video recording of the call, a highly unusual move as conversations among different countries' politicians are usually kept private.

A victory for Macron would be a vote of confidence in France staying in the EU. Obama, when he was in office, encouraged Britain not to leave, though it ultimately voted to do so anyway.

Trump backed Britain's decision to exit from the EU and has also predicted that other countries would make similar decisions. Yet during a White House news conference Thursday, the president said he believed in a strong Europe.

"A strong Europe is very, very important to me as president of the United States," he said.