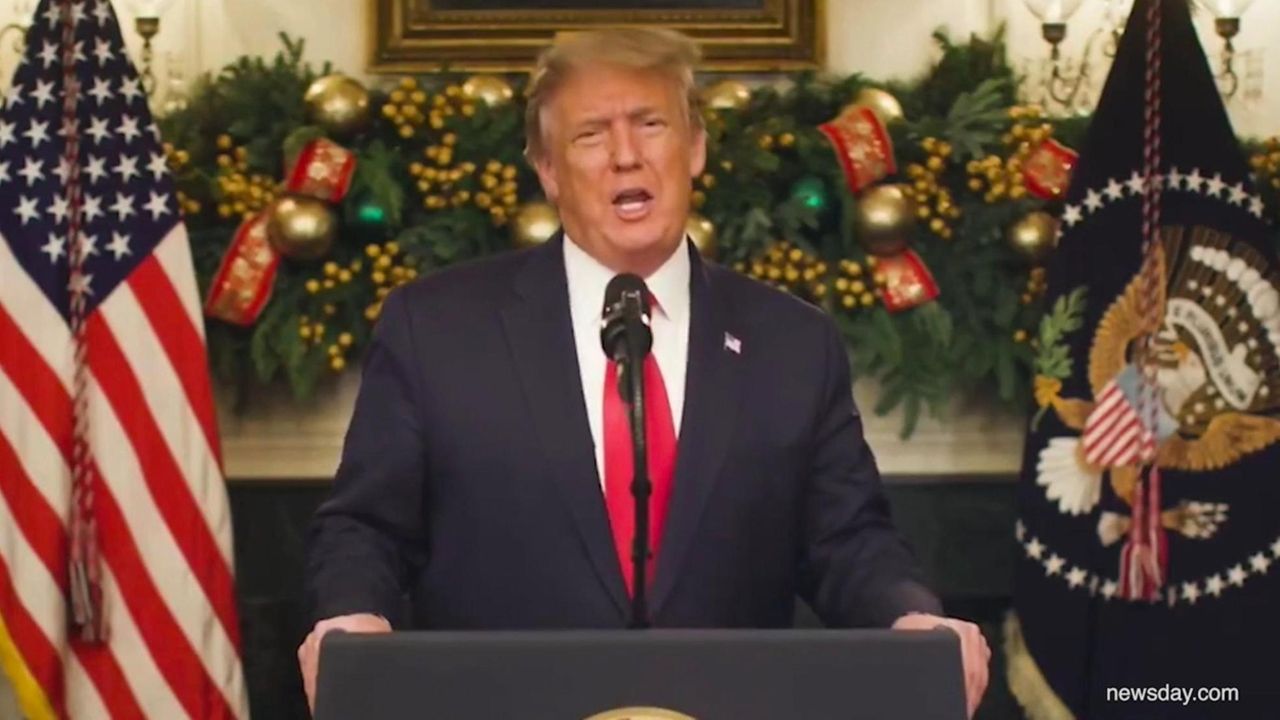 Outgoing Rep. Peter King (R-Seaford), a longtime Trump ally, issued a rare rebuke, telling "The Joe Piscopo Show" on AM 970 radio that Trump was "leaving Republicans out there hanging out to dry, after signing off on an agreement and asking us to vote for it."

Trump, in a video posted online Tuesday night, railed against the bipartisan spending agreement — passed by Congress on Monday and negotiated with White House officials — that includes $1 trillion in federal spending and $900 billion in coronavirus relief aid. He urged lawmakers to increase the amount of direct payments included in the relief funding to $2,000 for qualifying individuals and $4,000 for couples, even though Treasury Secretary Steve Mnuchin, his hand-picked lead negotiator on the deal, pressed for months to cap those payments at $600 for individuals earning less than $75,000 and $1,200 for couples earning less than $150,000.

King said he was puzzled by the timing of Trump’s video, saying the White House knew about the details of the deal from "beginning to end."

"Why didn’t the president say this before? Why did his administration say it had to be $600?" King said. "They were the ones driving this."

Rep. Tom Suozzi (D-Glen Cove) accused Trump of trying to divert attention from more than a dozen pardons the president doled out Tuesday. Trump’s video was posted 15 minutes after he announced the 20 pardons and commutations.

"He didn't want that to be the front page of the newspaper," Suozzi said. "The president is a master at diverting people's attention."

Rep. Lee Zeldin (R-Shirley), one of Trump’s staunchest supporters in Congress, issued a measured statement saying he was "on board" with improving the bill, while adding "it's also worth pointing out that much of the foreign and domestic spending being debated now originated in the President's budget request to Congress earlier this year."

Trump left the White House on Wednesday to spend the Christmas holiday at his Mar-a-Lago resort in Palm Beach, Florida. He ignored questions shouted by reporters about whether he planned to veto the spending measure.

House GOP Leader Kevin McCarthy (R-Calif.) reportedly told House Republicans in a conference call Wednesday afternoon that Trump had not yet decided whether he will veto or sign the current bill.

Trump, in his Tuesday video, appeared to conflate the two spending packages — one for coronavirus relief and one for overall federal operations — that were passed jointly by Congress as an omnibus funding bill on Monday. He railed against foreign aid and other domestic spending included in the $1 trillion allocated for federal government spending. Lawmakers on both sides of the aisle noted that some of those spending measures came at the request of the White House in its annual budget proposal.

House Speaker Nancy Pelosi (D-California), in a letter to House Democrats, said if Trump is "truly" serious about $2,000 "he should call upon Leader McCarthy to agree to" a measure House Democrats planned to put forward on Thursday calling for the increase.

Senate Majority Leader Mitch McConnell (R-Ky.) on Wednesday did not weigh in publicly on Trump’s calls to change the coronavirus relief bill.

Here are some questions and answers:

What happens next if Trump doesn’t sign the spending bill into law?

Funding for unemployment checks for millions of Americans is set to expire on Saturday, and the federal government faces the possibility of a shutdown if the bill is not passed into law by Tuesday.

The House was previously slated to reconvene on Monday, and the Senate on Tuesday, so Congress could always attempt to approve a temporary stopgap measure to keep the federal government afloat. But the funding for coronavirus relief, including money for unemployment, would be frozen.

Suozzi said even if Trump decides to veto the spending bill, it passed both chambers of Congress with veto-proof majorities. The Democratic-controlled House and Republican-controlled Senate would likely vote to override Trump’s veto, he said.

Trump could also simply decide not to sign the bill. If the president doesn't act on a bill within 10 days of it being presented to his desk, it becomes law. But, there’s a hiccup in the timing of the current bill. The 5,000-plus-page bill won’t actually be presented to the White House for Trump’s signature until Friday, under a process known as enrollment, that would put the 10-day period past Jan. 3, when the current Congress expires and newly elected lawmakers are sworn in. Under federal law, Congress would then need to revote on the bill.

How likely is Congress to increase the amount in each stimulus check?

Congressional Democrats, who have long been pushing for an increase in the amount provided for direct payments, seized on Trump’s video to introduce an amendment in the U.S. House late Tuesday calling for $2,000 payments for individuals and $4,000 for couples.

Congressional Republicans, who have long raised concerns about the size of the coronavirus relief packages, have balked at any increases beyond the $600 for individuals and $1,200 for couples advocated by Mnuchin.

Suozzi said he supported increasing the amount but added that it was unlikely the Republican-controlled Senate would sign off on the increases demanded by Trump after months of resisting calls for at least $1,200 in individual payments.

"I just don’t believe that it is genuine … if they want to do it, I will support it," Suozzi said in a call with reporters. "I don’t think there is any way the conservative supporters of the president would ever support $2,000 checks."

How will the delay impact the distribution of stimulus checks and other aid?

Mnuchin on Monday said checks could start going out as early as "next week," but lawmakers said that timeline seems unlikely if Trump doesn’t sign the current COVID-19 relief bill by Friday.

The language of the bill gives the Treasury Department until Jan. 15 to start distributing money to eligible Americans.

An aide to Senate Minority Leader Chuck Schumer (D-N.Y.) said money in the relief bill for hospitals, mass transit systems and schools would be ready to be distributed "immediately" once the bill is signed.