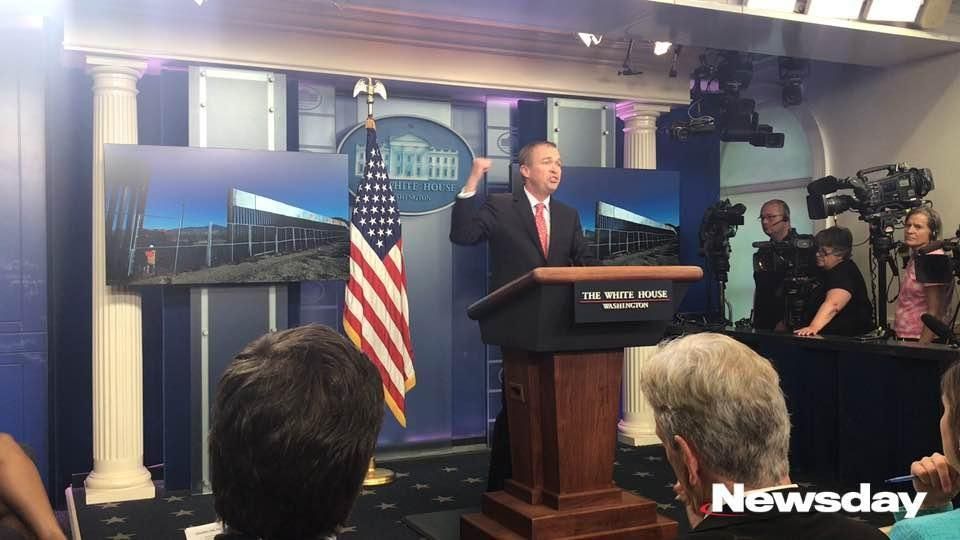 Trump administration officials said the spending bill being considered in Congress includes gains for the White House, specifically increased funds for border security and money to replace existing border wall. They added that Democrats shouldn't declare the bill a victory and spoke from the White House on Tuesday, May 2, 2017. (Credit: Newsday / Emily Ngo)

President Donald Trump, in a pair of tweets Tuesday, lamented that GOP lawmakers had to compromise with Democrats on a bipartisan spending bill and said a “good shutdown” is needed to fix how government operates.

He and his budget director declared the package — likely to pass this week in Congress — as a victory for his agenda, hailing gains in response to what they saw as Democrats’ gloating.

“The president is frustrated with the fact that he negotiated in good faith with the Democrats, and they went out to try and spike the football and make him look bad,” White House budget director Mick Mulvaney told reporters in a heated defense of the military and border-security funding in the bill.

In addition to a shutdown, Trump called for scrapping the filibuster threshold the Democrats used earlier this year to slow the confirmation of Supreme Court Justice Neil Gorsuch.

“The reason for the plan negotiated between the Republicans and Democrats is that we need 60 votes in the Senate which are not there!” he tweeted. “We either elect more Republican Senators in 2018 or change the rules now to 51%. Our country needs a good ‘shutdown’ in September to fix mess!”

Trump, Mulvaney and others in the administration spoke out as Capitol Hill lawmakers prepared to vote on a $1 trillion bipartisan spending package that would avert a government shutdown until at least Oct. 1, the start of the next budget year.

Senate Minority Leader Chuck Schumer (D-N.Y.) said Trump’s call for a shutdown is a “very, very bad idea because it would hurt so many average folks.”

Schumer has celebrated the spending bill as a hard-fought deal across the aisle and an example of “working together in the best traditions of the Senate,” but he effectively said Trump lost out.

“We had a strategy and it worked,” he told The Washington Post. “Democrats and Republicans in the House and Senate were closer to one another than Republicans were to Donald Trump.”

In the bill, Republicans were forced to concede funding for construction of the border wall — which some in the GOP oppose — and take off the table cuts that Trump wanted to domestic programs such as the Environmental Protection Agency.

But they did secure funding for several priorities.

The president touted the increased military spending and said the GOP notched an additional victory by breaking the so-called parity rule giving Democrats $1 in non-defense spending for every Republican dollar of defense spending.

“Our Republican team had its own victory under the radar. . . . And we didn’t do any touting like the Democrats did, by the way,” he said at an unrelated White House event.

Secretary of Homeland Security John Kelly later added: “As promised, the budget will secure our borders and enforce our immigration laws.”

Mulvaney said the bill has funds for levee walls at the border and replacement of existing sections of border wall.

“There is money in this deal to build several hundreds of millions of dollars of this to replace this,” he said, pointing animatedly to images of a see-through steel wall. “That’s what we got in this deal, and that’s what the Democrats don’t want you to know.”

Mulvaney said it was Democrats who wanted a shutdown.

“They were desperate to make this administration look like we couldn’t function, like we couldn’t govern,” he said. “You’ve got a president who knows what he’s doing when it comes to running the country . . . and I think the message that we’re sending is that we are competent.”