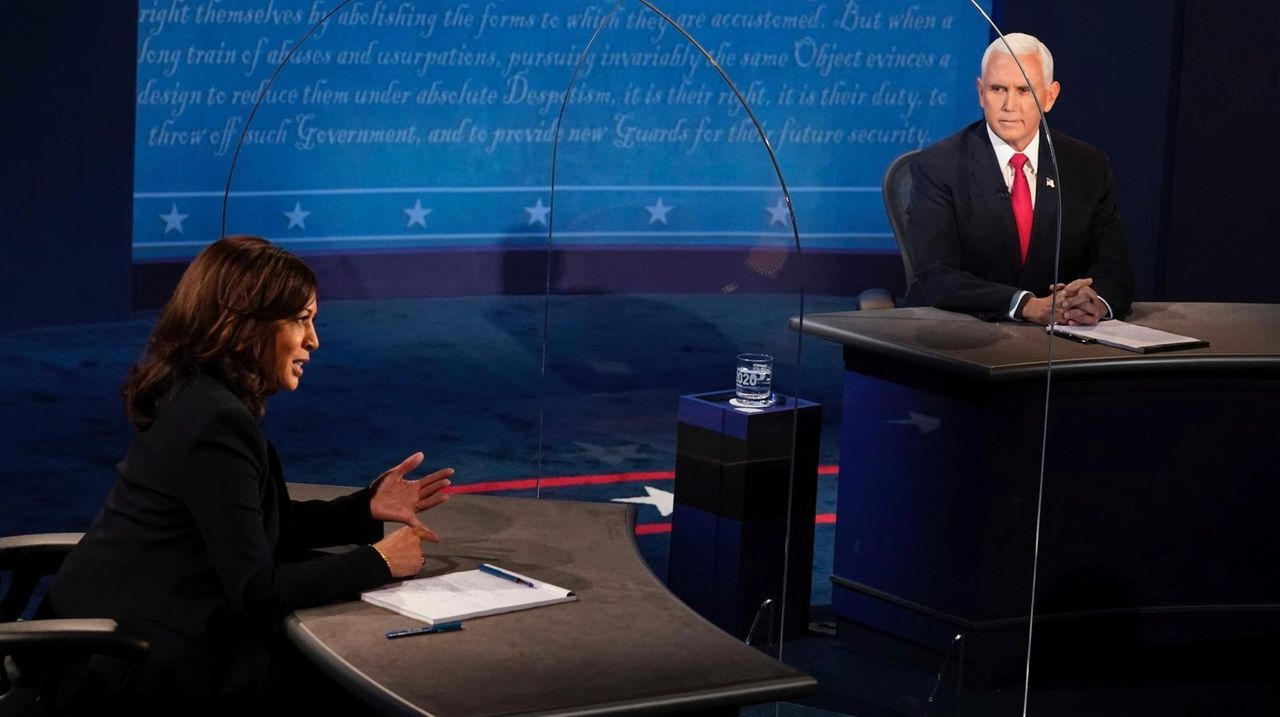 SALT LAKE CITY — Trading barbs through plexiglass shields, Republican Mike Pence and Democrat Kamala Harris turned the only vice presidential debate of 2020 into a dissection of the Trump administration's handling of the coronavirus pandemic, with Harris labeling it "the greatest failure of any presidential administration."

Pence, who leads the president's coronavirus task force, acknowledged that "our nation's gone through a very challenging time this year" yet vigorously defended the administration's overall response to a pandemic that has killed 210,000 Americans.

The meeting, which was far more civil than last week's chaotic faceoff between President Donald Trump and Democrat Joe Biden, unfolded against an outbreak of coronavirus now hitting the highest levels of the U.S. government. Trump spent three days at the hospital before returning to the White House on Monday, and more than a dozen White House and Pentagon officials are also infected, forcing even more into quarantine.

With less than four weeks before Election Day, the debate was one of the final opportunities for Trump and Pence to reset a contest that could be slipping away. They're hoping to move the campaign's focus away from the virus, but the president's infection — and his downplaying of the consequences — are making that challenging.

Voters' guide: See the candidates who will be on your ballot

Trump and Biden are scheduled to debate again on Oct. 15, though the status of that meeting is unclear. The president has said he wants to attend, but Biden says it shouldn't move forward if Trump still has coronavirus.

Republicans want to cast the race as a choice between two candidates fighting to move the country in vastly different directions. Biden and Harris, they say, would pursue a far-left agenda bordering on socialism; the Democrats say Trump's administration will stoke racial and other divides, torpedo health care for people who aren't wealthy and otherwise undercut national strength.

Harris, 55, made history by becoming the first Black woman to participate in a vice presidential debate. She condemned the police killings of Breonna Taylor in Kentucky and George Floyd in Minnesota and spoke about the protests against racial injustice in policing that followed, which Trump has portrayed as "riots" as he calls for law and order.

"We are never going to condone violence, but we must always fight for the values that we hold dear," Harris said. "I'm a former career prosecutor. I know what I'm talking about. Bad cops are bad for good cops."

Pence, 61, said his heart breaks for Taylor's family but he trusts the U.S. justice system. He called it "remarkable" that Harris, as a former attorney general and prosecutor, would question the grand jury's decision in the case not to charge an officer with killing her.

He also pushed back against the existence of systemic racism in police departments and rejected the idea that law enforcement officers have a bias against minorities.

"I want everyone to know who puts on the uniform of law enforcement every day, President Trump and I stand with you," Pence said. "We don't have to choose between supporting law enforcement, proving public safety and supporting our African American neighbors."

The candidates also clashed on taxes — or specifically, Trump's refusal to release his tax returns four years after repeatedly promising to do so. The New York Times reported last month that the president pays very little personal income tax but owes hundreds of millions of dollars in debt.

"It'd be really good to know who the president owes money to," Harris said.

"The one thing we know about Joe, he puts it all out there. He is honest, he is forthright," she added. "Donald Trump, on the other hand, has been about covering up everything."

Pence defended Trump as a job creator who has paid more than his fair share of taxes and shifted toward Biden: "On Day One, Joe Biden's going to raise your taxes."

Pence refused to say whether climate change was an existential threat or whether Trump would accept the election results should he lose, while Harris declined to say whether Biden would push to expand the number of justices on the Supreme Court.

But so long as the coronavirus is ravaging the White House and killing several hundred Americans each day, the campaign will almost certainly be a referendum on the Trump administration's inability to control the pandemic, which Republicans have sought to downplay or ignore altogether for several months.

Pence's effort to focus on other topics was undercut by the mere fact that the candidates and moderator were separated by plexiglass shields, seated more than 12 feet apart and facing a crowd of masked audience members who faced expulsion if they removed their face coverings. The candidates on stage revealed test results earlier in the day proving they were not infected.

While the audience was forced to wear face masks throughout, second lady Karen Pence removed her mask as she joined her husband on stage at the end of the debate.

Though the night was about Pence and Harris, the men at the top of the ticket also made their presence known. 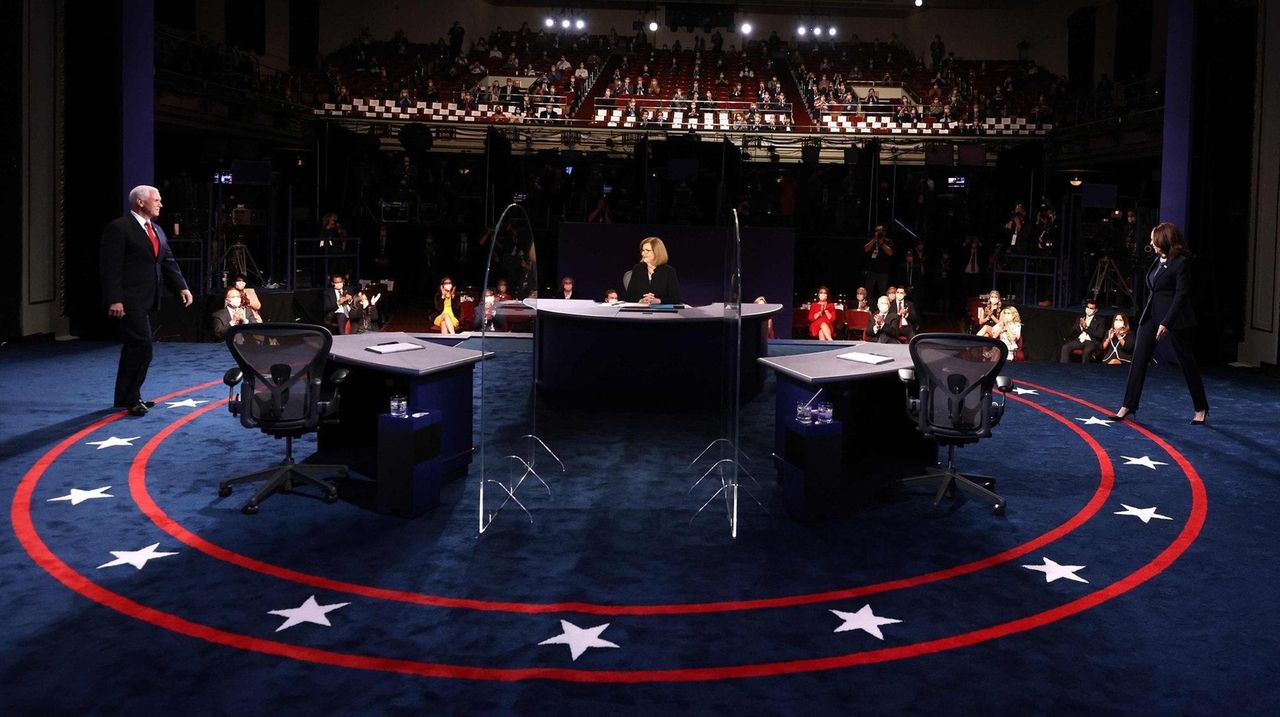 Trump released a video just three hours before the debate calling his diagnosis "a blessing in disguise" because it shed light on an experimental antibody combination that he credited for his improved condition — though neither he nor his doctors have a way of knowing whether the drug had that effect.

He tweeted several times during the debate, offering this assessment at one point: "Mike Pence is doing GREAT! She is a gaffe machine."

Biden too kept a stream of tweets going; he posted his plans for confronting the virus, shared clips from the debate exchanges and praised Harris, who he said "is showing the American people why I chose her as my running mate."

VP debate takeaways: Pandemic, more civility — and a flyThe opening of Wednesday's undercard matchup made clear that Pence and Harris were set for a much different encounter: an actual debate.