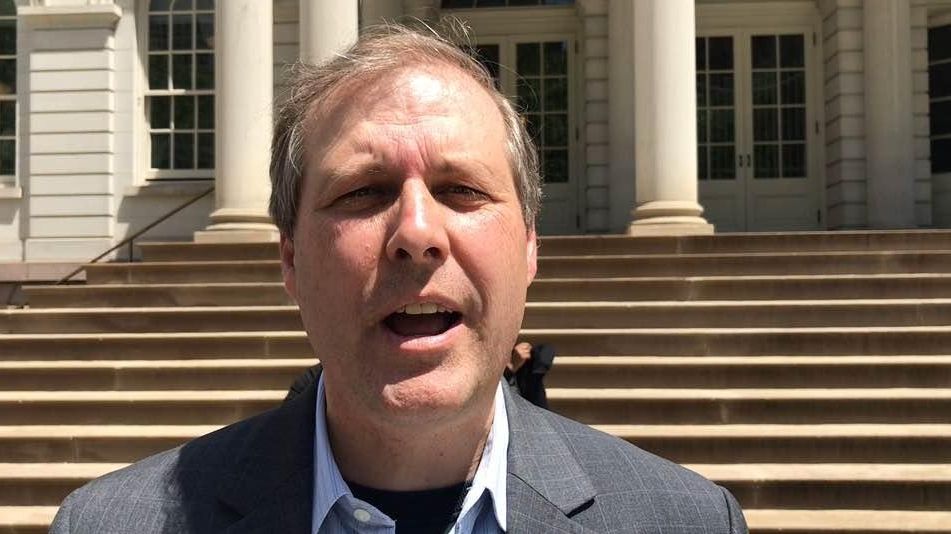 Activists outside New York City Hall criticize a bill passed by the state Senate, saying the legislation's definition of a gang member is too vague. (Credit: Newsday / Matthew Chayes)

Activists said Tuesday that innocent people are at risk of being unfairly designated as gang members and harshly punished under current NYPD policy and legislation passed by the State Senate after MS-13-linked killings in Central Islip.

Speaking in front of New York City Hall, the activists objected to the legislation, passed in the aftermath of the quadruple homicide, that creates stronger felonies for certain acts.

“The definition of what constitutes a gang is incredibly vague. It could include, basically, a Little-League baseball team,” said Alex S. Vitale, coordinator of the Policing and Social Justice Project at Brooklyn College.

The legislation states that “any formal or informal association . . . of two or more individuals identified by a common name, sign, dress, symbols, tattoos, or other mark or markings” and “a pattern of criminal street gang activity,” subjects a person to increased penalties after two or more offenses are committed over a period of years.

Among the dozens of felony offenses listed in the legislation are some forms of assault, menacing, criminal mischief, reckless endangerment, strangulation, sex crimes and murder.

Asked about the activists’ concerns, Scott Reif, a spokesman for state Senate Majority Leader John Flanagan (R-East Northport) disputed that a sports team would be covered by the law. In order for a group to be covered by the bill, “they have to be engaged in criminal activity” and further the group’s aims. He said the bill backers’ intention is “to crack down on the rise of gang violence, particularly on Long Island with MS-13.”

U.S. Attorney General Jeff Sessions came to Central Islip after the killings and met with parents of the victims and promised to “demolish” the gang.

Assembly Speaker Carl Heastie (D-Bronx) seemed disinclined to pass the bill, saying earlier this month that “increased penalties are not necessarily a deterrent.”

The activists at City Hall Tuesday also said the NYPD is opaque with how a person is designated a gang member in police databases.

“People, under the label of ‘gangs’ are being thrown under the bus,” said Josmar Trujillo, an organizer behind the City Hall event. The activists sent a letter to NYPD inspector general Phil Eure, asking him to probe questions such as how a person is put in its gang database, how a person can challenge placement and how social media like Facebook and Instagram are used to collect intelligence.

The activists claim people are being designated gang affiliates, unfairly, based in large part on rantings on social media.

Asked for the answers to these questions, the NYPD’s press office sent an audio file dated Tuesday in which Police Commissioner James O’Neill said there were about 100 “gang takedowns” last year involving the arrests of about 1,000 people, “all of them involved in violence and crime.”

O’Neill said in the audio file from an earlier event that “we are targeting the right people.”

A spokeswoman for the NYPD inspector general, Nicole Turso, said his office “is aware of the letter” and declined to comment.