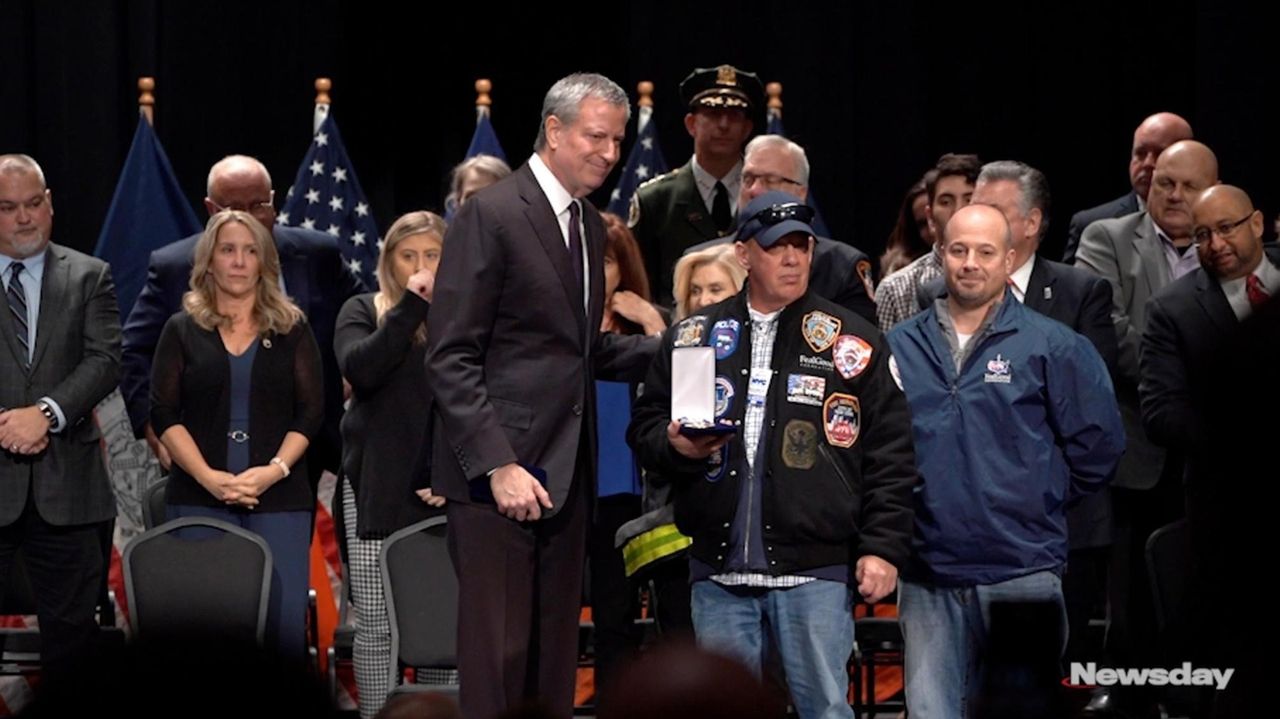 For their tireless efforts that eventually resulted in lifelong health care and compensation for those who fell ill at Ground Zero, 18 New Yorkers received the city’s Bronze Medallion on Monday in a morning ceremony at Broadway’s historic Beacon Theatre.

Mayor Bill de Blasio handed out the awards, which recognized the first responders and volunteers — still ailing from working on the World Trade Center after the 9/11 terrorist attacks — for convincing Congress to renew the Sept. 11 Victims Compensation Fund through 2092.

The bronze medallions, the highest honor bestowed by the city recognizes “outstanding achievement.” The mayor praised the families and their loved one’s who died while the protracted fight to get the funding renewed continued over 10 years.

“We’re here to honor today those who sustained this fight,” de Blasio said, “those who believed that we could not give up.”

The mayor also acknowledged the collective lobbying of nonprofit groups, the New York Congressional Delegation and city unions whose “kindness and courage reminded the nation that you can’t just give lip service to those that serve.’’

The event included solemn benedictions, an emotional rendition of “Amazing Grace,” and a bagpipe and drum performance by members of the city’s uniformed departments.

Monsignor Robert Thelen, a chaplain for the city Department of Sanitation, described those honored as a “righteous community … fighting for decency and fairness. “It’s a bitter sweet moment.’’

A moment of silence paid tribute to those who have died of 9/11-related illnesses. A standing ovation met the announcement of awards for posthumous recipients that included FDNY firefighter Ray Pfiefer, FDNY Paramedic Deborah Reeve, and NYPD detectives James Zadroga and Luis Alvarez.

Alaine Alvarez, the wife of Luis Alvarez, said after Monday’s ceremony: “I am in awe that all these people came together to make this happen.”

A resident of Oceanside, Luiz Alvarez, 53, died in June, shortly after his congressional testimony with activist and comedian Jon Stewart that many considered pivotal in convincing lawmakers to renew the fund.

“Today, I never take a day for granted,” Alvarez said. “I will spend it making sure that other families get the support and help they need.’’

“They were the rock that led and provided the research,” Maloney said. “They are a big part of our victory.’’

September 11, 2001 was “the worse day — most sorrowful day,’’ said medallion recipient Rep. Pete King (R-Seaford). The country came together after the attacks, King added, “but New York is a different breed. We have guts and the rest of the nation saw that. … Those who suffered did not die in vain.’’

Other recipients included Ben Chevat, executive director of 9/11 Health Watch and Kimberly Flynn, director of 9/11 Environmental Action and a 9/11 children’s advocate. Another honoree, Lila Nordstrom, founded StuyHealth to encourage former students at Stuyvesant High School like herself to have a doctor check for 9/11-related illnesses. The high school is located about five blocks north of the World Trade Center.

In the audience, Bertha Merriweather of Bay Shore, whose son Tommy, an NYPD detective, died of pancreatic cancer at 48, said she continues assisting those who are ill.

“There are lots more people out there who worked Ground Zero who need our help, sick in their beds, too sick to travel … there is still so much more to be done,’’ said Merriweather, of the Helping Our Post 9/11 Survivors.