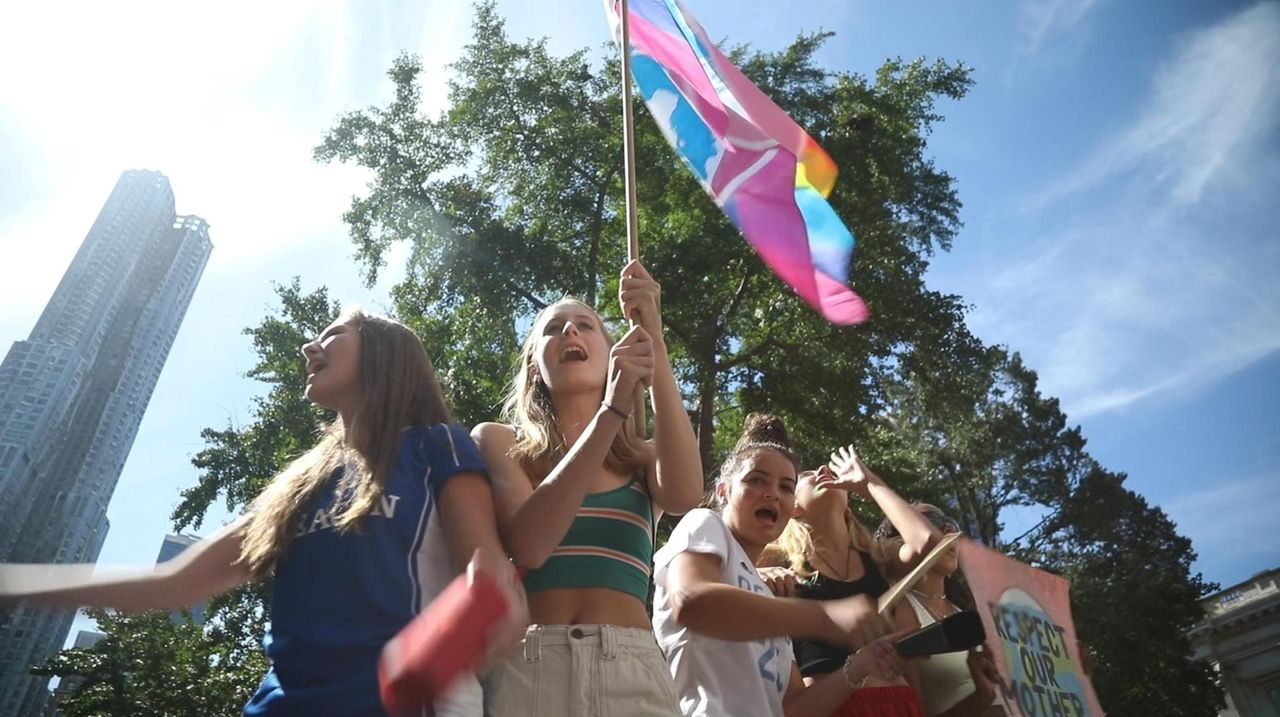 Tens of thousands of youths crowded lower Manhattan on Friday, joining an international demonstration to demand economic transformation to address climate change and avert what attendees warned could be imminent doom.

Celebrity teen activist Greta Thunberg, 16, the Swedish viral sensation who’s been touring the globe to draw attention to the cause, addressed a crowd in Battery Park to chants of “Greta! Greta! Greta!” and estimated the head count in New York City to be 250,000, and 4 million worldwide.

“We will do everything in our power to stop the crisis from getting worse — even if it means skipping school or work — because this is more important,” she said, adding: “Why should we study for a future that is being taken away from us?”

Her speech capped a day of demonstrating, by youths and adults, that led the NYPD to close much of Broadway in lower Manhattan and drew younger children to the city with their parents and teens alone with friends.

'There is no Planet B': LI students seek action on climate change

Greta said of world leaders: “The empty promises are the same … The lies are the same. And the inaction is the same. Nowhere have I found anyone in power who dares to tell it like it is.”

New York City’s demonstration, the movement’s premier event, coincided with sister ones around the world, including across the United States, in London, Madrid, Santiago and Sydney.

Called “Climate Strike NYC,” the demonstration was timed to predate Monday’s United Nations Climate Action Summit 2019, whose website says is intended to “spark the transformation that is urgently needed and propel action that will benefit everyone.”

Thousands of school-age children heeded Mayor Bill de Blasio’s official blessing to skip school in order to attend — on WNYC radio before the rally he added that “the youth leadership is going to be one of the reasons why this planet gets saved” — provided a child has parental permission.

De Blasio, City Council Speaker Corey Johnson and other politicians participated in the demonstration but were not among the featured speakers.

Some signs sought modest lifestyle changes; others demanded changes such as an end to capitalism and the adoption of veganism.

The day's events lasted hours — and participants began pouring into lower Manhattan late in the morning. At St. Paul’s Chapel of Trinity Church, demonstrators prepared to march, eating a continental breakfast, making signs on the sanctuary floor, and pausing for a moment of silence led by an episcopal priest.

Inside the church, Lukas Wenninger, 24, who just moved to Hell’s Kitchen in Manhattan from a town outside of Vienna, said he wanted fewer fossil fuels and more renewable energy used.

“We’ve only got one Earth and we can’t mess around with our Earth with the climate warming,” said Wenninger, who works for a nongovernmental organization in the city.

Among the demands of Friday’s demonstration, according to its Eventbrite page: an end to the use of fossil fuels; the exclusion of "big polluters from decision-making spaces," as well as "reparations" from polluters by forcing them to pay “for climate damages and investing in a just transition to renewable energy" and "globally equitable climate solutions in the transition to a 100% renewable economy."

According to the NASA website: “Scientific evidence for warming of the climate system is unequivocal.”

Demonstrators mustered in City Hall Park, a few blocks north in Foley Square, and then down Broadway to the Battery.

As thousands crammed the street, a group of girls stood on garbage bins: "Hey, hey, ho-ho, climate change has got to go!" as one sounded a cowbell. A young man hoisted himself to statuary on the old surrogates court.

John Lieberman, who is 13 and in 8th grade, held a sign in Battery Park with his sister, Alex, 11 and in 6th grade, saying: "#METOO SAID MOTHER EARTH."

Alex said the sign combines the women’s and environmentalism movements.

“She’s being violated,” John said of Mother Earth, “by humans — us.”

Musician Willow Smith and her brother Jaden Smith performed during a free afternoon concert. The pair, the children of actors Jada Pinkett Smith and Will Smith, were interspersing songs with “change the world!” and “heal the earth!”

Emelia Robie, 9, a fifth-grader from Maplewood, New Jersey, rode the train to Manhattan to attend with her mom, who signed the youngster out of school.

"THERE IS NO PLANET B," read the sign she made with pastels. "LET'S SAVE PLANET A.”

“It means that there’s no extra planet we can go to survive on,” she said, “so we have to stick to this planet and make it better.”

Her wish list: Less consumption. Less plastic. Energy that comes from sources other than fossil fuels.

Emelia said she also hoped to wear clothing with a political message tied to the protest, but the one the family ordered was too big.

What are your climate change hopes ahead of the UN summit?The United Nations Climate Action Summit is on Monday. What are your worries about climate change? What do you think will result from the summit? Long Islanders join climate strike in ManhattanAbout a half-dozen people from Mothers Out Front LI traveled to Manhattan for the climate strike. Driving to NYC for climate strike? Think againIn addition to the usual roadwork closures, officials said Broadway will be closed from north of City Hall Park at Duane Street south to the Battery for the protest.