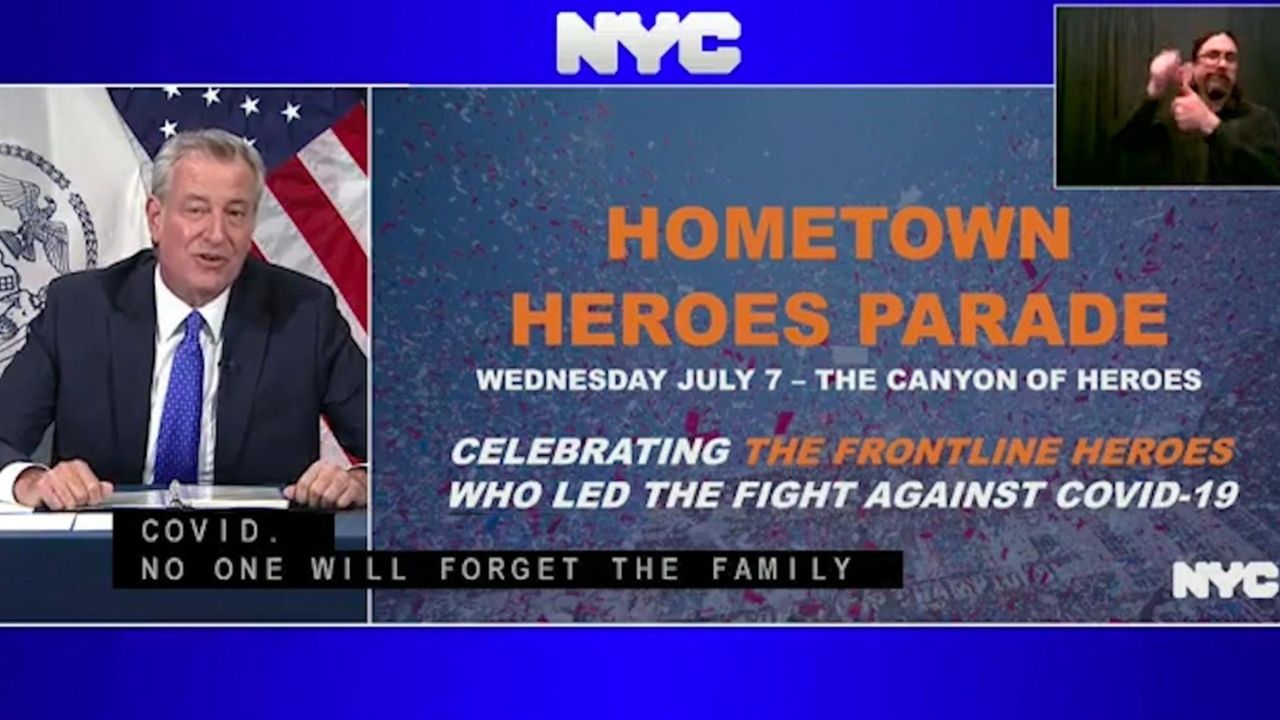 On Monday, Mayor Bill de Blasio announced that on that on July 7 there will be a ticker-tape parade to honor pandemic responders. Credit: New York City Mayor's Office

New York City will host a ticker-tape parade next month through lower Manhattan’s historic Canyon of Heroes to thank the tens of thousands of first responders, essential workers and others who provided care and comfort throughout the pandemic, Mayor Bill de Blasio announced Monday.

The city’s "Hometown Heroes Parade" will take place at 11 a.m. on July 7. According to de Blasio, it will make good on his promise in April 2020 that when the city emerged from the pandemic — as it is on the verge of doing — "the heroes who led the fight against COVID-19 [would have] a celebration like our city had never seen."

Details were lacking about the numbers of participants expected and whether any special guests and celebrities would attend.

But at his daily City Hall news briefing, de Blasio said that every kind of essential worker — health care personnel, emergency food providers, first responders, educators, municipal workers, transportation and utility workers, as well as bodega employees and delivery people — would be honored and be able to participate on special floats.

"The first true large parade in New York City will be one to celebrate the heroes of the fight against COVID — our health care heroes, who were extraordinary and need to be remembered for the ages, our first responders, our essential workers — the people who kept us alive, the people who kept the city going no matter what," de Blasio said.

The route is expected to follow that of past parades, starting at Battery Park and proceeding north up Broadway to the City Hall area for a ceremony.

The parade would be the first ticker-tape extravaganza in the city since 2019, when the U.S. women’s soccer team was honored for winning the World Cup. The team was similarly honored with a parade for its 2015 World Cup victory. In 2012, the New York Giants were cheered in their parade after winning Super Bowl XLVI with a victory over the New England Patriots.

The "Hometown Heroes Parade" will be the latest in a long tradition that began in 1886 when, historians tell us, Manhattan office workers along Wall Street spontaneously threw ticker tape during a parade for the dedication of the Statue of Liberty.

Other parades took place over the ensuing decades to mark various occasions: military victories, visits by royalty, major sports wins as well as papal and presidential visits. Singular acts of bravery and daring were also celebrated, such as Charles A. Lindbergh’s solo flight across the Atlantic Ocean in 1927.