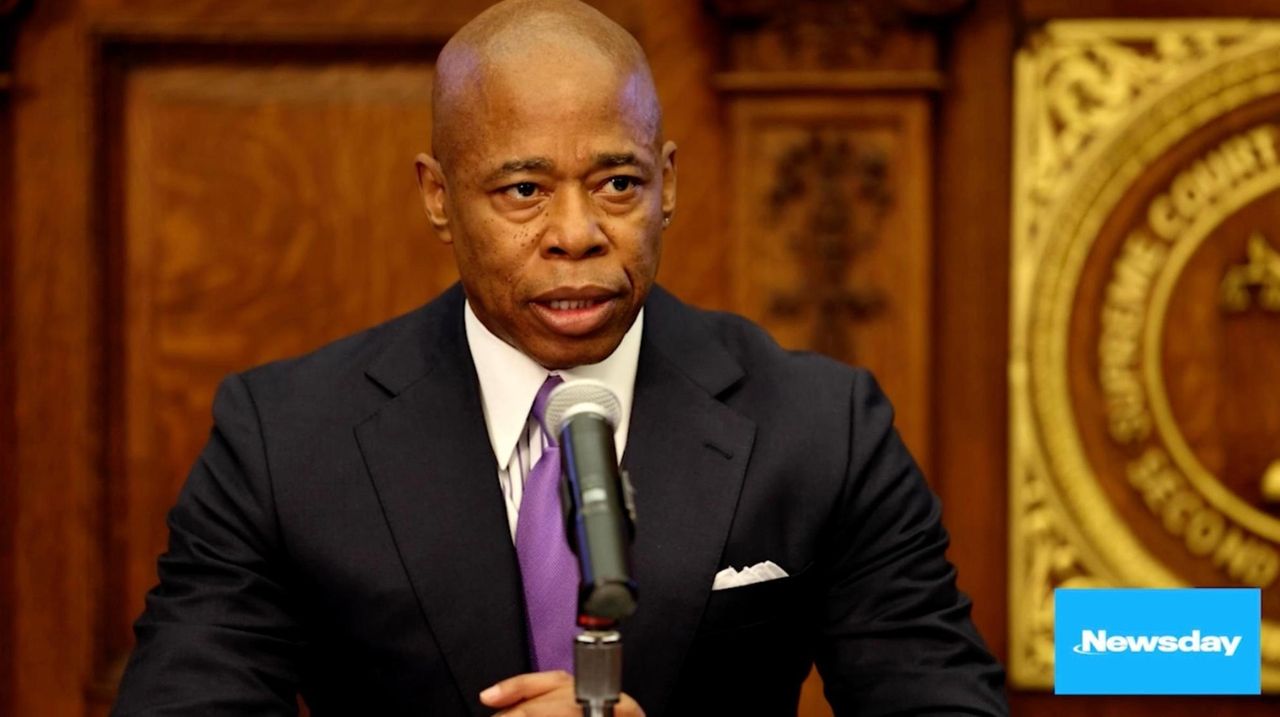 NYC Mayor-elect Eric Adams spoke about making a smooth transition into the new administration with an outline for his 2022 COVID-19 plan. Credit: Corey Sipkin

De Blasio started the mandate for the city's public employees beginning late in the summer, expanded it to the rest of the municipal workforce over the following months and imposed it, starting Dec. 27, on private employers. Adams said he supports his soon-to-be-predecessor's approach.

"Yes, we will fine those businesses that are recklessly not complying and just refuse to do so, and we're going to use a light-handed approach," Adams said.

De Blasio has said that those who won't be vaccinated should be told to work from home if possible. He also has said an employer can put the employee on unpaid leave. He hasn't said whether the person must be fired eventually.

Adams is also considering whether to require booster shots in order to be considered "fully vaccinated" and comply with the city's rules for entering most indoor venues including gyms, restaurants and bars, and in some cases, to maintain employment, said the health commissioner, Dr. Dave Chokshi, at a news conference with Adams at Brooklyn Borough Hall.

In an apparent break with de Blasio, Adams is considering whether to require schoolchildren to be vaccinated against COVID-19, said Chokshi, who is staying on in the Adams administration for three months during the transition. That decision would be made by spring and implemented by the fall.

But Adams said he didn't see a need for such a mandate currently, as transmission in the schools has been far lower than nearly everywhere else. Such a mandate would need to be set by the state, and Adams said his team had been in touch with the governor.

Adams foresees a time when mandates, such as masking for schoolchildren, would be lessened or rescinded — or increased, depending on new variants, he said.

Noting that mobile morgue trucks are no longer outside hospitals, as was the case during the early months of the pandemic when hundreds a day were dying of the virus just in the city, Adams said, "We’re at the point where we must safely learn to live with COVID."

He added: "Yes, the numbers are high. Yes, there are a lot of people who are getting COVID. We want to stop that from happening. But the outcome is far different from what we saw in the past."

Meanwhile, at a news conference about the Times Square New Year's Eve preparations, outgoing NYPD Commissioner Dermot Shea said the police force has the highest sick rate, 21%, he's ever seen, compared with the 19.8% recorded in March 2020. The normal sick rate for cops is between 3% and 4%.

"The good news is, it feels very different today than it was last year during the spring of 2020; when you look at the hospitalization rates, there is really literally no comparison," Shea said.

With the cancellation of days off, Shea said, the department is in good shape to handle not only the New Year's Eve festivities but all other policing needs for the rest of the city.

De Blasio told NBC’s "Today" show that he did not plan to cancel the public event at Times Square for New Year's Eve, as happened last year.

Later, at City Hall for the last news conference of his mayoralty, de Blasio said that although the number of hospitalized youths has risen, "what’s been telling to us, thank God, is how few kids are having a problem first and foremost because of COVID, and how relatively mild their experience has been."

However, Dr. Mitch Katz, the head of the city’s public hospitals and health clinics, called the major increases in hospitalization, in children and adults, "very frightening."

Bellone vetoes Democratic redistricting plan
1:19
Baby, parents reunited with Suffolk cop who helped with unexpected delivery
NY warns of 'scammers' offering COVID-19 kits for personal info
Wake for slain NYPD Officer to be held today
Long Island educator for decades dies at 92
Masking in LI schools: What happens next
Didn’t find what you were looking for?