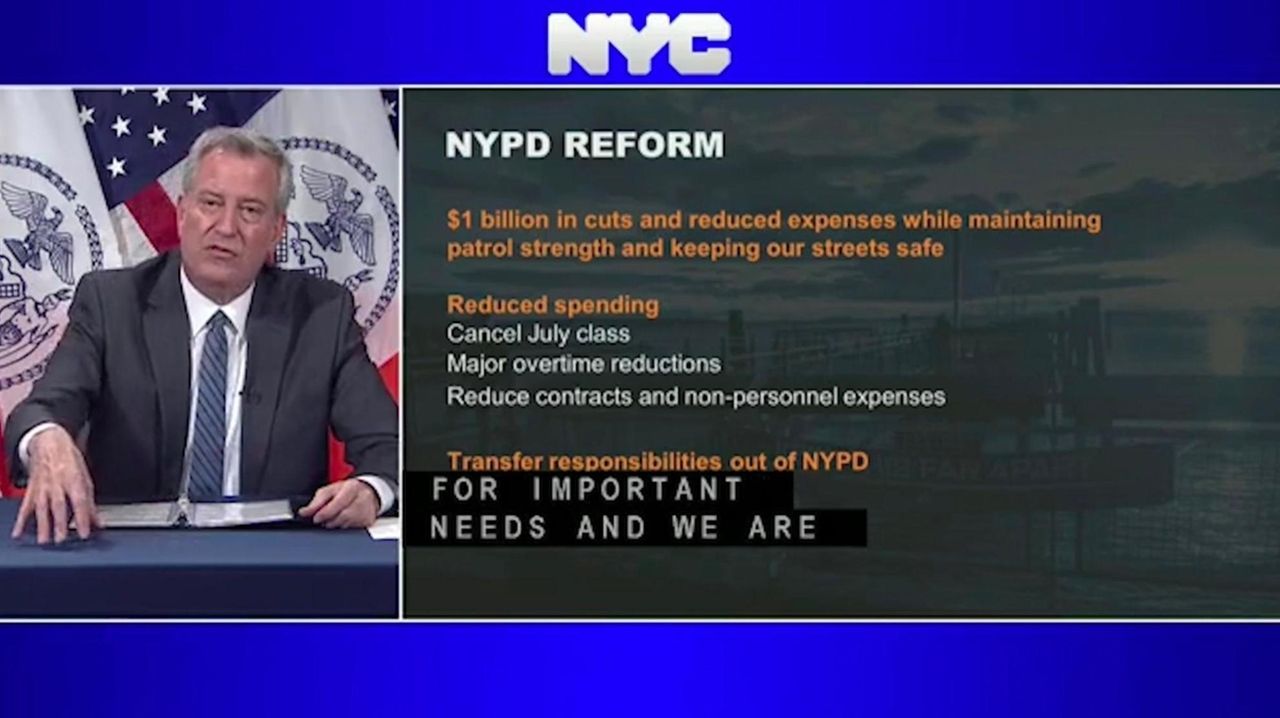 Mayor Bill de Blasio said on Tuesday that the NYPD is losing more than $1 billion in funding, including canceling the July class of recruits and major overtime reductions with the money being transferred to social welfare programs, after widespread demands for police reform. Credit: NY Mayor's Office

The NYPD is losing $1.5 billion in funding — including canceling the July recruit class, cutting overtime and abandoning a plan for a new precinct — with the money redistributed to social-welfare programs, in the fallout from the George Floyd protests, according to Mayor Bill de Blasio Tuesday.

By year’s end, the department headcount will decline to an estimated 34,837 from about 36,000, with the patrol force supplemented by reassigning cops now doing desk jobs, de Blasio said, promising the budget cuts wouldn’t jeopardize public safety.

Several of the groups that have been protesting accused de Blasio of fiscal tricks that fail to force true cuts to policing.

De Blasio's own former deputy mayor, Richard Buery, tweeted: “This budget is BS. These aren’t real cuts to the NYPD.”

Among the “NYPD reinvestments:” from the police operating budget, $115 million for summer youth programs; $116 million for education; $134 million for family and social services; from the capital budget, $450 million for public housing and parks facilities; and $67 million for broadband internet in the city’s housing projects, according to a slideat de Blasio’s daily news conference.

“Our young people need to be reached. Not policed, reached,” he said.

The NYPD operating budget is about $6 billion annually, the source of most of the cuts. The police budget is even more when factoring in its capital budget, which covers facilities, vehicles and more.

Still, the next police academy class begins in October, and the curbing of overtime won’t affect emergencies, he said.

“Look, we’re gonna have some exceptional moments, and we’re gonna have to deal with those unto themselves,” he said. “What we’re talking about is the kind of overtime that is normally relied upon.”

De Blasio’s budget czar, Melanie Hartzog, said cops’ overtime was originally planned for $523 million, but it's been cut by $296 million in the upcoming budget.

In the first two weeks alone of the Floyd protests, the city spent about $115 million on police overtime, which is more than four times the amount spent in the same period in 2019.

The total municipal budget de Blasio is proposing for the upcoming fiscal year — which starts Wednesday — is $88.1 billion. After hours of proceedings on Zoom that started late Tuesday, the City Council passed the budget at 12:33 a.m. on Wednesday morning.

The budget is less than the $95 billion he proposed earlier this year, before the coronavirus pandemic devastated city tax coffers. Already, the city has lost $9 billion in revenue, he said.

For more than a week, there’s been an encampment of hundreds outside New York City Hall — where de Blasio works — demanding at least $1 billion in NYPD cuts.

Like more than 140 places in the United States, the city has been the site of protests demanding changes to policing, since the May 25 bystander-recorded death of Floyd while a cop in Minneapolis knelt on his neck for almost nine minutes.

De Blasio said of the cuts announced Tuesday: "it’s also about change, it’s also about progress, it’s about ensuring that we act in the spirit of social justice. I hear the voices all over the city, calling for justice."

On Tuesday at his news conference, de Blasio shrugged off criticism from some left-leaning groups who have accused the mayor of playing budgetary shell games — reaching $1 billion in NYPD cuts by, for example, moving crossing guards and school security guards to other municipal agencies.

Also the Police Benevolent Association labor union tweeted a succession of posts about rising shootings in the city and crime victims.