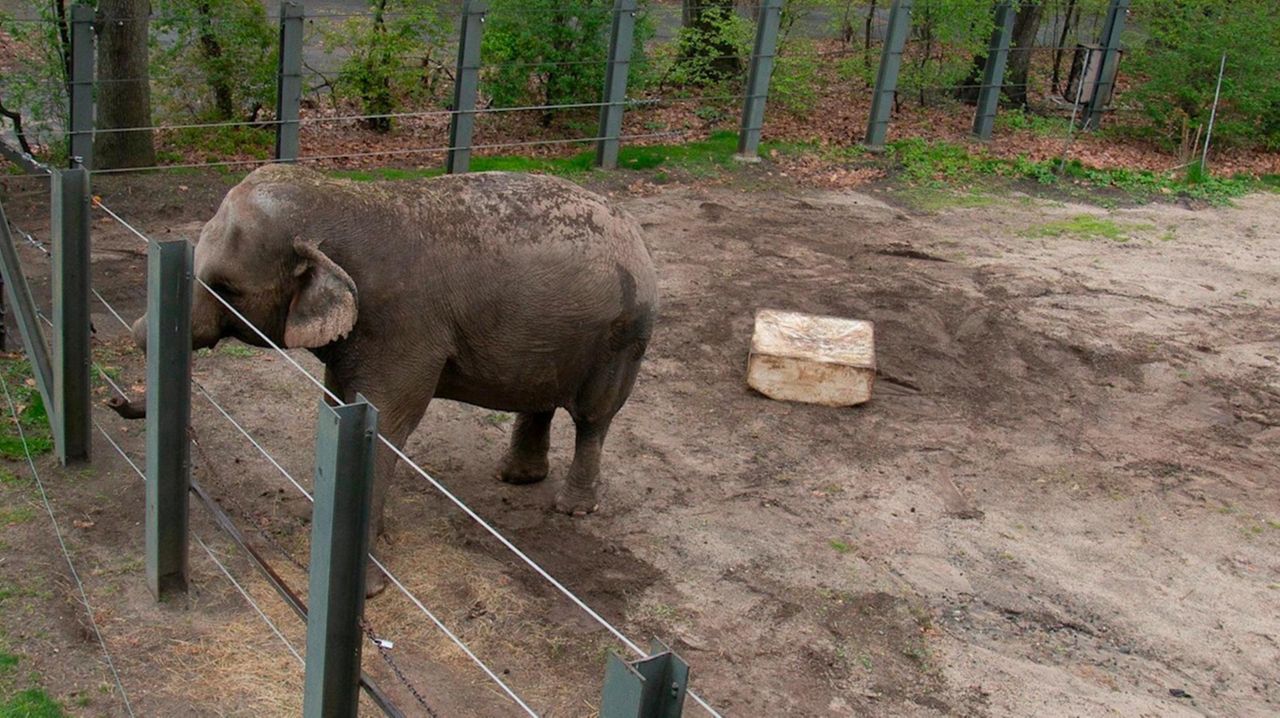 A Long Island attorney has volunteered her time on behalf of an elephant named Happy at the Bronx Zoo. Elizabeth Stein is fighting to have Happy released from the zoo and placed into an animal sanctuary. Newsday's Steve Langford reports. Credit: Howard Schnapp; Change.org; Gigi Glendinning; Photo Credit: AP Photo/Bebeto Matthews

To Elizabeth Stein, one picture tells the story: Happy, the elderly elephant whose freedom she finally hopes to win, stands alone, pressing her trunk against the wire fence encircling her one-acre enclosure at the Bronx Zoo.

"Nobody who cares for Happy would keep her there," said Stein, 66, a Manhasset Hills native.

Stein, a lawyer, now hopes to persuade the state's top court that smart, independent and family-oriented animals like Happy qualify for a writ of habeas corpus, a request to a judge to free someone wrongly imprisoned that dates back to at least England's 1215 Magna Carta.

A ruling in favor of Happy would be an astonishing victory that for years has eluded advocates, who increasingly fault the zoo for failing some residents, noting for example that Gus, a polar bear, swam and dove obsessively in his Central Park tank for years due to his depression.

"Sometimes, it's hard, when you are so close to something, and it's been a really long time … and in the back of your mind, you say 'It's never going to happen' — and it's actually happening," said Stein, whose nonhuman clients have included whales and chimpanzees.

To the Bronx Zoo, Happy, now in her mid-50s, receives "excellent care" and "will continue to do so, along with all animals here at the zoo," said Jim Breheny, director of the Bronx Zoo and executive vice president of Zoos & Aquarium at the Wildlife Conservation Society.

The zoo issued its statement in February 2020 after what by its tally was the 24th judge to reject the case. This week, the zoo declined repeated requests for an interview or photograph.

Opened in 1899, the zoo stresses how its role has evolved from displaying wildlife to conserving it in a popular Animal Planet show.

"Her well-being is assured by our dedicated staff and all the expertise they bring in providing excellent care for her for more than 40 years," Breheny had said.

Happy, she said, in 2006 became the first elephant to demonstrate what scientists call "self-awareness" when she recognized her image in a mirror.

New York’s top court, perhaps early next year, will hear Stein and the zoo's lawyers argue whether Happy should join 28 other elephants, all once held by circuses or zoos, at a 3,060-acre Tennessee sanctuary. Elephants in the wild, experts say, may roam 20 to 30 miles a day.

Joyce Poole — who has studied African elephants for four decades, cofounded and codirects ElephantVoices, a San Francisco nonprofit — is one of more than 50 experts, scientists and lawyers calling for Happy’s release.

Keeping elephants, Poole said, "captive and confined prevents them from engaging in normal, autonomous behavior and can result in the development of arthritis, osteoarthritis, osteomyelitis, boredom and stereotypical behavior."

Said Stein, "Based on everything that I’m reading, we have to look at this differently. We can’t, in deciding whether these nonhuman animals should have the right to be protected by habeas corpus, we cannot say they are not human and do not deserve that right."

The top state court rejects about 95% of the cases it is asked to consider; Stein hopes concerns posed earlier by Associate Judge Eugene M. Fahey, who retires in December, finally will be answered.

Ruling against Stein’s group — which had tried to persuade the court to send two upstate chimps, Tommy and Kiko, who the Nonhuman Rights Project said were held in small cages, to a sanctuary — Fahey in 2018 pointed out the court was not ruling on the merits, which must "eventually" be addressed. He asked: "Can a nonhuman animal be entitled to release from confinement through the writ of habeas corpus? Should such a being be treated as a person or as property, in essence a thing?"