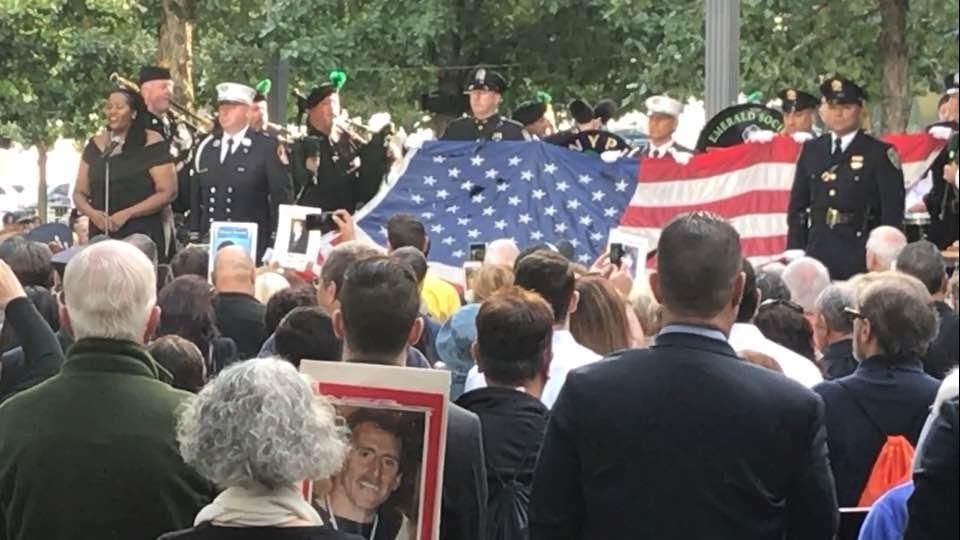 Michael Fox, 60, of Melville was among the mourners who attended the 9/11 memorial ceremony in Lower Manhattan on Monday. He was there to pay tribute to his brother Jeffrey L. Fox who died at the age of 40 when the south tower of the World Trade Center collapsed. (Credit: Newsday/Laura Figueroa)

This story was reported by Matthew Chayes, Alison Fox and Laura Figueroa. It was written by Bart Jones.

Sixteen years after the 9/11 attacks, emotions were still raw Monday as victims’ relatives and public officials gathered in lower Manhattan on the anniversary of the worst terrorism on U.S. soil.

Shortly after 8:46 a.m., the moment when the first plane struck the north tower of the World Trade Center, pairs of relatives began reading the long list of those who were killed, name by name, in alphabetical order.

Bells tolled, marking the moments of the 2001 assault on the two towers and the Pentagon, the crashing of United Airlines Flight 93 in a Pennsylvania field, and the astonishing collapse of the Twin Towers.

As they reached the end of their section of names, the relatives delivered often-emotional messages about the loved ones they had lost.

They choked back tears, gave each other reassuring pats on the back, and in some cases struggled to complete their statements.

“Grammy Ruth, I wish more than anything I could have met you,” one girl said from the podium as she read the names. “I hope you are watching down on me from heaven.”

Mourners in the audience hugged one another, tears streaming down many of their faces as they recalled lives cut short.

Officials and relatives were gathered around the stage to hear the names of the nearly 3,000 of those who died in the 9/11 attacks and in the 1993 World Trade Center bombing.

The reading ended around 12:15 p.m., with buglers playing taps.

St. James resident Patrick McGovern, 62, said he lost his brother, William McGovern, who was a battalion chief with the FDNY.

“It’s actually a little harder now,” he said. “You see the children who never saw their parents. As bad as it was then, it’s worse now.”

“It’s a give-and-take,” he added. “I assured my mother, who is not with us anymore, that I would always be here.”

His brother was in the north tower at the time. “He went in there with Ladder Five and none of them ever came out,” he said.

Despite the somberness of the commemoration, children who had never met the grandparents and aunts and uncles lost on 9/11 offered moments of brightness to the somber day’s events.

Throughout the crowd children could be seen eagerly waving American flags, holding flowers and gently hugging loved ones.

Margie Miller, 67, of Baldwin, said attending the ceremony was her way to give others a glimpse of her late husband, Joel Miller. He worked on the 97th floor of the north tower for the firm Marsh and McLennan.

“I want people to know him for the life that he lived, not just the famous way he died,” Miller said.

She noted that every 9/11 victim was assigned a number following their death. Miller said she wanted her husband to be remembered as more than just a number.

“I always say I need to put a face on P-2714,” Miller said. “It’s not just a name on the wall, that he had lived a life and that he lived on this planet. He breathed and loved and had a family.”

Jimmy Canham, 59, an FDNY lieutenant at the time, was off on Sept. 11, 2001. When he heard about the attacks, he headed into work and was on the 14th floor of the north tower when the south tower fell.

Look back: LIers who lost loved ones reflect on the 10th anniversary of 9/11 Newsday reached out to the families of every Long Islander who lost a loved one on Sept. 11, 2001. This is a compilation of interviews made during the year leading up to Sept. 10, 2011. (Credit: Newsday Staff)

Using an office phone on the 11th floor after helping people evacuate, Canham left a message for his wife: “Baby, I’m not getting out of this. Take care of the boys. I’ll see you on the other side.”

He got out a minute before the north tower fell.

“By the grace of God I got out,” the Carroll Gardens resident recalled. “It’s my second birthday, because I almost died. You mourn for those who couldn’t get out. My heart goes out to those people on the upper floors.”

Marc Merceron, 26, was visiting from France with friends. They came to the memorial a couple days ago, but decided to return on the 9/11 anniversary, he said.

“Today we came to see the ceremony,” he said. “In Europe we are victims of terrorism. A kind of solidarity . . . We were all young when it happened. When I was a child I didn’t understand. And now I understand.

Some visitors to the area were surprised lower Manhattan did not totally shut down for the event.

Adam Jones, 31, a tourist from Chino Hills, California, stood on a pedestrian bridge overlooking the World Trade Center footprints as vehicles rumbled up and down West Street, office workers hurried to their jobs and shoppers ambled to the nearby stores.

He figured there’d be more security, that everything would stop to honor the attacks’ anniversary. “It’s business as usual, I guess,” said Jones, a bus driver.

The morning events were to be followed by Bishop John Barres of the Diocese of Rockville Centre offering the Keynote Meditation during a 6 p.m. prayer service organized by the Permanent Observer Mission of the Holy See to the United Nations for the opening of the 72nd session of the United Nations General Assembly.

In a six-minute meditation, Barres planned to invite attendees to remember the souls of those killed on Sept. 11, 2001. “We draw inspiration from these souls and from the sacrifices that we witnessed on 9/11,” Barres planned to say in prepared remarks, according to the diocese.