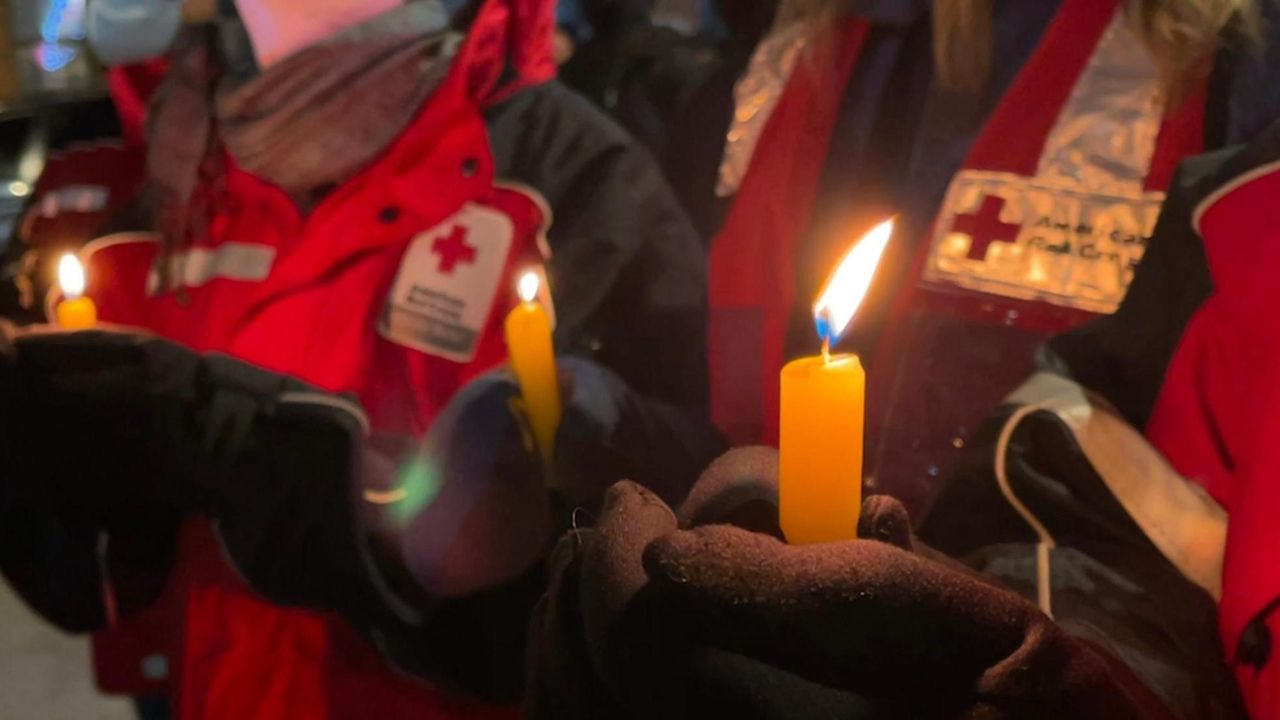 A candlelight vigil was held Tuesday night for the victims of the Bronx fire that killed 17 people on Sunday.  Credit: David Handschuh

A two-year-old boy was among the victims of Sunday’s deadly fire that killed 17 people in the Bronx, according to the NYPD.

The identification of the victims, many of them immigrants from the West African nation of Gambia, came as the community coped with unfathomable loss, memorializing the dead and praying for the survivors' recovery.

Yusupha Jawara was at St. Barnabas Hospital helping to transport the injured when he saw a man pass on a gurney who looked familiar — like his brother, Hagi Jawara.

As the day got later on Sunday, Jawara hadn’t heard from his brother or sister-in-law, Isatou Jabbie, and neither answered the phone, so Jawara started to think more and more about that momentary glance of a man’s partly masked face, whose hair looked hauntingly familiar.

"I was just helping the EMS transport one person to the hospital when I saw him — somebody similar like him — on a stretcher being brought to the ER," Jawara said Tuesday. "At that time, I didn't have the focus to know that it was him."

On Tuesday, the family started to plan their funerals.

The electric space heater that sparked the blaze had been left on for days, a person briefed on the FDNY's investigation said on Tuesday. The person also said that the apartment had multiple space heaters in operation.

A malfunction caused the fire, starting in the bedroom where the heater was being used, with smoke spreading throughout the 19-story building, FDNY Commissioner Daniel Nigro has said.

On Tuesday night, stoic teenagers stood in silence in the frigid cold on East 181st Street, near the site of the building, holding up photographs of younger loved ones and friends who perished in the fire.

Handwritten in black marker on the pictures were messages saying "RIP" and "love you bro." There were other makeshift signs of mourning.

Nearby, adults held candles flickering in the wind; others held onto one another, for solace and to stay warm, as the group sang gospel songs and appealed to a higher power.

"We are praying for the families with several dozen residents who remain hospitalized with serious injuries fighting for their lives," said Vanessa Gibson, the Bronx borough president. "We are going to be with you every step of the way. … You are our neighbors."

The victims' deaths were ruled an accident, all caused by smoke inhalation, Julie Bolcer, a spokeswoman for the city's Office of Chief Medical Examiner, said on Tuesday.

The smoke from the apartment where the fire started spread because self-closing doors failed to shut as required by law. It spread throughout the building, killing the victims and injuring dozens more.

The family fleeing the duplex apartment on the second and third floors where the fire began had pushed the unit's front door fully open. It never self-closed as required by law, according to the FDNY.

Why that door failed to close — along with another door, to a stairwell upstairs — is a key focus of the fire marshal's investigation into the blaze.

"When it was opened all the way, when occupants escaped, it did not close on its own," FDNY spokesman Frank Dwyer said Tuesday.

Mayor Eric Adams on Monday said the building heat was working properly. The space heater was also being used to warm a bedroom in the family's unit, he said.

Exactly how and why that space heater malfunctioned is also being investigated by the fire marshal, Dwyer said.

Everyone in that duplex apartment, where a family of eight to 12 people lived, managed to escape, he added.

The blaze's worst impact was concentrated on the second, third and 15th floors, although the smoke reached throughout the building, according to Dwyer.

Chief of Department Thomas J. Richardson said multiple stairway doors were open as well, leading to pervasive smoke spread, and chiefs on the scene thinking that there was a second fire.

"In fact, they thought they had a separate fire, maybe, even on the 15th floor, the way the smoke was coming out the windows of the building, but it just turned out that it was smoke that had spread throughout the building due to open stairway doors and the like," he said.

In all, more than 60 people were injured in the building — a 19-story, 120-unit apartment in a below-market-rate housing development called Twin Parks North West in the borough's Tremont section.

The building is structurally sound, although damaged with smoke, water and other effects of the fire and the firefighting aftermath, Dwyer said. Occupants are returning, where possible.

FDNY chief from LI retires after a career ending with deadly Bronx fire"I don't recall a fire like that in my career," said retiring FDNY Chief Thomas Richardson. "I had fires with multiple fatalities. But nothing on that scale — at all." Electric heaters can be 'very dangerous in the wrong hands,' fire expert saysAfter an electric space heater malfunctioned and caused a deadly fire in the Bronx, Long Island officials say a similar tragedy could occur in any community if proper precautions are not taken. Fatal Bronx fire: Probe into why doors failed to close, mayor saysInvestigators are examining why safety doors at Sunday's deadly apartment fire in the Bronx failed to close automatically as required by law, allowing choking smoke to fill the building and kill 17 people, including eight children, Mayor Eric Adams said on Monday. 17 dead, including 8 children, in NYC apartment fire, officials saySee photos from the scene at the 19-story apartment building in the Bronx, and from a memorial service held Tuesday.

Forecast: Rain, then snow for Thursday morning commuters
Omicron: On the front lines
Seniors Calendar: Events from Jan. 23 to Jan. 30
Barge off Long Beach surveys best route for wind-powered cable
A community comes together to 'put food in the fridge that people will actually eat'
School Notebook: Winners in Emerging Leaders contest
Didn’t find what you were looking for?