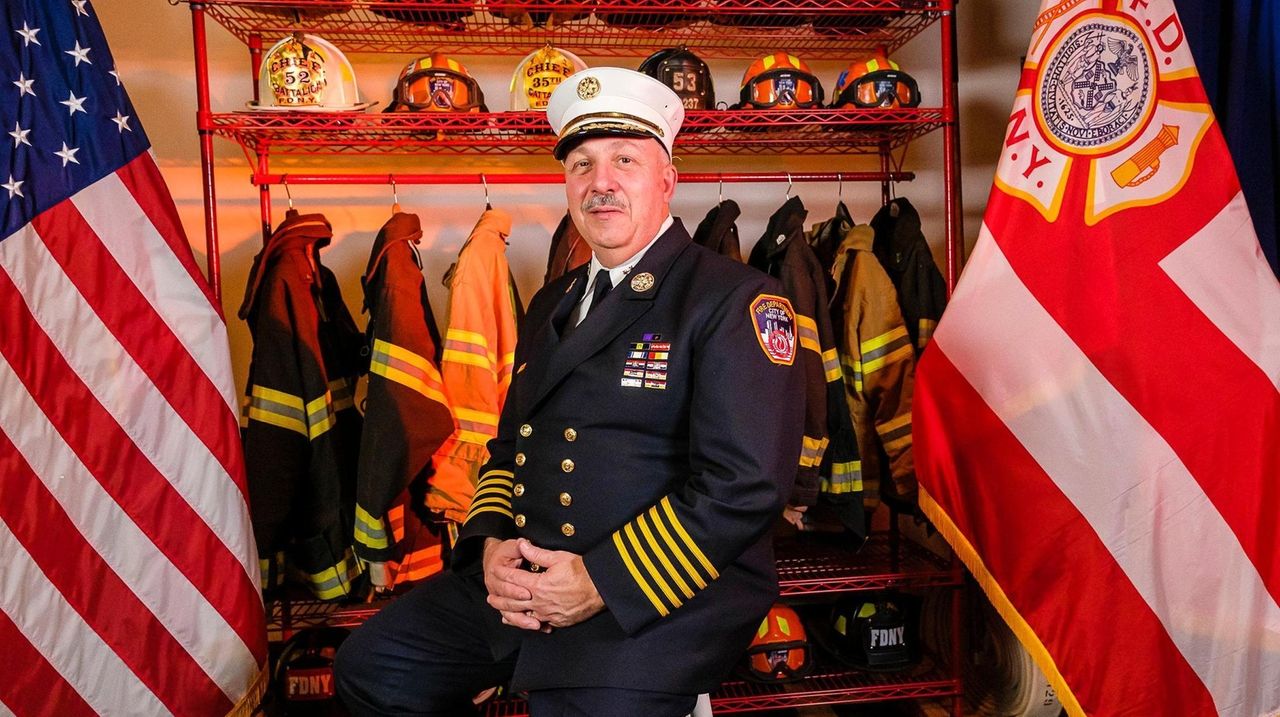 Just before Thomas J. Richardson, FDNY chief of department, was set to retire, he responded to the deadliest fire in his career: A Bronx blaze that killed 17 people, including eight children.  Credit: Jeff Bachner

The last fire FDNY Chief of Department Thomas J. Richardson responded to was the deadliest and one of the most tragic of his 41 years on the job.

Seventeen dead, including eight children. More than five dozen victims injured. Firefighters had pushed the limits of their air supply to maximize how many civilian lives could be saved.

The chief of department — the FDNY’s highest-ranking uniformed officer — doesn’t go to most calls. But he went Sunday, getting there as the fifth alarm was transmitted, one of more than 200 firefighters responding to New York City's deadliest fire since 1990.

"Those first, probably, 20 minutes to a half-hour of that fire, they were in the process of removing and reviving 32 people that were either in respiratory or cardiac arrest, in serious condition," Richardson said his chiefs reported.

"It was a scene that many of the chiefs said they never saw before in their career. People out in front of the building doing CPR on maybe 20 people at a time. It was surreal."

On Wednesday, Jan. 12, Richardson, age 62, retires from a firefighting force he joined at 21. His early career was spent in Brooklyn, the borough where he was born before moving to Deer Park at age 3.

Richardson’s ascension began in 1990 — to supervisory roles in the borough and beyond, including in Queens, and helping to oversee training, operations and other commands. Along the way, he worked for five months down at Ground Zero in the aftermath of the 9/11 terrorist attacks.

"As glorious as it is, and it is the greatest job on Earth, but at the end of the day this is a very, very dangerous job, it’s a dirty job. You have to be prepared every single day, and every single night, you come to work," he said in an interview.

He has been cited for bravery five times in his career, according to FDNY spokesman Jim Long.

One of those times, in 1989, he helped rescue a 15-year-old boy from a fire. Richardson was lowered by his rope from the roof of a three-story brownstone and saved the teen, according to a post by the FDNY Foundation, the agency’s nonprofit arm.

Although his official retirement date is March 26, he’s got vacation time to use, so his last day is this week.

He’ll be spending more time with his family — his wife, Julie, a retired schoolteacher in Dix Hills and Copiague, and three children in Huntington and East Rockaway and four grandchildren — and return to teach part-time at Yaphank's Suffolk fire academy, which trains volunteers from the county’s 109 departments.

Richardson, a Deer Park volunteer out of high school, had taught there for 30 years before stopping in 2017 when he became a staff chief in the city.

He’ll bring more than four decades of firefighting to the academy as well as supervisory experience on Long Island and in New York City, including Sunday's horrific Bronx blaze.

"I don’t recall a fire like that in my career," he said. "I had fires with multiple fatalities. But nothing on that scale — at all."

NYPD cop's life and legacy honored 5 years after his death
2:37
Hochul's proposed budget would increase school aid funding by 7%
Original Mr. Met dies at 83
Fifth arrest made in 2016 gang killing of teen in Uniondale woods
Forecast: Cold night, then stiff breezes on milder Wednesday
Ex-principal put on leave as retaliation for his defense of bullied student, lawsuit says
Didn’t find what you were looking for?