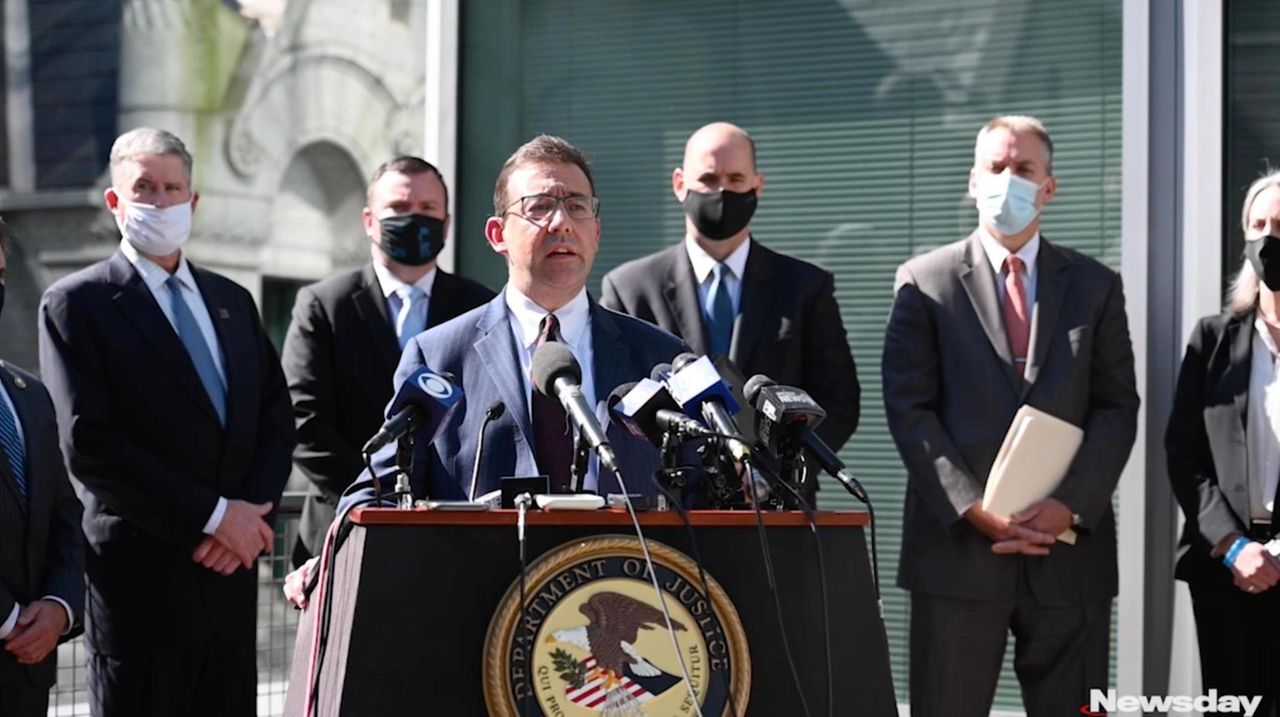 The U.S. Justice Department and New York City police officials Wednesday announced a major expansion of a joint project to crack down on the increase in major violent crime by prosecuting suspects in federal court where fewer defendants are released on bail and where they potentially face stiffer penalties.

The announcement comes in the midst of what city and federal officials have called a drastic rise in gun violence, mainly in areas of Brooklyn, in the past year.

"In the middle of a global pandemic, we have also seen a local epidemic of shootings in our city, and we are responding with responsible, data-driven measures to protect our communities from armed repeat offenders and violent gang members to prevent neighborhoods and public housing from being turned into battle zones," said Acting Eastern District U.S. Attorney Seth DuCharme.

"If you carry an illegal firearm on the streets of New York City we will not rest until you are brought to justice," Shea said.

The aim of the program known as RASP, for Rapid and Strategic Prosecution Initiative, is to get the main people responsible for violent crime — "the drivers of violence’’-- off the street for lengthy times, according to officials attending a news conference at the U.S. Attorney’s office in Brooklyn. In federal courts, defendants also face harsher penalties than in state courts, officials said.

Under RASP, a dozen Eastern District Assistant U.S. Attorneys would be assigned to the prosecution of suspects arrested by New York City police and federal agents from the FBI, Bureau of Alcohol, Tobacco, Firearms and Explosives, Department of Homeland Security, and U.S. Marshals, the officials said.

A smaller version of the program had already been in place.

The federal prosecutors added to the anti-violence effort will work along with the 28, who already are involved in gun, street violence and gang crimes, under the supervision of two senior prosecutors, Lara Treinis Gatz and Jack Dennehy, DuCharme said.

Between January and Sept. 15 of this year, there were 321 people killed in New York, compared with 230 in the same period in 2019, officials said. The 91 additional homicides represent an increase of nearly 40%, according to a one of a number of EDNY statistics about violent crime in the area.

In the past weekend, more than a dozen people were shot and two died as a result of gun violence, according to the EDNY statistics.

The difference between sentences in similar crimes for federal and state crimes is marked. The average jail sentence for gun cases from 2015 to the present for federal crimes is 45 months, while that for federal cases is 10 months, officials say.

In addition, carrying a firearm during a crime of violence in the federal system calls for a mandatory minimum sentence of between 5 years and life imprisonment, officials said.

There are also categories of so-called "prohibited persons" who can get up to 10 years in federal prison for possession of a firearm under federal law. And if those "prohibited persons" have had three or more convictions for violent or drug-trafficking felonies, they face a minimum sentence of 15 years without parole, EDNY officials said.

The "prohibited persons" include felons, or people awaiting trial on felonies; drug users or addicts; illegal or nonimmigrant aliens; persons judged as "mental defective" or who have been committed to a mental institution; person facing a domestic restraining order or conviction for misdemeanor domestic violence; fugitives, and people dishonorably discharged from the military, officials said.

Officials said gun crimes were not the only ones that will also be prosecuted in federal courts. Among other crimes will be robbery, carjacking, extortion, narcotics and credit-card fraud. In the federal system, narcotics convictions can carry a mandatory minimum of 10 years to life in prison, officials said.

When it comes to bail, 68% of suspects charged with federal guns crimes from August to October this year have been detained; while 32% were released. For state gun charges, 17% were detained, while 83% were released, officials said.

Forecast: Rain, then snow for Thursday morning commuters
Omicron: On the front lines
Seniors Calendar: Events from Jan. 23 to Jan. 30
Barge off Long Beach surveys best route for wind-powered cable
A community comes together to 'put food in the fridge that people will actually eat'
School Notebook: Winners in Emerging Leaders contest
Didn’t find what you were looking for?