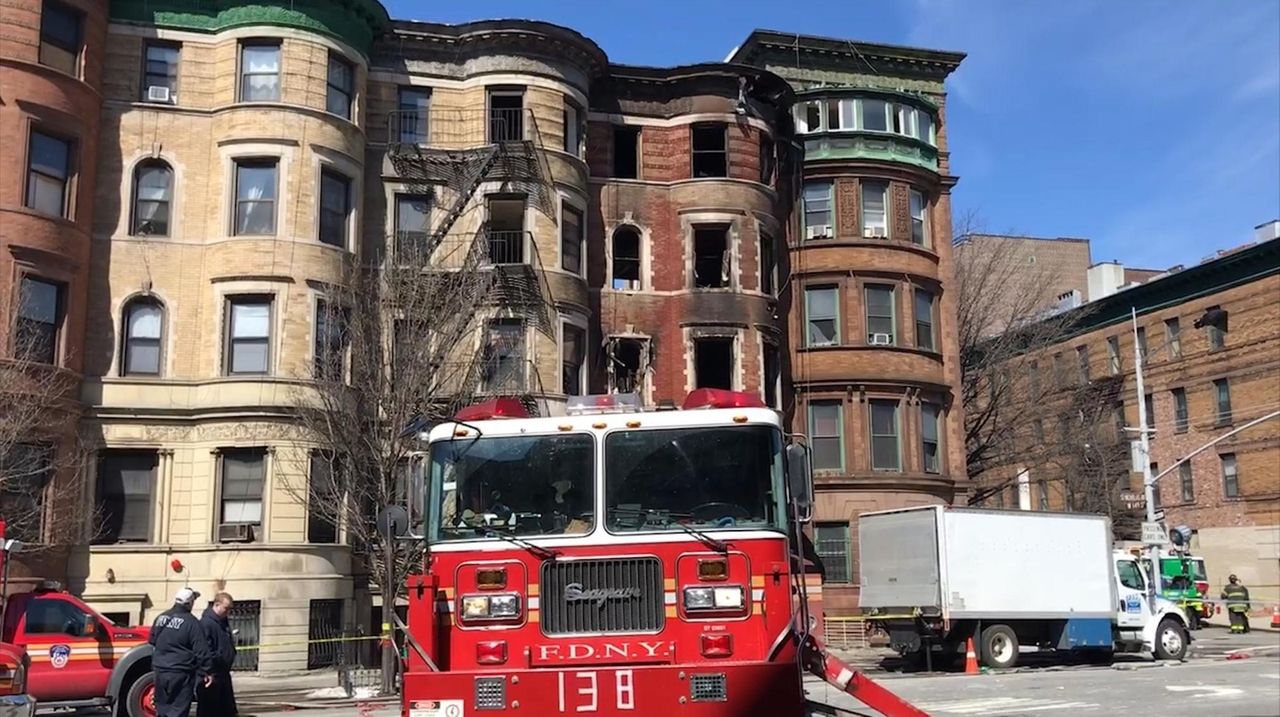 An FDNY firefighter from Floral Park died after battling a Harlem blaze Thursday night on the set of a film starring Edward Norton, officials said.

Michael Davidson, 37, of Engine Company 69, was a 15-year veteran from a family of firefighters, the FDNY said. His father is retired and had worked at the same Harlem firehouse; his brother works in the Bronx.

Davidson is survived by his wife, Eileen, and four children — three daughters ages 7, 3 and 1, and a son, age 6 — the FDNY said.

“Our entire department, our entire city, mourns this horrific loss of a very brave firefighter,” Commissioner Daniel Nigro said at a news conference early Friday, his voice breaking. “Our hearts and our prayers go out to the family, and may God rest his soul.”

NYPD Crime Scene investigators, fire marshals and arson bureau investigators looking into the cause of the fire inspected the exterior of the building, including a portable charging station called a junction box. It was brought in by the film crew and is designed to give power to all the equipment the crews bring on set.

The building, the former home of St. Nick’s Pub, a St. Nicholas Avenue jazz club that closed in 2011, is not structurally sound so investigators were delayed getting inside.

In a statement the producers of the period crime drama “Motherless Brooklyn” said “our hearts ache in solidarity” with Davidson’s family. Norton is producing and directing the film.

“We watched firsthand with astonishment as [firefighters] charged into the smoke to make sure all were safely out and then fought to contain the blaze and prevent it from spreading, putting their lives on the line as they do every day,” the statement said. “The FDNY are real life super-heroes and have our boundless admiration.”

Producers explained the circumstances of the fire, saying they were “towards the end of our working day and had dozens of people working on site when our crew noticed that smoke was coming into our set and into other parts of the building from below us.”

Upon noticing the smoke “coming up into our set, our crew immediately alerted the fire department and began alerting residents of the building even as we evacuated our cast and crew.”

The first call came in just before 11 p.m. The fire was in the cellar of 773 St. Nicholas Ave., which was unoccupied, Nigro said.

Conditions worsened after hose lines were brought down, he said, and firefighters had to retreat.

Davidson was assigned to the nozzle, which means he had “the responsibility of operating a hose line to suppress the fire,” the FDNY said.

“They encountered heavy fire. They did the best they could. The fire continued to advance. Units were forced to back out of the building. Somehow, while backing out of that building, firefighter Davidson was separated from the rest of the unit,” Nigro said.

Fellow firefighters returned, searched the cellar of the building — which was built in 1920 and not fireproof — and found Davidson unconscious, Nigro said. He died at Harlem Hospital.

“This experienced firefighter had the job of putting out this fire, which he was bravely doing,” Nigro said. “Sometimes the volume of fire just is so overwhelming that it can’t be accomplished.”

Nigro noted that Davidson was the 1,150th New York City firefighter to die in the line of duty in the FDNY’s 153-year history.

Davidson was appointed as a firefighter in May 2003, and “on four different occasions he was cited for bravery and lifesaving actions,” the FDNY said.

The crowd, some in uniforms, saluted as pallbearers carried Davidson’s body, draped by the American flag, from the FDNY ambulance into the funeral home.

A few men put their hands on each other’s shoulders to console one another. Others embraced in hugs.

Davidson was the son of retired firefighter Robert Davidson, who served the department for 26 years “primarily in the same firehouse as his son,” the FDNY said. His brother, firefighter Eric Davidson, an 11-year veteran, works at Engine Company 88 in the Bronx.

Mayor Bill de Blasio cut short a vacation with his wife to Florida, returning to the city Friday to view the scene of the fire and meet with Davidson’s wife.

“This good man, Michael Davidson, helped us save lives last night. He’s no longer here,” de Blasio said, appearing Friday evening on 1010 WINS. “He was considered one of the truly great firefighters.”

Outside the building, a walk-up with space in the basement for a bar/restaurant and apartments on the first through fourth floors, members of the FDNY huddled where one of their own had lost his life.

The Department of Buildings said it issued vacate orders for the building, as well as to the neighboring building to the north, “due to extensive fire damage.”

Tenants in the apartments were relocated through the Red Cross, officials said.

All citations for the building covering at least the past decade are “paperwork” violations and don’t concern safety issues, said Department of Buildings spokesman Andrew Rudansky.

Donald Bowers, 55, of Belmar, New Jersey, said he was operating a truck housing camera equipment just outside the building when the fire broke out.

He said he got a call on his radio about smoke in the building and several minutes later he saw flames.

“It was like pandemonium everything happened so quick,” Bowers said.

He said “it was an immediate response” by the FDNY.

Of the firefighter’s death, he said, “Everybody was besides themselves.”

“They don’t run from the danger,” he said. “They run to the danger.”

What we know about ‘Motherless Brooklyn’"Motherless Brooklyn," the film being shot in the Harlem building that caught fire Thursday night, ... Fallen firefighter from LI has family ties to FDNYMichael Davidson recalled as a "good family man" who worked in the same firehouse as his father and whose firefighter brother works out of the Bronx. A rough stretch for the ranks of the FDNYFirefighter Michael R. Davidson of Floral Park became the third member of the department's current ranks to die in 2018.