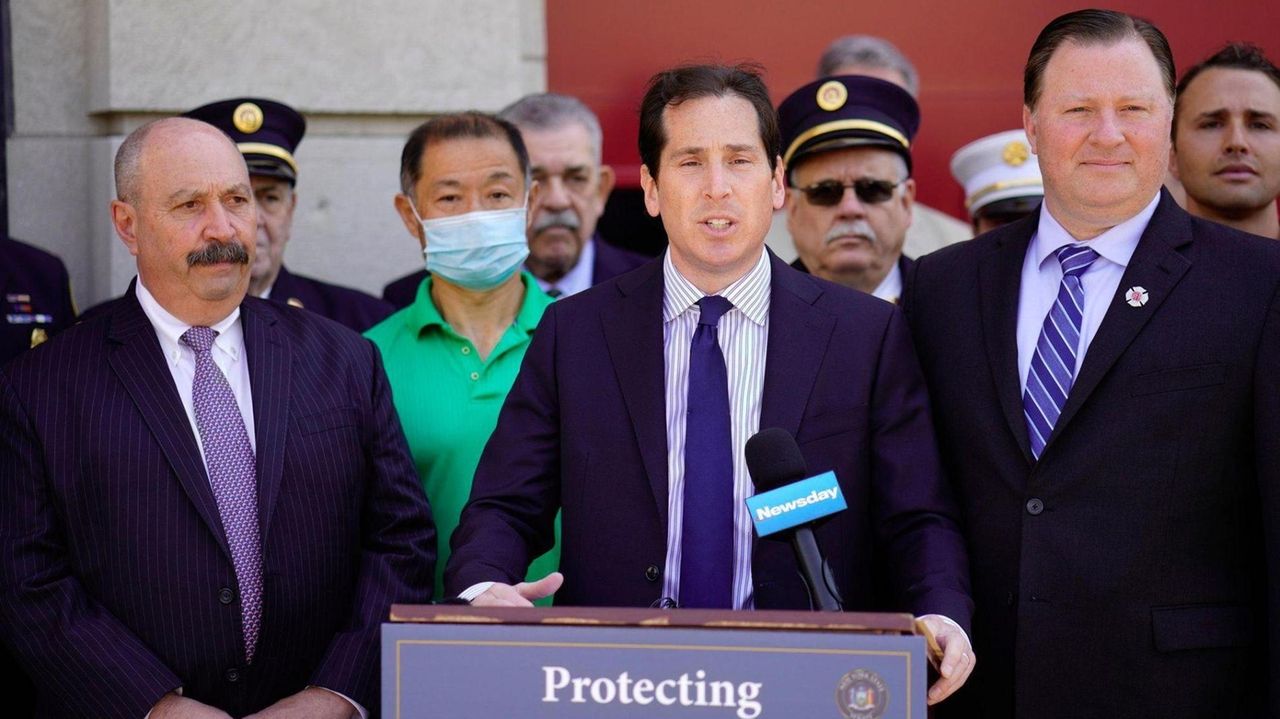 State Sen. Todd Kaminsky (D-Long Beach) spoke at a Tuesday news conference in Queens where he and firefighters discussed concerns that chemicals used in the manufacturing of some clothing, furniture and technology can give off toxic fumes when on fire. Credit: Newsday / Chris Ware

Proposed state legislation would ban flame-retardant chemicals in furniture and electronics that the bill’s sponsors say cause cancer, endanger firefighters extinguishing blazes and harm children who might put the products in their mouths.

Speaking Tuesday outside a firehouse in Queens, State Sen. Todd Kaminsky (D-Long Beach) said the law — the Family and Firefighter Protection Act — would ban not just furniture and mattresses with the retardant but also other household items such as electronics that contain and emit the chemicals.

"This bill will save lives. Why will this bill save lives? Because the chemicals in flame-retardants cause serious health problems — health problems like cancer, and in children, they cause developmental disabilities," he said at a news conference outside Engine Co. 317/Ladder Co. 165/Battalion 54.

According to a 2017 report by the National Conference of State Legislatures, at least 12 states, including New York, and the District of Columbia regulate flame retardants in some way.

New York and several other states already require manufacturers of certain electronics to tell the state if their products exceed the European Union's maximum concentration values for PBDEs.

If enacted, the bill would bar the sale of certain items such as mattresses or upholstered furniture with the flame-retardant chemicals, and ban electronic video and computer monitor screens from being sold with the substances of concern. The law would take effect in about a year and a half.

In a letter last month, a coalition of business groups said they oppose the legislation, citing the American Chemistry Council's contention that "flame retardants provide an important layer of fire protection by helping to stop or delay the onset or spread of fires, providing additional life-saving time to escape a fire." Kaminsky rejected the argument, saying the perils of the chemicals outweigh the benefits.

Kaminsky said the burning retardants can be inhaled by firefighters, stick to their gear and cause health problems.

"We know that this is what the scientific literature recommends we need to do. And when someone tells us, you could do X to protect your firefighters, we’re obligated to use every inch of our effort and every fiber in our being to get it done," he said.

2:15
For dad with new heart, the Father's Day gift is just being here
2:01
LI seniors, cut off amid COVID-19, are back on the road to normalcy
Nassau Hub project could start by March
1:54
Nassau Police Commissioner Ryder says he won't resign
1:55
Some Hispanic leaders voice support for Nassau's top cop
State starting to shut down some mass vaccination sites
Didn’t find what you were looking for?