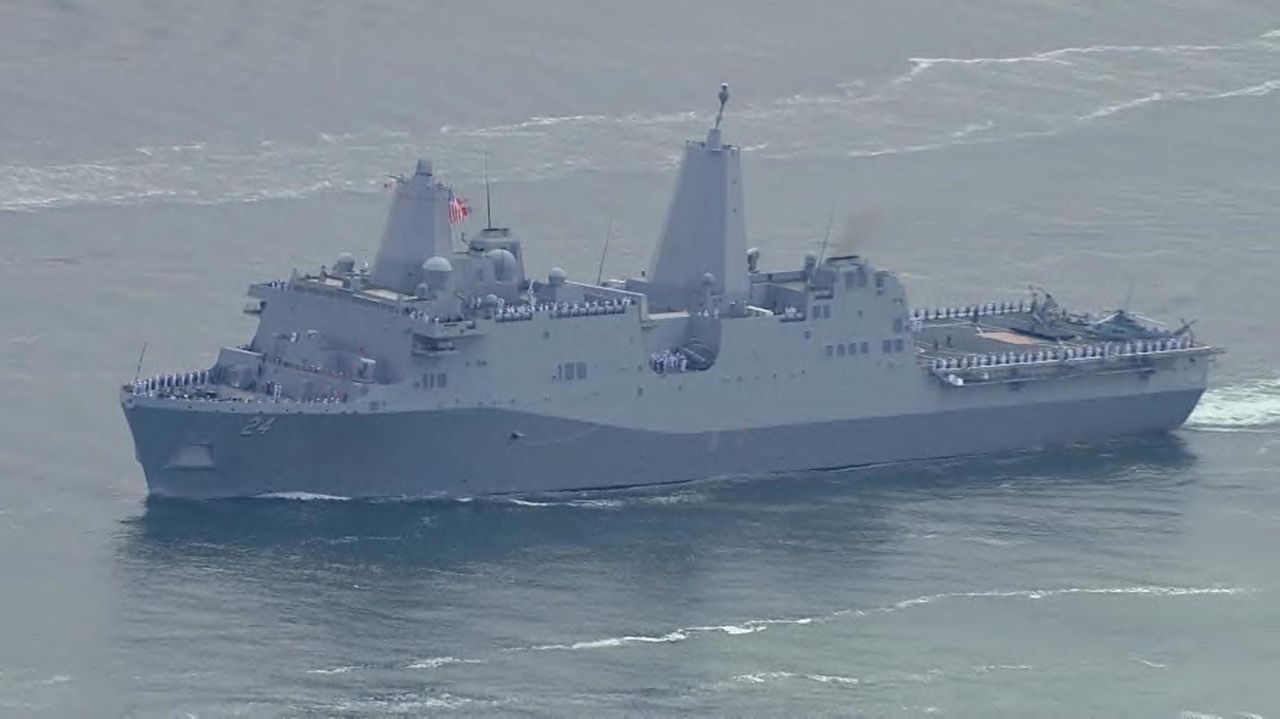 A mini-armada glided into New York Harbor on Wednesday to deliver swarms of white-suited sailors onto the streets of New York City to mark Fleet Week, a seven-day spectacle of military exhibitions and shore-leave revelry. Credit: News 12 Long Island

The USS Arlington made its way into New York Harbor midday Wednesday and then, nudged by a pair of muscular tugs, came to rest at Manhattan’s Pier 90.

The Navy vessel was part of a flotilla of 14 ships that arrived in the city Wednesday for Fleet Week 2018, delivering swarms of military personnel onto the streets of New York City for the seven-day spectacle of exhibitions and shore-leave revelry.

The nautical parade into the harbor, which included a handful of the Navy’s most capable warships, drew curious onlookers to parks and waterside overlooks from Brooklyn and Staten Island to just south of the George Washington Bridge.

Marie Latuner, was among those who craned for a view as the Arlington arrived on the West Side of Manhattan with its crew members shoulder to shoulder in their sailor whites at the ships rails.

She had hoped to catch a glimpse of her daughter Christine, 19, who along with other Marine Corps recruits awaiting boot camp, had been invited to sail into the harbor aboard the amphibious transport ship as part of Fleet Week festivities.

“We don’t know which one she is, but it was exciting to see them in their whites, lined up along the deck,” said Latuner, of Little Neck, who peered at the grey-hulled craft through a wire mesh fence. “It is a very exciting thing for her to get on a ship like this.”

Aamong the arriving 2,300 sailors is Lt. Carley Tadlock, 27, of Islip Terrace, a ship’s navigator who the Navy said had guided the 25,000-ton Arlington as it made its way toward New York.

“It’s exciting, because it actually gives us a chance to learn about the ship and what she does,” said Danielle Tadlock, an elder sister of the 2009 graduate of East Islip High School, who also said she and several relatives would be on hand to welcome Lt. Tadlock home. “She’s absolutely dedicated. She has wanted to be in the Navy since ninth grade.”

The Pentagon has staged Fleet Week in New York almost every year since 1984 to offer civilians a firsthand look at America’s floating military might, and a chance to meet some of the men and women who make up today’s seaborne fighting forces.

Joining the Arlington, named in commemoration of the 9/11 terror attack on the Pentagon, was the USS Mitscher, an Arleigh Burke-class guided missile destroyer. Coast Guard ships are also among the 14 vessels.

Fleet Week demonstrations have taken place intermittently since 1935, when more than 100 ships and about 63,000 Navy personnel descended on San Diego in conjunction with the California Pacific International Exposition.

This year’s New York event involves far fewer ships and personnel, but there will still be plenty to see and do.

Ships are docking at piers in Manhattan, Brooklyn and Staten Island, and will offer onboard tours daily from 8 a.m. to 5 p.m. Daily ship tours aboard the Intrepid Sea, Air and Space Museum at Manhattan’s Pier 86 will be offered from 10 a.m. to 5 p.m.

The U.S. Merchant Marine Academy will host the USS Zephyr, a 174-foot coastal patrol boat, at its Kings Point campus, but will not offer ship tours.

On Long Island, the Navy will perform an “aviation event” between 10 a.m. and 2:30 p.m. Saturday at Eisenhower Park in East Meadow, followed by a brass-band performance.

More events, along with dates and times, can be found at militarynews.com/app/fleetweeknewyork, according to the Navy.