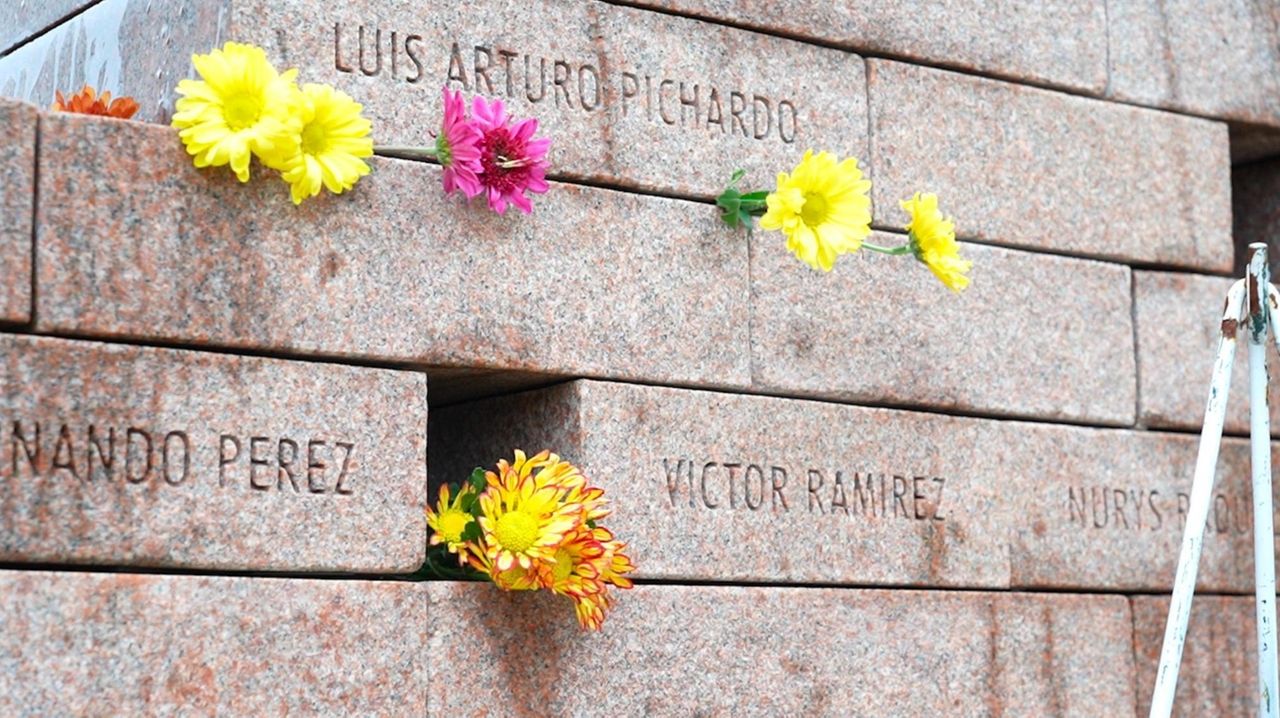 Families gathered for a memorial service in Belle Harbor, Queens, on Friday to honor those who died on American Airlines Flight 587 on the 20th anniversary of the crash. Credit: Corey Sipkin; NY Mayor's Office

Standing in the Rockaways, where American Airlines Flight 587 crashed 20 years ago Friday, hundreds of family members held photos of their loved ones tight to shield them from the torrential rain.

New York City Mayor Bill de Blasio gathered with officials at the Flight 587 Memorial, tolling a bell to remember the 265 people killed at 9:14 a.m. Nov. 12, 2001, when the plane, which took off from Kennedy Airport bound for the Dominican Republic, crashed into the small Rockaways neighborhood of Belle Harbor, Queens.

"It's hard to believe 20 years have passed, but we all can feel, right here, what it felt like those days just after 9/11, feeling that pain already. And then another tragedy, a tragedy felt from the Dominican Republic all the way here to Belle Harbor — 265 good souls lost," de Blasio said.

NTSB officials said the plane crashed just three minutes after takeoff when it hit turbulence from the wake of a Boeing 747 jet that had taken off two minutes earlier.

Officials said the first officer had tried to adjust the rudder to level the plane, causing the plane’s tail and two engines to break off. The crash killed all 251 passengers and nine crew members on board, as well as five people on the ground.

The crash of the Airbus A300 that morning was centered in the Rockaways, where just two months earlier, 58 people from the area had been killed in the Sept. 11 attacks at the World Trade Center.

De Blasio said that for the past 20 years, family members of victims "created a community ... out of the pain" as they have come together to remember.

"And that pain does not go away," de Blasio said, "but we still, even amidst the pain, appreciate all the people who came in that moment to try to help — the first responders, the people from the neighborhood who tried to help from that moment on."

Family members braved the wind and rain Friday to lay white roses in the patchwork brick memorial facing toward the Dominican Republic.

Patrick Hartigan, 53, of Floral Park, came to remember his sister, Marion Hartigan, 30, of New Hyde Park, who was going on vacation with Diane Monte, of Levittown. They were both nurses at Nassau University Medical Center in East Meadow.

Marion Hartigan was celebrating serving her first year as a nurse, her brother said. He worked for American Airlines and learned of the crash before almost everyone else.

"You still miss the person and the life she would have had," he said.

Many of those who gathered Friday said the pain was still raw as they relive the crash every year.

Rosa Pichardo, 34, of Central Islip, clutched a photo of her father, Luis Pichardo, 53, of Farmingdale, who was on board, planning to vacation in the Dominican Republic.

"It still feels the same way every year," Pichardo said. "I'm here for his memory. Maybe it brings a little closure."

Ana Reyes, 52, of Queens, said her brother Roberto Anthony Reyes was traveling to see his 2-year-old daughter on her birthday.

"It's like living it all over again in a sense," Reyes said. "We never got to say goodbye because we never found an actual body. We're saying goodbye [to] a casket."