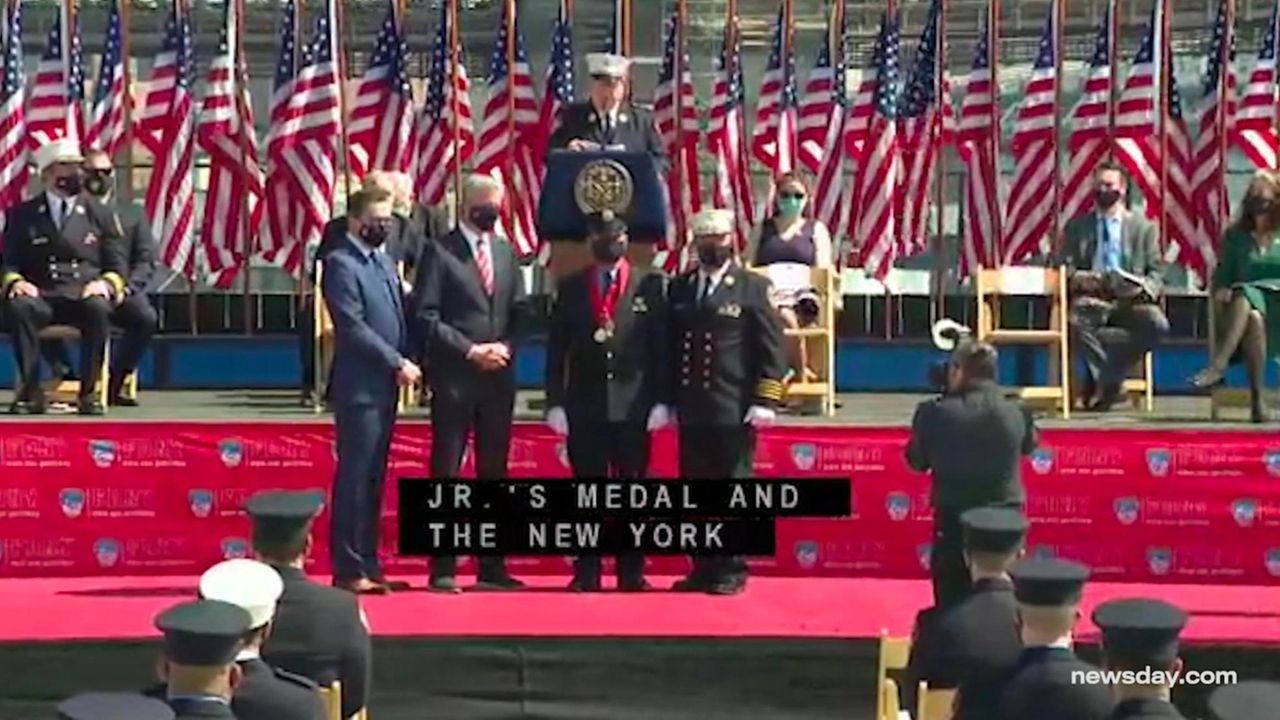 "Firefighter McCoy risked his life to save this man. He entered the warehouse with rapidly deteriorating conditions without the protection of a hose-line, in zero visibility and with a rapidly progressing fire," said a note accompanying a medal for McCoy. The medal is named in honor of a former chief of department, Peter J. Ganci Jr.

McCoy, of East Northport, was one of dozens of firefighters and medics honored Wednesday at the FDNY’s Medal Day. The firefighters come from all over the metropolitan area, including Amityville, Huntington, Levittown, Long Beach, Massapequa Park, New Hyde Park, Oakdale, Sayville, Wantagh, West Babylon, West Hempstead and elsewhere on Long Island.

Medal Day is an annual tradition for the FDNY, when the heroic acts of firefighters and other personnel are feted in the plaza in front of City Hall. Family, friends and colleagues pack the plaza to honor and memorialize them in raucous celebration.

But last year, the ceremony was put off as it coincided with the beginning of the coronavirus pandemic — and front-line firefighters and medics were instrumental in the city’s response to the emergency.

"This is a great celebration of really extraordinary individuals who do so much to protect all of us," Mayor Bill de Blasio said in remarks before the ceremony. "And, obviously, like so many other things, it was thrown off by last year, but it's back. So, we expect a really joyous day today celebrating our heroes."

FDNY firefighter Terence F. McSweeney of Babylon was recognized Wednesday for his heroics while battling a fire on Jan 23, 2019, in Queens, just two days after the rescue efforts that earned McCoy his medal. McSweeney climbed a portable ladder, vented the window, and "black smoke began pulsating from it," the FDNY wrote in awarding him a medal.

"With great difficulty, he entered the window, just barely able to fit through it," the commendation said. "He immediately searched for the bathroom door to close it due to the punishing heat and blackout smoke condition… He found the victim wedged between the bathtub and toilet."

The victim ultimately died, the FDNY said, "but this in no way diminishes FF Terence F. McSweeney’s bravery."

Comptroller: Long Beach relying on 'one shot revenues' to balance budget
Suffolk gets record $7.2 million payment from OTB
3:19
No criminal charges for many drivers in crashes that kill pedestrians, bicyclists
What we know about the high, broad turnout in the 2020 election
Rep. Zeldin: I won't call Biden election 'illegitimate'
Cops: Body found in burned out car fire in backyard of home
Didn’t find what you were looking for?