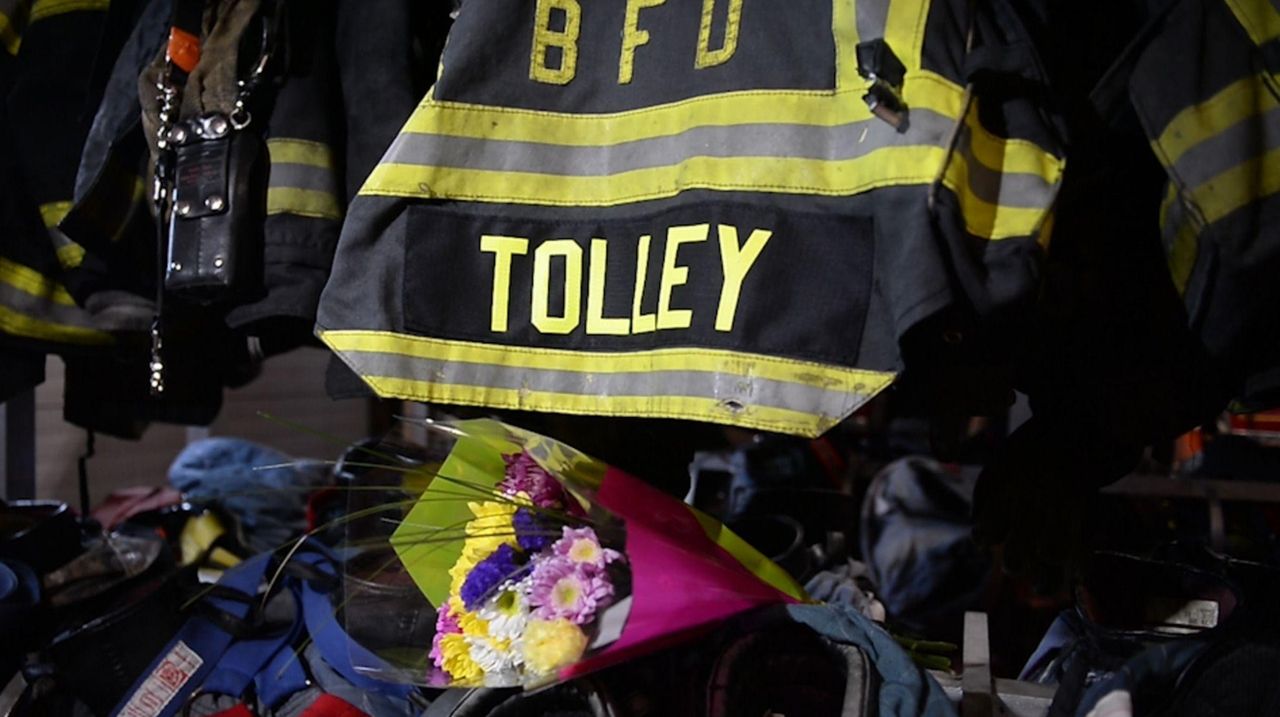 A large portrait of Firefighter William Tolley hung between the bay doors of the Ladder 135 and Engine 286 house on Friday, April 21, 2017, the day after Tolley, 42, a 14-year veteran of the New York Fire Department died in a fall from the roof of an apartment building in Ridgewood. During the day, visitors paid respects to Tolley's co-workers at the station near the line between Ridgewood and Glendale. Credit: Steve Pfost / Charlie Eckert

This story was reported by Sophia Chang, Matthew Chayes, Zachary R. Dowdy, and Mark Morales. It was written by Dowdy.

FDNY investigators are focusing on whether a city firefighter from Bethpage who fell five stories to his death in Queens was jolted from a raised fire truck bucket, an official said Friday afternoon.

William Tolley, 42, was getting in the bucket or had just gotten in it when the accident occurred, said the official, who was briefed on the preliminary findings of the investigation. Tolley, from Ladder 135, was not yet harnessed, according to the official.

“He hadn’t had an opportunity to do that yet,” the official said, speaking on condition of anonymity.

The official said there is a piece missing from the top of the five-story apartment building in Ridgewood, and that corresponding piece may have been found on the ground. Investigators are eyeing whether it came off when the bucket made contact with the building.

A second official who asked not to be identified said there appeared to be contact between the bucket and the concrete edge of the roof.

“There’s some scraping” on the edge, the second official said. The bucket “scraped away a little bit of the concrete.”

The FDNY is doing two simultaneous investigations — one, by the marshal, into the fire itself, and another by the FDNY’s Safety Command, which probes all line-of-duty deaths and serious injuries of firefighters, FDNY spokesman Jim Long said earlier Friday.

The command will examine the mechanics, the apparatus, and training, and issue a report at some point, Long said. The NYPD is assisting but is not the lead agency, because there does not appear to be any criminality involved, he said.

Tolley, a 14-year veteran, had been fighting a fire Thursday afternoon on the second floor of 1615 Putnam Ave. in the Ridgewood section of Queens when he fell. The blaze began after the residents lit incense for religious purposes and left it burning unattended, the FDNY said Friday. Tolley had been assigned to the roof as the outside ventilation firefighter.

FDNY firefighter from LI ‘loved by everybody’

Visiting hours will be from 7 to 9 p.m. Tuesday and from 2 to 4 p.m. and from 7 to 9 p.m. Wednesday. A funeral Mass will be celebrated at 11 a.m. Thursday at St. Martin of Tours Church on Central Avenue in Bethpage. Cremation is being handled by Nassau Suffolk Crematory in Lake Ronkonkoma.

On Friday, those moved by Tolley’s death offered public and private displays of respect in Queens and on Long Island.

In Bethpage where Tolley had lived, an American flag flew at half-staff in the family’s front yard Friday as a steady stream of friends and relatives went in and out of the home, sharing emotional embraces. 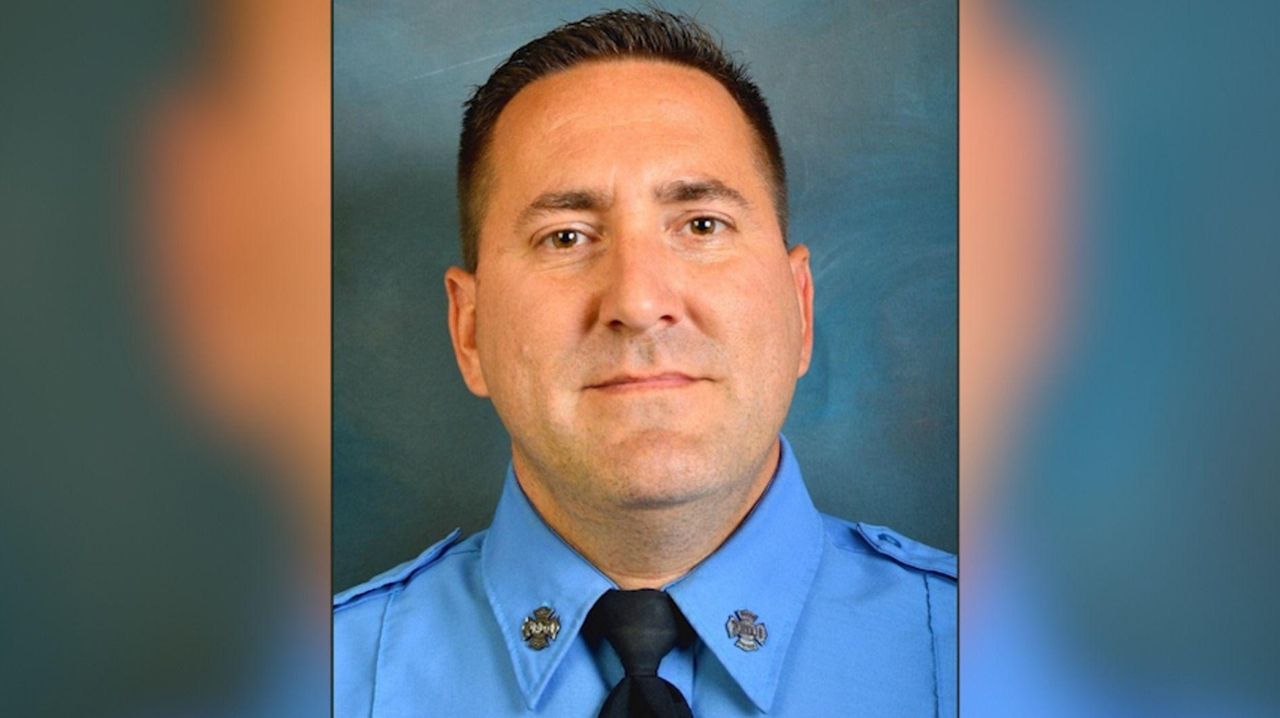 FDNY firefighter from LI dies in fall while on duty On Thursday, April 20, 2017, an FDNY firefighter from Bethpage died after falling from a roof while battling a fire in a Queens building, officials said. William Tolley, 42, from Ladder 135, was working at a building fire in Ridgewood when he plunged five stories, FDNY Commissioner Daniel Nigro said. Tolley, a 14-year veteran of the department, leaves behind his wife, Marie, and daughter, Isabella, 8, Mayor Bill de Blasio said. Credit: Newsday / Thomas Ferrara

Nassau County Executive Edward Mangano, who lives in Bethpage, ordered flags on all county buildings lowered to half-staff through Thursday.

Firefighters rigged archways along Hicksville Road on Friday, with raised ladders suspending American flags along the route to the funeral home as his distraught family waited to receive his body.

There, in the parking lot, his wife, Marie, and 8-year-old daughter, Isabella, stood with tears in their eyes as they observed the flags, suspended by the ladders. The little girl wore her father’s FDNY shield on her jacket. A group of firefighters, some in tears themselves, stood at the ready, snapping to attention as the FDNY ambulance carrying Tolley’s body pulled up.

Six of Tolley’s firefighting colleagues, outfitted in dress blues, flanked the stretcher holding his body, which was draped in an American flag.

The small procession carried it into the funeral home, followed by Tolley’s family, as other firefighters saluted.

Meanwhile, in the Glendale section of Queens, outside of Tolley’s Ladder 135 Engine 286 firehouse, a large portrait of him hung between the bay doors above dozens of bouquets of flowers. Uniformed officials streamed in and out to pay their respects.

Later Friday night, firefighters held a ceremony to hang purple and black bunting on the firehouse.

Susan Peacock, 58, a resident who brought a bundle of flowers and works at the Stop & Shop store down the street, said the firefighters are a constant presence in the area.

Another resident said the incident made her worried for her two nephews, both FDNY firefighters.

“When it hits home, it’s hard,” said Bertha Lugo, who lives near the firehouse. “It’s very hard for the families [of firefighters]. When they go out in the morning, and then you see a tragedy like this, it reminds you how hard it is.”