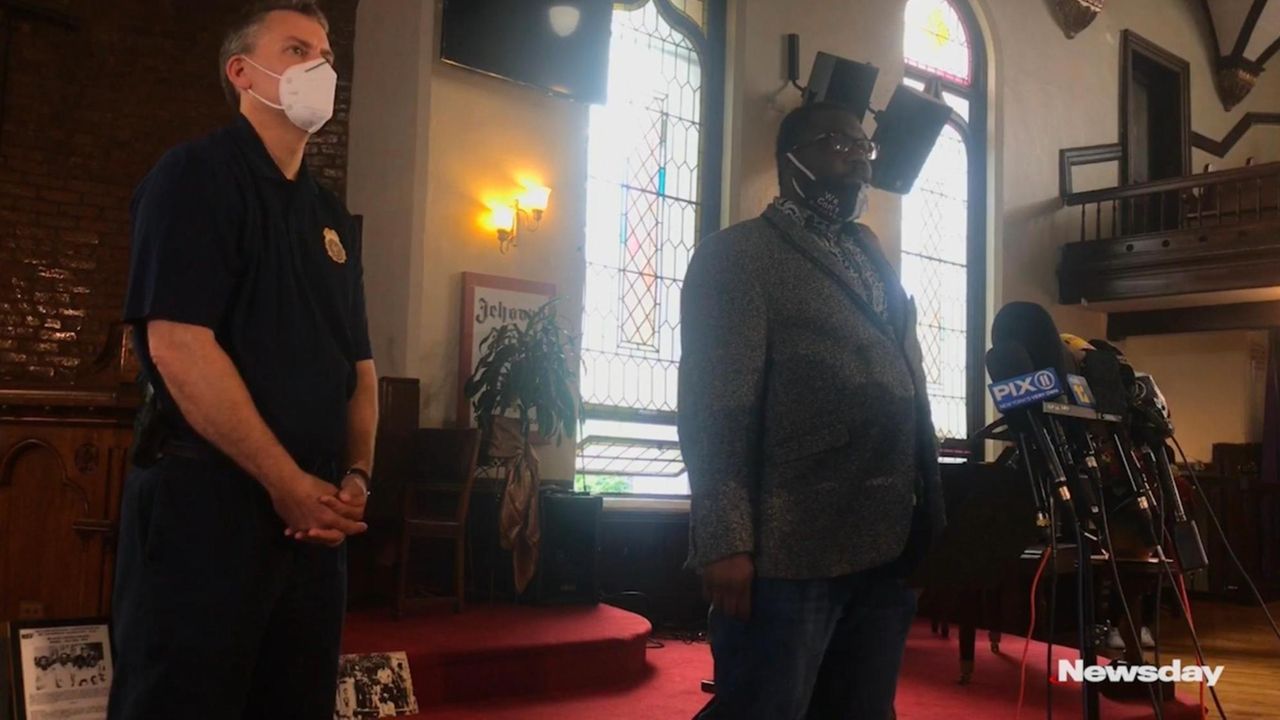 Rev. Kevin McCall, a Brooklyn preacher speaking on behalf of the brother of George Floyd, called for an end to violence and looting in Floyd's name. Credit: Newsday / Matthew Chayes

A Brooklyn preacher speaking Wednesday on behalf of the brother of George Floyd, the unarmed black man killed by Minneapolis police, called for an end to violence and looting in Floyd's name as Minnesota authorities announced new charges in the case.

McCall, appearing alongside NYPD Commissioner Dermot Shea and First Deputy Commissioner Benjamin Tucker at The House of the Lord Church on Atlantic Avenue, said the family appreciated peaceful protests, but doesn't want to see violence and looting associated with Floyd. The NYPD had said earlier Terrence Floyd would appear at the church, but he didn't show up, and instead McCall, an adviser to the family, spoke for him.

“Don’t do it in the name of George Floyd; you’re disrespecting his legacy," said McCall, who added that Terrence Floyd and other members of the Floyd family were expected to attend a memorial service for Floyd at Cadman Plaza Thursday.

The Floyd family statement came as Minnesota Attorney General Keith Ellison, who is running the criminal investigation into Floyd's killing which has already resulted in a murder charge against the officer shown on video kneeling on Floyd's neck for more than eight minutes before he died, announced new charges in the case.

Floyd's May 25 killing last week has set off days of demonstrations in New York City and on Long Island, and in cities across the country. While many of the protests have been peaceful gatherings, they have also included violent clashes with police, and separate acts of looting.

Speaking at the scene of Floyd's killing in Minneapolis Wednesday afternoon, Benjamin Crump, the lead attorney for the Floyd family, said he expected the three other officers to be charged as accomplices. He added that Floyd would have wanted to see only peaceful protests.

"What is the right thing? To make sure that George Floyd's family is afforded justice by holding these officers accountable, to the full extent of the law — each and every one one of those four officers," said Crump, speaking alongside Floyd's adult son Quincy Mason Floyd, according to his comments aired on CNN.

Floyd's son spoke briefly, thanking supporters around the world for speaking up for his father. "I'm trying to get justice for my father," said Quincy Mason Floyd. "I appreciate everyone showing support and love. I thank y'all for that."

Floyd, 46, died after Officer Derek Chauvin, who is white, knelt on his neck for more than eight minutes as Floyd pleaded for his life and said "I can't breathe," authorities have said, in a killing captured on bystander video and published on social media.

Floyd was under investigation for allegedly passing a counterfeit $20 bill, authorities said.

Chauvin had been arrested and initially charged with third-degree murder and manslaughter.

All four officers were filed from the police department almost immediately after the killing.

Crump, continuing to speak at the scene as broadcast by CNN, cited body camera footage as evidence of the officer's guilt.

"This moment is a tipping point to change America," said Crump, who then recited Thomas Jefferson's words in the Declaration of Independence ensuring Americans "life, liberty and the pursuit of happiness."

Crump added: "In America, that means black people, too."

Blue Point native Gabrielle Petito 'loved that van life.' Now she's missing.
1:08
Marchers in Wyandanch: 'Drop the guns, save our sons'
Hochul: Slight decline in number of coronavirus hospitalizations
2:10
Police in Wyoming, Florida conduct separate searches for Gabrielle Petito, 'person of interest' fiance
If you see it, kill it: Why this pretty bug has experts sounding alarms
2:29
Workforce, middle-class homebuyers shut out on Shelter Island
Didn’t find what you were looking for?