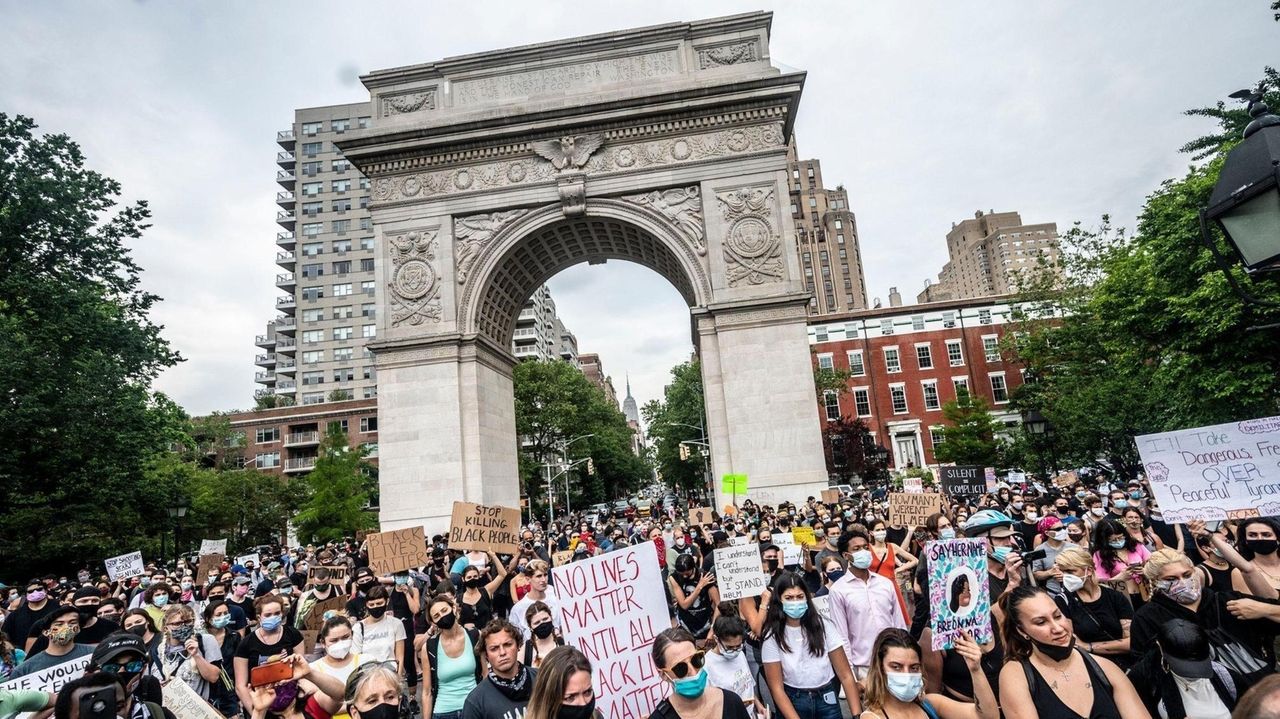 Protestors gathered in Washington Square Park on Friday to demonstrate in the wake of the police-involved deaths of George Floyd and Breonna Taylor, who was killed by police in March in Kentucky. Credit: Newsday and Charles Eckert / Alejandra Villa Loarca

This story was reported by Matthew Chayes, Nicole Fuller, Joan Gralla and Nicholas Spangler. It was written by Fuller.

New York City's streets were much quieter Friday night, with only about 40 people arrested —  mainly in Brooklyn and Manhattan, the NYPD said.

That number is down sharply from Thursday, when at least 270 people were arrested, and a significant decrease from Monday night, when nearly 700 people were arrested during protests over the death of George Floyd, who died while in Minneapolis police custody more than a week ago.

The NYPD did not say how many of those arrests were of demonstrators. The NYPD also had no immediate comment on any reports of looting, which had erupted earlier this week.

The Associated Press reported that crowds dwindled on their own at various locations, though officers in Brooklyn made at least a dozen arrests while dispersing one group.

NYPD Commissioner Dermot Shea announced Friday that two officers have been suspended without pay for their actions, as demonstrations continued across the city and the mayor acknowledged some earlier violent clashes between protesters and police.

Shea said that an officer seen on video pushing a woman to the ground on May 29 in Brooklyn has been suspended, along with an officer seen May 30 pulling down someone's face mask and spraying pepper spray at him.

In addition, a supervisor who was on the scene at the May 29 incident will be transferred, Shea's statement said.

"These incidents … are disturbing and run counter to the principles of NYPD training, as well as our mission of public safety," Shea said in the statement. "The actions by these officers stand apart from the restrained work of the thousands of other officers who have worked tirelessly to protect those who are peacefully protesting and keep all New Yorkers safe."

Both cases have been referred to the department advocate for disciplinary action, Shea said.

"There are other matters that we are actively investigating and we will be transparent as the process continues," Shea said in the statement.

Meanwhile, rain Friday evening appeared to have dampened protests in parts of Manhattan. But hundreds of cops staged in groups on side streets, under restaurant awnings, waiting on courthouse steps and beyond.

Earlier Friday, New York City Mayor Bill de Blasio said that demonstrations across the city Thursday were largely peaceful, but he acknowledged some violent clashes between protesters and police that he said would be investigated.

“There are things we need to fix in the NYPD, but the overall restraint levels were clear,” he said at his Friday morning briefing.

De Blasio, who on Friday resisted calls for a clawback of the 8 p.m. citywide curfew he instituted to quell earlier looting, added that “there were few or no attacks on property" Thursday night.

"There were, however, some attempts at violence, and this is the point I always want to make to people: We’ve got a very few mingled in among the peaceful protesters who aim to do violence," he said.

The NYPD said there were no initial reports of looting.

There were at least 270 people arrested, a slightly higher tally than the day before but lower than the more than nearly 700 arrested during Monday's night protests.

The NYPD, cautioning reports still were arriving, could not say Friday morning how many of the individuals arrested were demonstrators protesting the death of George Floyd..

The NYPD did not immediately respond to a request for a breakdown of charges associated with protest arrests, including how many were for alleged curfew violations.

A Newsday reporter saw the police forcefully confronting peaceful protesters — without warning and sometimes resulting in arrest — in Manhattan Thursday night. The protesters had been accompanied by the police for hours when suddenly hundreds more appeared and began making arrests.

NYCLU executive director Donna Lieberman said in a news release that the city's 8 p.m. curfew should be lifted because it had led to officers interrogating people for their political views.

“Police officers continue to meet protesters and bystanders with violence and brutality," Lieberman said. "Curfews across the state have only emboldened officers to put people’s lives in danger, suppress the right to protest, and wrongfully arrest New Yorkers."

Lieberman added: "It is troubling that law enforcement officers are arresting people and questioning them about their political beliefs. The NYPD has been previously reprimanded by a federal judge for such practices. The NYPD and FBI cannot mass arrest New Yorkers and conduct an intelligence-gathering operation on First Amendment-protected activity."

De Blasio said the curfew would stay in place through Sunday because it had been successful in stopping the widespread looting last Sunday and Monday.

“Where our officers take an action that raises a valid concern in each and every case, there must be a full investigation and where discipline is warranted it needs to be speedy,” de Blasio said. “There are certainly things we have to do better.”

Asked about the arrests along 149th Street in the Bronx — including of legal observers wearing bright green vests and hats identifying themselves as such — Shea said the protest in that area was advertised as a violent one.

Shea acknowledged "there could have been some innocent people caught up in it," but said police acted because people were bringing "guns, weapons and gasoline" to the gathering.

Cuomo, who earlier this week announced a curfew in a joint statement with de Blasio, said he supported the decision of de Blasio and other mayors to institute curfews to prevent looting.

"And look, it has been better," Cuomo said Friday. "It was on the edge of chaos, and now you have people who, a police force in the city, which is adequately deployed. They have a better management and you have not seen the looting the last couple of days."

Cuomo also spoke about a video showing a police officer in Buffalo pushing an older man to the ground. The man's head began bleeding, and while one officer attempts to come to his aid, he's directed to keep walking. Officers involved in the incident have been suspended, and Cuomo said the city should push to fire them, and that the local district attorney should look into bringing criminal charges.

Meanwhile on Friday, protesters continued to gather in Manhattan, Brooklyn and other parts of the city as demonstrations over Floyd's death continued.

By 5:30 p.m. Friday, about 100 protesters gathered under a steady rain at Brooklyn’s Barclays Center.

Jesse Bowman, 79, of Prospect Heights, who marched in the '60s civil rights movement, said he was heartened by the youth of his fellow protesters and the national scope of the demonstrations.

“I never thought I’d see people in Idaho or the hills of Kentucky protesting for a black man,” he said.

The crowd was far smaller than on other nights this week and the mood was less tense. None of the roughly 50 police officers standing in a gated area in front of the arena wore their riot helmets.

However, the number of officers grew substantially as the 8 p.m. curfew neared.

Conrad Fischer, 56, a Russian Orthodox cleric affiliated with Union Theological Seminary, said he empathized with “the deep spiritual feeling” of being treated as if you’re “worth less than other people.”

But he said that some of the antagonistic rhetoric from protesters, who have called NYPD officers racists and referred to them with vulgarities, was counterproductive.

“‘Love your enemy’ does not mean you have to like them,” Fischer said. “It means you have to take care of them because they’re your fellow human being.”

As the fifth night of the curfew loomed, few people, including demonstrators, were on Manhattan streets of the neighborhoods around SoHo, Union Square and New York University. Several small groups appeared to be walking home with Floyd protest signs at their side.

Entry streets to SoHo — a neighborhood looted earlier this week of luxury stores — remained blocked or restricted by gates and cops.

At least 50 NYPD vehicles, some unmarked, idled in the vicinity of Union Square near an empty prisoner bus, among those used to transport arrestees during the unrest.

Thirty minutes after curfew, protesters left Brooklyn's Fort Greene and marched down to the Manhattan Bridge, where they met a column of police in riot gear — the first show of might by officers in a relatively low-key night.

At about 9:30 p.m., about 200 marchers were halted at Grand Army Plaza, where they were met by about 100 police officers in riot gear. About 50 bicyclists were at the front of the crowd of protesters.

It ended quietly and orderly as police surrounded protesters but left open a sidewalk for them to leave.