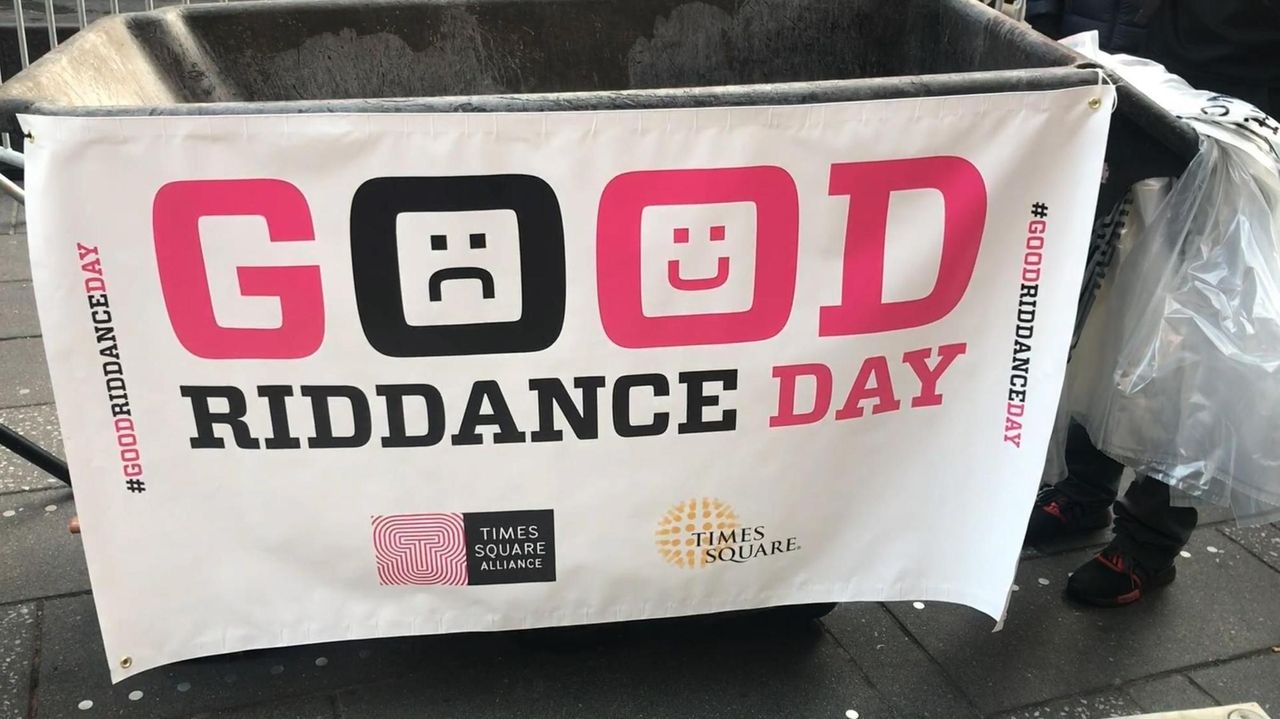 A “Good Riddance Day” event had its 13th year in Times Square, on Saturday, drawing dozens wishing 2020 will be better than 2019. Credit: Newsday / Matthew Chayes

Auld Lang Syne these are not.

For 2020, Chris of New York wanted to shred “IMPOSTER SYNDROME,” a wish taped up on a piece of paper in Times Square on Saturday. For Alex of West Virginia, “TRANSPHOBIA” was to be shredded. “COLLEGE TUITION” for Dixie, “SELF DOUBT” for Victoria, and, per an anonymous apparent dig at Bill de Blasio: “NEW YORK CITY MAYORS WHO DON’T LIKE THEIR CITY!”

A “GOOD RIDDANCE DAY” event — inspired by a Latin American custom in which New Year’s celebrants stuff dolls with bad memories from the waning year before setting the objects aflame — had its 13th year in Times Square, drawing dozens wishing 2020 will be better than 2019.

“We’re using this massive shredder right here to shred it right before your eyes and cleanse yourself of the bad things from 2019,” said actor Jonathan Bennett, who starred in 2004's “Mean Girls” and hosts "Halloween Wars" on Food Network.

Catharsis aside, the event doubled as a free-shredding opportunity for personal papers like bills, old receipts, password lists, IRS audit notices, all of which and more piled up in a wheeled cart to be fed into an even bigger shredding truck.

For ceremonial purposes Saturday, would-be revelers filled-in-the-blank on a piece of white paper ("I want to say Good Riddance to:"), signed a legal release form absolving the Times Square Alliance of liability, and waited on a line between 45th and 46th streets to climb up to the stage to shred 2019’s worst.

The event was a prelude to the ball drop Tuesday night ushering in the New Year at Times Square.

"There's something we have to do before we think about what we want for ourselves or for the world in the New Year," said the Alliance's president, Tim Tompkins. "We have to let go of all that junk that we had to deal with in 2019."

Janet Restino, who lives a block away, brought old bank statements, financial reports, paperwork with her social-security number, epistles, calendars and “receipts, lots of receipts.” (“I was a pack rat … you never know what you might need it for,” she said.)

When it was her turn to step up to the stage for the shredding ceremony with Bennett, she said she wanted to say “GOOD RIDDANCE” to President Donald Trump and Republican Mitch McConnell, the U.S. Senate majority leader.

“I think they’re both terrible for the country and the world!” said Restino, 71.

Terence Franco, 30, an auditor living in Canada, recently moved from Dubai and wasn’t used to the punishing work culture here, he said (“North Americans are very hard workers compared to the Middle East”) or the climate ("It’s too cold in Toronto!”).

What people wished adieu to was a range of whimsy, snark, earnestness, introspection, emotion and confession.

The event grew solemn as 18-year-old Jose Maria Luque of Quito, Ecuador, stepped onto the stage with his “GOOD RIDDANCE” wish.

He said he hoped 2020 would be the year he’d be able to fully recover from his eating disorders, for which he’s been repeatedly hospitalized. He said he wanted to be a role model for others struggling with the condition, and for his brother.

Tears dripped down 9-year-old Joaquin Miño’s cheeks as he spoke into the microphone his 2020 wish: his brother’s recovery.