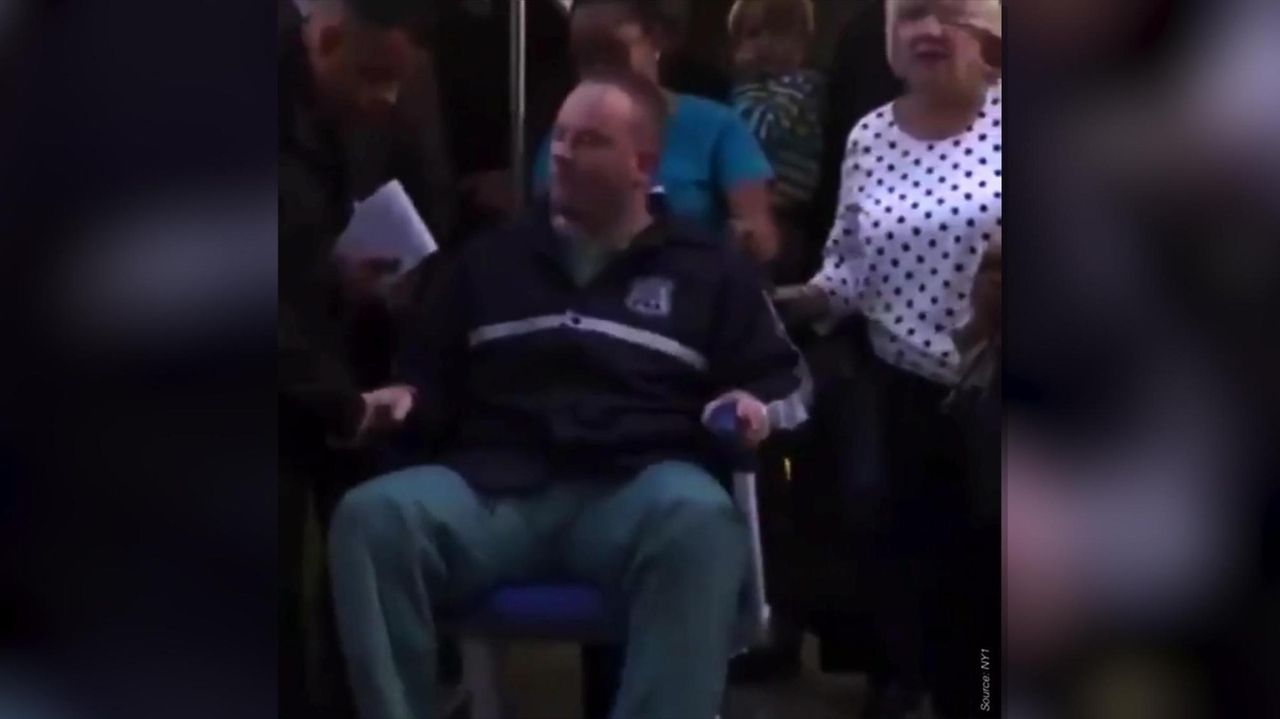 NYPD Officer Christopher Wintermute is wheeled out of Mount Sinai St. Luke's Hospital after being treated for a gunshot to the chest. He was saved by his bullet-resistant vest while responding to a call about a man acting erratically at a Harlem apartment building early Wednesday. Other officers fired at the suspect, killing him, according to Police Commissioner James O'Neill. Credit: NY1

A naked man armed with a handgun was shot dead by NYPD officers early Wednesday in Harlem as he struggled with a cop who was also hit by gunfire but saved by his bullet-resistant vest, the police commissioner said.

Whether the man who fought with the officer fired any bullets "was part of the investigation," Police Commissioner James O'Neill said at a predawn news conference.

The shooting was the fourth time in just over a week that NYPD officers shot a suspect during an encounter, and the third involving a fatality.

O'Neill said that at 1:51 a.m. Wednesday, eight uniformed police officers from the 32nd Precinct responded to a 911 call from a woman in an apartment on Frederick Douglass Boulevard. She had reported that a man was harassing her, banging on doors and breaking glass, he said.

As the officers searched the apartment building's second-floor hallway, one officer, identified as Christopher Wintermute, 34, encountered the naked man, who pointed a 9 mm handgun at him, O'Neill said. A violent struggle ensued, the police commissioner said, before "shots were fired" and gunfire hit the vest-wearing officer in the chest.

"The officer yelled for help as the struggle continued and the other officers discharged their firearms, striking the suspect several times." O'Neill said during a news conference at Mount Sinai St. Luke's, the hospital where Wintermute was being treated.

The officer was also punched "numerous" times during the struggle, the police commissioner said.

He said the suspect was pronounced dead at Harlem Hospital.

An officer's body-camera captured the struggle, which O'Neill said he had watched. The NYPD did not release the footage.

O'Neill declined to say how many officers fired or whether the naked man discharged his weapon, saying those questions are "all part of the investigation."

Asked whether the shooting was being investigated as a case of "friendly fire," NYPD spokeswoman Sgt. Jessica McRorie said in an email that "the investigation is active and ongoing."

The officer's labor union, the Police Benevolent Association, tweeted out a video of Wintermute leaving the hospital to applause later Wednesday morning.

The officer has worked for the NYPD since 2012, O'Neill said.

De Blasio said he visited the officer at the hospital along with the man's wife, who is also an NYPD cop. The couple met at the police academy.

In the earlier shootings, an NYPD sergeant shot a man to death Thursday afternoon in the Bronx after a vehicle stop turned into a physical struggle. It was the second fatal shooting by the NYPD in less than 48 hours, and the third overall last week.

In the span of four hours Tuesday night into early Wednesday NYPD officers were involved in a pair of shootings. Police fired at suspects, one leading to the death of a just-paroled ex-convict in Brooklyn, and the other wounding an armed man in the Bronx, the NYPD said.

In the Brooklyn shooting Oct. 15, two plainclothes anti-crime officers on patrol at about 7:55 p.m. near the Gowanus Houses, encountered Nasheem Prioleau, 33, firing a handgun at another person on Baltic Street, police said.

Hours later, just after midnight Wednesday in the Bronx, officers responded to a ShotSpotter alert and 911 call about a man firing shots in the 225th Street subway station in the Gun Hill Road section.

NYPD Assistant Chief Larry Nikunen, commander of Patrol Borough Bronx, said at the time that officers saw a man with a handgun on the southbound platform of the No. 5 IRT line.

Officers encountered the man and “two of the officers then fired several rounds at the suspect striking him in the shoulder,” Nikunen said.

A .380-caliber semi-automatic gun was recovered at the scene next to the suspect, identified as Richard Richard, 27, police said. Richard was taken to NYC Health + Hospitals / Jacobi for treatment and released later that Wednesday into police custody, the NYPD said.