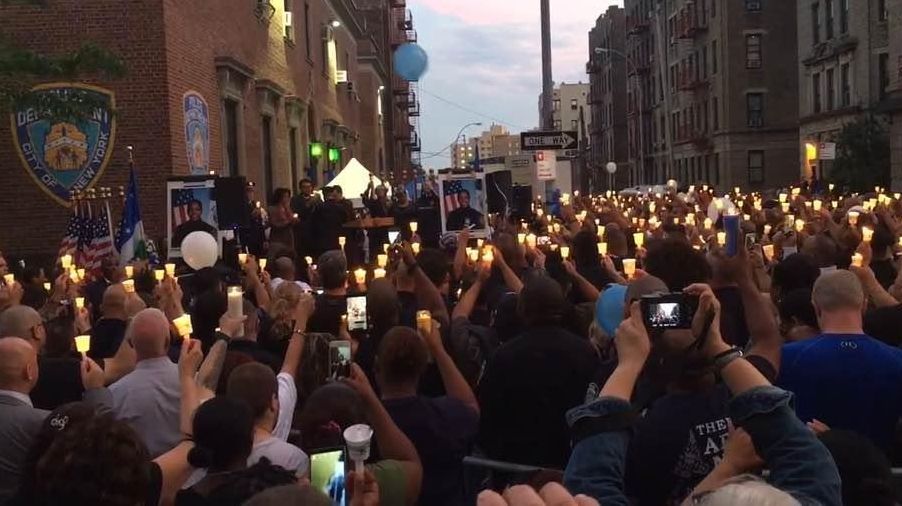 A bagpiper from the 46th Precinct in the Bronx where police Officer Miosotis Familia worked plays "Amazing Grace" at a vigil outside the station house. (Credit: Newsday / Matthew Chayes)

Hundreds gathered Saturday for an hourlong sunset vigil honoring Miosotis Familia, the NYPD officer slain by a mentally ill gunman in the Bronx on Wednesday, outside her 46th precinct station house — three blocks from where she was shot.

“We never forget. We owe it to police Officer Familia and her wonderful family to never forget her and always honor her,” Assistant Chief Larry W. Nikunen, commanding officer of patrol borough Bronx, told the mourners Saturday night in front of the precinct.

Nikunen said he hopes the respect for police officers “continues well beyond Tuesday . . . and transcends the borders” of the precinct.

Patrick Lynch, president of Familia’s labor union, made an oblique reference to a protest movement that seeks to hold police officers accountable for misconduct.

“Each and every day, police officers walk into this building and sacrifice of themselves. We have to stop demonizing those that wear the shield,” Lynch said.

Lynch and other police union leaders have blamed the movement for endangering police officers.

Her sister Adriana Sanchez held a rosary Familia brought back from Italy for her. Sanchez said their family had seven sisters and three brothers.

“This is so unreal to me. It’s such a big loss,” her sister said.

“Her kids were so close to her,” she said.

“She was an exceptional person. And I know she’s up with God looking at us,” Sanchez said.

Black mourning bands stretched across her colleagues’ shields, who were among those in front of the 4-6, as it’s called in police lingo, the station that patrols the central part of the borough’s western section.

Familia’s colleagues released blue and white balloons during the vigil.

Benzena Lawson, 72, who lives in an apartment across from the precinct house, said she was motivated to attend by outrage at the killing, sympathy for Familia’s family and respect for Familia.

“All she was doing was her job,” said Lawson, who had met Familia through the precinct’s community council. “It’s just sad the way she died. Executed.”

The public learned of the vigil via a flyer posted online by Nikunen.

Familia, a mother of three, was slain by a mentally ill gunman as she sat in a police vehicle at the intersection of East 183rd Street and Creston Avenue in the Fordham Heights section, according to the NYPD. The gunman, Alexander Bonds, was shot dead minutes later by other NYPD officers after he drew a .38-caliber handgun when confronted.

Rites for Familia, 48, are set for Monday and Tuesday at the World Changers Church in the Bronx, according to the NYPD. The wake is Monday, from 2 to 4 p.m. and 7 to 9 p.m., and the funeral Tuesday at 10 a.m. The NYPD predicts that the funeral will draw 25,000, close to the number who attended rites for Wenjian Liu and Rafael Ramos, officers who were ambushed and killed in December 2014 by a mentally ill man who had posted on social media the desire to be “putting wings on pigs.”

The funeral for NYPD Officer Miosotis Familia is expected to draw close to the 25,000, officials said.