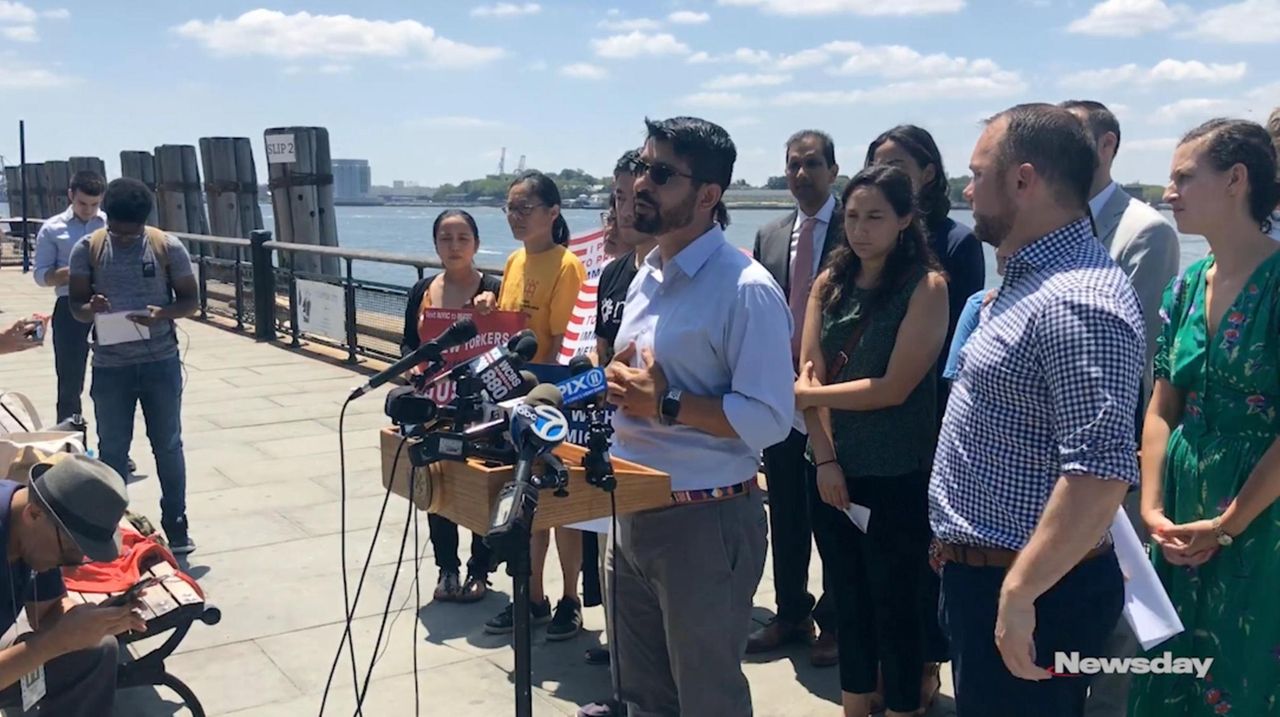 Saturday's attempts — two in Brooklyn's Sunset Park and one in Manhattan's East Harlem — did not result in any detentions because those being sought didn’t answer the door or otherwise couldn't be located, said Bitta Mostofi, commissioner of Mayor Bill de Blasio’s Office of Immigrant Affairs.

On Long Island, there were reports since Friday of the same agency, U.S. Immigration and Customs Enforcement, having personnel out in Brentwood, Freeport, Hempstead, Huntington Station and Port Jefferson Station, according to Anita Halasz, executive director of the advocacy group Long Island Jobs with Justice. One of those reports involved an effort to detain people, Halasz said.

The report said agents were seen in Brentwood at about 9:30 a.m. Friday knocking on a person’s door. The agents, who arrived in unmarked vehicles and wore black vests bearing “POLICE” and “ICE,” had asked the person who answered whether a certain person lived there, Halasz said.

It was unclear whether the agents' activity in the city and on the Island were part of the nationwide effort announced by the administration of President Donald Trump to detain about 2,000 immigrants who are living in the country illegally and who previously had been ordered deported after not showing up to court.

Those dragnets are reportedly to begin Sunday in 10 major cities nationwide, including New York City, and are similar to operations that ICE has conducted since 2003 that often result in hundreds of arrests.

ICE did not respond Saturday to a request for comment. In a statement Thursday, the agency declined to offer specifics on the raids, but noted that "all of those in violation of the immigration laws may be subject to immigration arrest, detention and — if found removable by final order — removal from the United States."

There are about 11 million immigrants living in the country illegally, according to the nonprofit Pew Research Center.

Halasz said advocates would provide support such as food and clothing to immigrants who are affected by detentions or their families.

City Councilman Carlos Menchaca, a Democrat who represents Sunset Park, said at a news conference Saturday in Manhattan that one of the attempts in the city happened near 60th Street and Third Avenue.

Mostofi said the NYPD had not been alerted in advance to the ICE activity.

Council Speaker Corey Johnson (D-Manhattan) said that people who encounter the federal immigration agents should not open their doors unless authorities present a warrant, and should remain silent, seek a lawyer and decline to consent to any requested search.

“These are scary times,” Johnson said at the news conference, held at Battery Park.

In a phone interview, Councilman Joe Borelli (R-Staten Island), one of three Republicans in the 51-member chamber and a Trump supporter, said "every single person who is part of this weekend's raid has already been adjudicated" in official proceedings.

"These are people who have been ordered by a judge to be deported. This is not a random roundup," Borelli said, noting that the Obama administration in nearly each one of its eight years deported more people than has occurred during each year of Trump's presidency.

'We need your voice': LI vigils support immigrantsThe Lights for Liberty vigils in Nassau and Suffolk counties drew Long Islanders of many stripes -- immigrants and their supporters, a mix of races and ethnicities. Information effort for those at risk of deportationAdvocates launch efforts to inform Long Islanders at risk of deportation in advance of raids planned for this weekend. Lawsuit targets Trump's planned immigration raidsIndividual hearings sought for thousands of families facing removal because they didn't show up in immigration court.