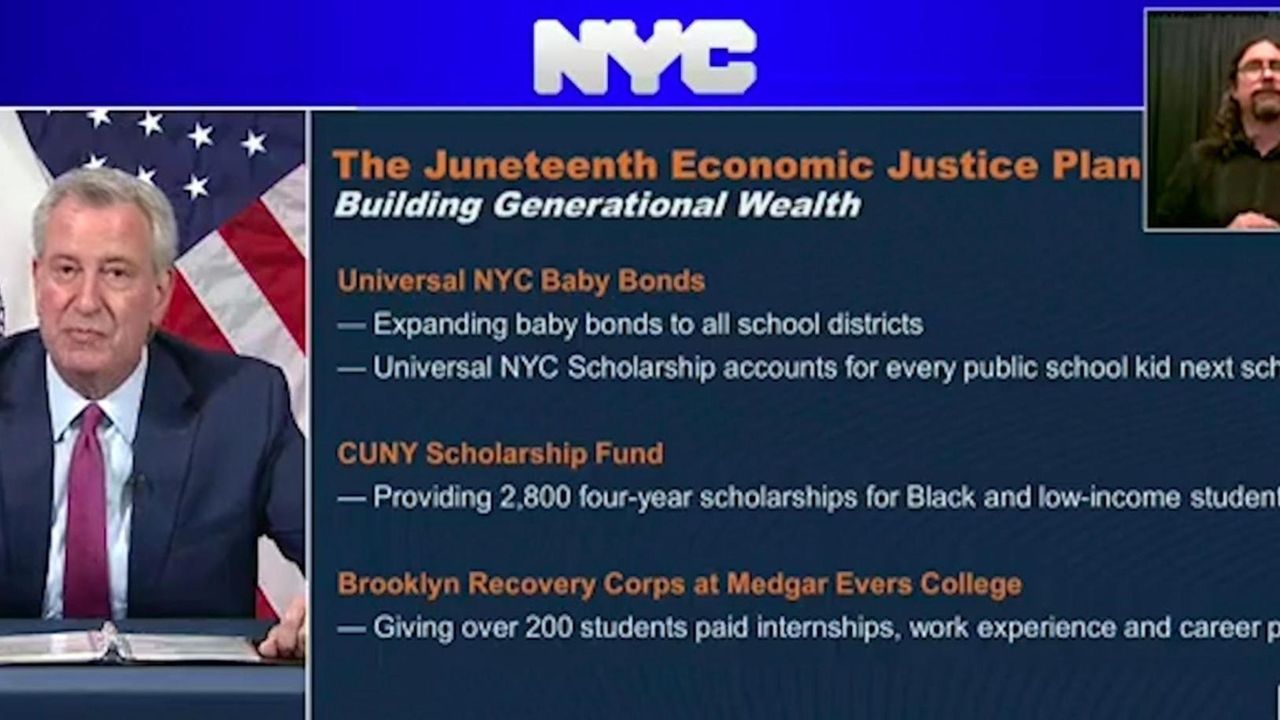 New York Mayor Bill de Blasio and other city officials rolled out a plan Thursday they said will help correct the racial and economic inequalities exposed and exacerbated by the COVID-19 pandemic.

The Juneteenth Economic Justice Plan will give an assist to Black and low-income students who aspire to go to college, de Blasio and other officials said during the mayor’s daily news briefing.

"Juneteenth is the perfect time to make an impact because Juneteenth reminds us at that moment in the 1860s, officially the laws changed but the reality didn’t change and the racial wealth gap has continued and in fact has grown," de Blasio said.

"Right now in America, the net worth of the average white family has grown to 10 times that of the average Black family, and the answer is redistribution. The answer is purposeful, focused efforts to right the wrongs," the mayor said.

— Universal baby bonds: The city will provide universal scholarship accounts for every child in New York public schools. Children entering kindergarten in September will be the first students eligible for the bonds. The plan is based on a pilot program conducted in Queens in recent years.

New York City had more slaves in the late 1700s than any other city in the United States but Charleston, S.C., Deputy Mayor Phil Thompson said during the briefing. The city had a slave market in lower Manhattan, near the East River, he said.

Wall Street continued to finance, and profit from, slavery long after New York state abolished it in 1827, Thompson added.

"Our ancestors believed that education would be the key to Black liberation because knowledge, once attained, cannot be stolen or beaten out of anyone," Thompson said. "We can use knowledge to change the world. That is why it is so right to invest in education today in honor of Juneteenth."

Rep. Jamaal Bowman (D-the Bronx), a former educator elected to Congress last year, said he had met many students who did not consider college because they thought they could not afford it. The mayor's plan, Bowman said, will help correct that.

"This is what racial equity looks like in action," Bowman said, urging mayors, governors and lawmakers to replicate similar programs in other communities. "It is not just lip service, it is legislation."

Brooke Smith, the outgoing Medgar Evers student body president and recent graduate, said her heart broke whenever she met young people who could not afford to attend college or did not know how to apply. She said the Juneteenth Economic Justice Plan will help her peers overcome some of those challenges.

"There will be a wider reach that will open doors for students, for families, and for generations to feel exactly the way I felt in June when I saw my name and received my bachelor of science in social work," Smith said.

"Education is an important component in helping to close the weatlh gap by improving opportunities for upward mobility," Smith added.

The city is hosting a Juneteenth celebration beginning Friday at 6 p.m. in St. Nicholas Park in Harlem.

Juneteenth commemorates June 19, 1865, two months after the end of the Civil War, when enslaved black people learned that President Abraham Lincoln had freed slaves in the Confederacy 2 ½ years earlier with the Emancipation Proclamation.