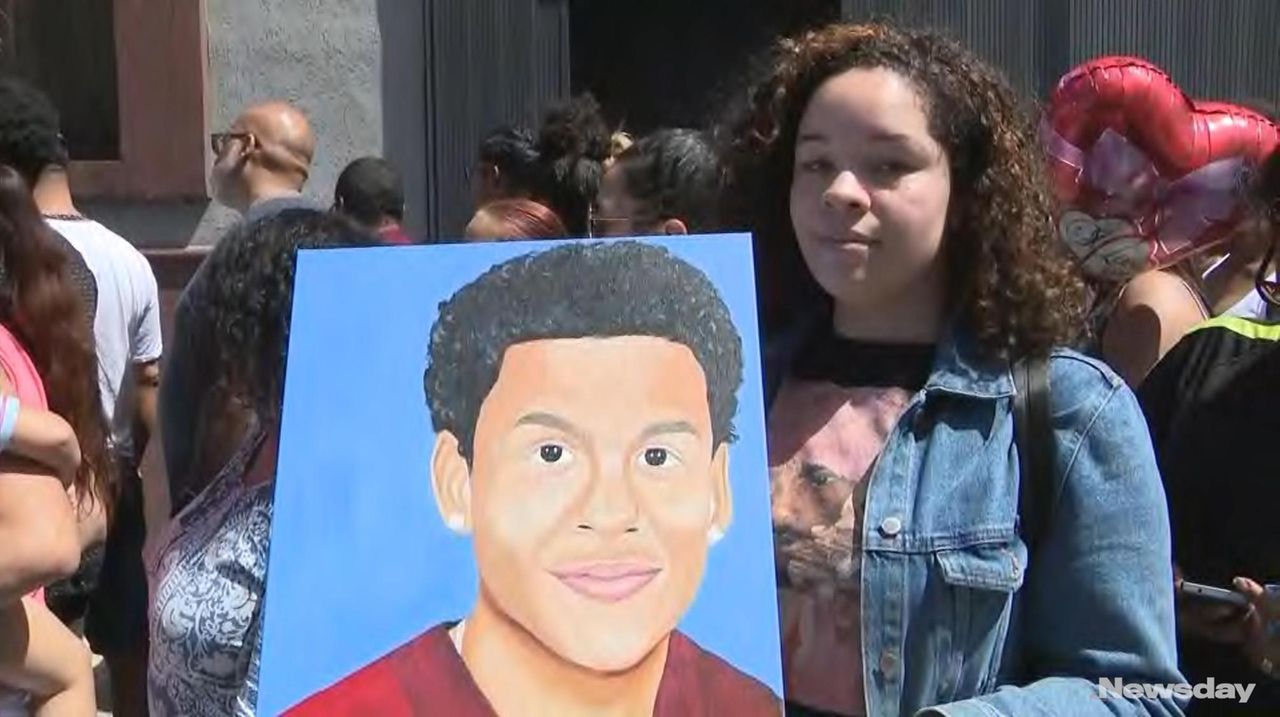 At a news conference Tuesday, June 26, 2018, in the Bronx, NYPD Chief of Detectives Dermot Shea said that a total of eight men were in custody for last week’s gang slaying of Bronx teenager Lesandro Guzman-Feliz. Shea indicated that the suspects could face federal racketeering charges. Police expected that all will be charged with murder, although they said precise charges were being worked out with the Bronx District Attorney’s Office. Credit: News 12 Bronx

Six suspects in last week’s gang slaying of Bronx teenager Lesandro Guzman-Feliz waived extradition from New Jersey and were expected to return to New York City as early as Wednesday to face charges stemming from the brutal attack, officials said.

At a news conference Tuesday in the Bronx, NYPD chief of detectives Dermot Shea said that a total of eight men were in custody for the attack. He indicated that the suspects could face federal racketeering charges, which are already being pursued in a different Bronx attack earlier this month.

Police expected that all will be charged with murder, although they said precise charges were being worked out with the Bronx District Attorney’s Office.

One suspect in the attack on Guzman-Feliz, Kevin Alvarez, 19, of the Bronx, was arrested Sunday and charged with murder, manslaughter, gang assault and assault. An eighth suspect was apprehended Tuesday, officials said.

Among those suspects coming back from New Jersey was Joniki Martinez, 24, of Freeport, according to police.

It was not clear Tuesday who is representing the suspects.

Known as “Junior,” Guzman-Feliz was stabbed to death after a group of men attacked him at a bodega on East 183rd Street and Bathgate Avenue in the Belmont section on June 20. A surveillance video captured the 15-year-old as he was dragged from the bodega, repeatedly struck with a machete and then stabbed. He ran to a nearby hospital but died from his wounds.

The attack was the latest in a spate of incidents police believe are tied to the Trinitarios street gang, a group of Dominicans who have been in long-standing rivalry with gangs such as the Bloods. On June 18, a group Shea said was composed of some suspected Trinitarios members beat and stabbed a 14-year-old boy on the median strip of the Bronx River Parkway. The youth sustained up to sixteen stab wounds and went into cardiac arrest before paramedics revived him.

Shea said that both the June 18 and June 20 attacks were connected but didn’t elaborate. He said a “treasure trove of information” was coming to police from the public.

The slaying of Guzman-Feliz, a young NYPD Explorer member who aspired to become a police officer, shocked the Bronx. Celebrities such as Carmelo and La La Anthony, Rihanna and Bronx native Cardi B weighed in with expressions of sadness over his death. Adding to the tragedy were reports that the teenager’s family received Facebook messages from the alleged killers claiming they had killed the wrong person.

At Guzman-Feliz’s wake Tuesday night, members of the Explorers program marched into the RG Ortiz Funeral Home in the Bronx to crowds outside applauding.

“It doesn’t matter,” Kennie Pabon, 22, said of the arrests. “Even if they were locked up, Junior is supposed to be with us right now.”

In the Bronx River Parkway attack, NYPD officials and federal prosecutors decided to bring federal racketeering charges against one suspect, identified as Ramon Paulino of the Bronx. In the federal criminal complaint, Paulino was charged with being part of the group of attackers who stabbed the 14-year-old victim. The complaint stated that Paulino first denied he was at the scene of the attack but later admitted participating in the assault and being a member of the Trinitarios gang.

Paulino is in custody but has a pending bail application, according to court records. His defense attorney, Jullian Harris, did not return a telephone call seeking comment.

— With Alison Fox and Nicole Brown